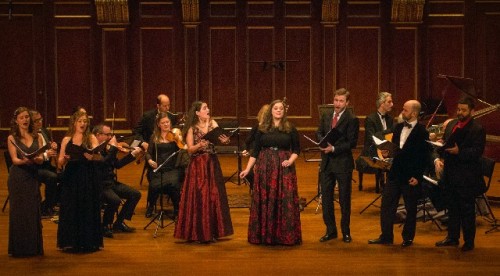 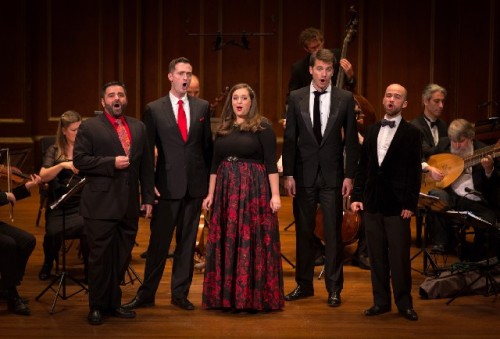 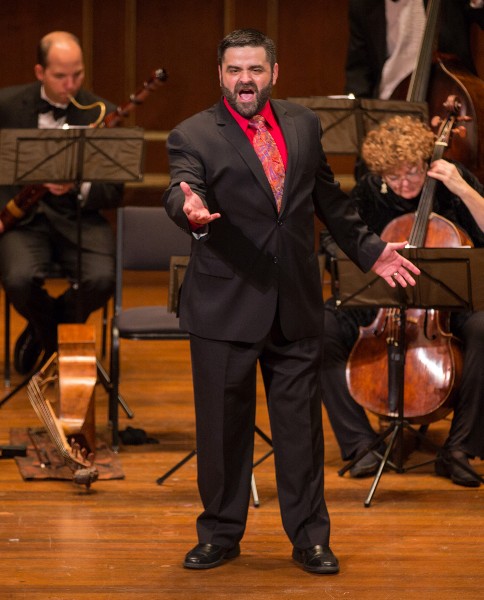 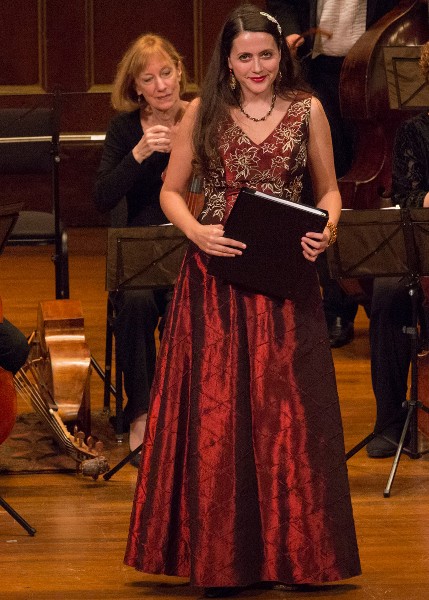 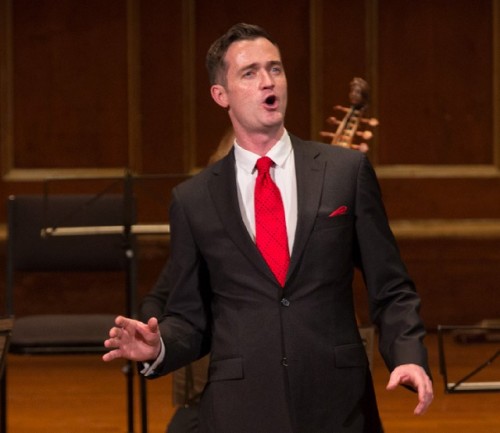 The Boston Early Music Festival made a lot of Boston area early music lovers, including this critic, very happy Sunday afternoon when it presented excerpts from the five operas it has performed since 2008 in its Chamber Opera Series. It’s rare that such sterling musicianship and understanding of dramatic values come together in opera.

A little background: The centerpiece of the biennial Boston Early Music Festival since 1981 has been a fully staged Baroque opera, usually one rarely performed or recently rediscovered. In 2008, to better create a continuity that can get lost in biennial experiences, the BEMF initiated a series of smaller scaled, semi-staged chamber operas presented Thanksgiving weekend in the New England Conservatory’s Jordan Hall. These off-year works have featured famous, frequently produced works like Monteverdi’s “Orfeo” and Handel’s “Acis and Galatea” alongside rarities such as John Blow’s “Venus and Adonis” and Charpentier’s  “Actéon.”

I don’t think I’m alone in judging them among the festival’s greatest successes in the field of opera. In addition, the smaller productions have proved easy to tour: after premiering here, its “Acis and Galatea,” for instance, traveled to Seattle, Kansas City and the Morgan Library in New York City before returning here and being done again at Jordan Hall.

This year, instead of producing another new opera in the series, the BEMF chose to present excerpts from the five works done in earlier seasons. The reason: its forces had recently given a concert version of “Niobe, Regina di Tebe,” one of its more successful fully staged productions, in Bremen, Germany, preventing them from having adequate rehearsal time for a new work. One hopes that next year they come back with another new work to add to their growing roster.

A key to the project’s success has been the group of musicians the BEMF has assembled since 2008. Young, intensely versed in the Baroque style of singing and acting, and visibly excited by the opportunity they have to do what they love for the public, they have become one of the most important corps of singers and instrumentalists performing the Baroque repertory in the world today, acting and singing together with familiarity and collegiality. Many of them were graduates of Boston’s conservatories and have in a short period of time established a national presence. Even more gratifying, several of them have forged international careers while remaining loyal to the festival that gave them their first chance.

The career of Boston-based soprano Amanda Forsythe is perhaps the model. In addition to singing many leading roles with the BEMF (Niobe in “Niobe, Regina di Tebe,” Edilia in Handel’s “Almira,” Venus in Blow’s “Venus and Adonis,” Aglaure in Lully’s “Psyché”) and Boston Baroque (Handel’s “Xerxes” and the title role in Handel’s “Partenope”), she has sung with major companies in London, Geneva, Munich, Paris, Vancouver and Seattle, and at the Rossini festival in Pesaro, Italy. As her career has grown, she has moved out of her comfort zone to sing works by Rossini and Verdi (Nannetta in “Falstaff”).

Small wonder: few singing actresses give such vocal pleasure as Forsythe. She opened Sunday’s program singing “La Musica,” the prologue to Monteverdi’s “Orfeo,” the oldest work in the opera repertoire. Stepping out of the line of singers sitting on the edge of the stage, girls to the left, boys to the right, she visibly took on her character as she reached center stage. There is not much of a character to “La Musica,” who represents the role of music in the world and sets the stage for the opera’s action, and many singers remain satisfied just singing the sweetness of her song, but Forsythe turned a concept into a  human being, illuminating every word of the text, making the audience pay attention as they might not ordinarily do to their meaning - with the sweetest of musical tones.

When she sang, “While I vary my songs, now happy, now sad,/No small bird shall move among these bushes,/Nor on these banks a sounding wave be heard,/And every breeze shall be halted in its course.” – in the original Italian, of course - you sat there silently, afraid either to move or to breathe.  Music herself was singing and full attention needed to be paid.

Another reason for the success of the series is the quality of the instrumental playing. A subset of the larger BEMF orchestra, the 13-member BEMF Chamber Ensemble is a group of crack early music musicians. Led by musical directors Paul O’Dette and Stephen Stubbs, both lutenists of renown, and concertmaster Robert Mealy, they provide stylish instrumental accompaniment to the singers who are the focus of Baroque opera. In the “Orfeo” excerpt that opened the concert, for instance, Gonzalo X. Ruiz, played his recorder with an exquisite woodiness, the entire ensemble creating a deliciously tart tonality. And in the second offering, a selection from Henry Purcell’s “Dido and Aeneas,” O’Dette and Stubbs endowed a dance tune with the irresistible rhythm and physicality of a hoedown.

A third factor in the success of the enterprise is the stage direction of Gilbert Blin, whose presence was muted in what was billed as a “concert.” But the singers he’s worked with, all extraordinary actors, remembered his direction, and acted more and better on a stage without sets and costumes than we often find in fully staged productions in companies here in Boston and elsewhere in the opera world, where stand-and-sing attitudes endure. In “Dido and Aeneas” for instance, when Aeneas follows Jove’s command to abandon Dido and continue on his journey to found a new Troy, which will grow into Rome, the wonderful bass-baritone Douglas Williams sang with such anguish that he turned the hero into a man of feelings, not just a heel abandoning the woman to whom he has pledged his love.

And so it continued throughout the afternoon. Williams, again, in “Acis and Galatea,” in which he sang the role of Polyphemus, the monstrous Cyclops – a fine irony there: Williams is movie-star handsome – contorted his face and actually turned red as he spat out the words, “Torture, Fury, Rage, Despair,” when confronted with the love of the two title characters.

Despite the murder of Acis by the jealous Polyphemus that ends the work, it is one of Handel’s sunniest compositions, and Handel is one of the sunniest composers in opera’s long history. The opening excerpt, a chorus, “O the Pleasure of the Plains,” was so joyously sung it brought tears to my eyes. That led into an aria by the sea-nymph Galatea, sung with sensitivity by soprano Teresa Wakim, in which a pipe played by oboist Kathryn Montoya, mimicked bird song, which Wakim in turn imitated in her singing, creating a delicious moment of bird duet on stage.

As the shepherd Acis, tenor Aaron Sheehan sang with the combination of sweetness of tone and dramatic passion that is his hallmark. He sang his aria, “Love sounds th’alarm and Fear is a-flying!/When Beauty’s the Prize,/what Mortal fears dying?” with ringing tone and noble bearing.

I could go on: the afternoon was structured so that each of the soloists had at least a moment to shine. In both “Venus and Adonis” and “Acis and Galatea,” tenor Jason McStoots delighted in his comic turns. And in “Acis and Galatea” – I can’t seem to leave this opera! – tenor Zachary Wilder sang his aria with sweetness and tenderness.

Stepping up his performance to a higher level than I previously remember – was I not paying attention - was baritone Jesse Blumberg, who sang Adonis’s death scene in the Blow work with exquisite pain.

And in smaller parts, Thea Lobo and Danielle Reutter-Harrah, a first-time singer with the chamber group, which shows that its membership is not static, showed that they were ready for bigger roles in the future.

A special word for the chorus, which was composed of the soloists when not in the spotlight: Its work was superb throughout, but in Adonis’s death scene, especially, it was heartbreaking.