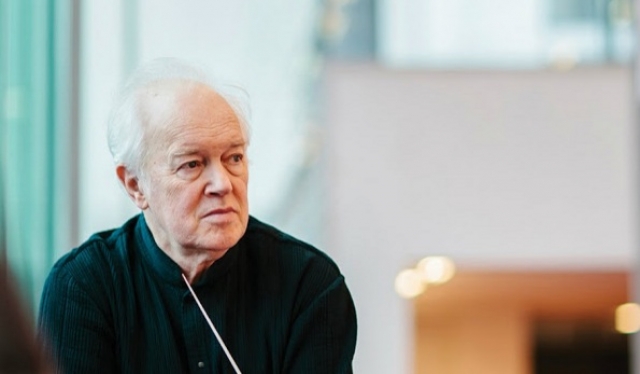 Edo de Waart conducts the New York Philharmonic
Edo de Waart is currently music director with the New Zealand Symphony Orchestra and also led the Milwaukee Symphony Orchestra in recent years. It is to the Dutch conductor's credit that he chose to keep the first work on the bill: a world premiere. This piece was Evening Land by the Danish composer Bent Sørensen and commissioned through the Philharmonic's Kravis Prize for composition. Mr. Sørensen has won several awards in recent years. He is a rising composer who proved to have a lucid and important voice.
According to the composer, his tone poem was inspired by both the moody landscapes of Denmark and the vast and intimidating canyons of New York. It was cast in three contiguous movements. The first notes swelled from an almost silent beginning, with Sheryl Staples’ violin playing so quietly that people sitting around me did not realize the music had actually begun. Using a massive orchestra, this work swelled slowly to an outsized proportion,  rising and rolling forth dark waves of sound. A faster middle section proved to be a false dawn and the work returned in the same direction with Ms. Staples having the final word.
Next, the orchestra was joined by pianist and honorary Philharmonic member Emanuel Ax to play the Mozart Concerto in D Minor. Although written at a relatively sunny, stable point in Mozart's brief, tumultuous  life, this is the stormiest of the major Mozart concertos. It stands apart from the others, a brooding, emotional work that predicts the future thunderings of Beethoven and Brahms.
Ax played this most romantic of Mozart's concertos with a classical restraint, engaging in intellectual discourse with his fingers against Mr de Waart's supple accompaniment. The long opening movement unspooled with the crispness and clarity of a recording, with Ax's fingers moving nimbly through the massive development section and the stormy recapitulation. The slow movement allowed for further discourse with the piano seeming to sigh against weeping strings. The finale was stormy and triumphant, with Ax riding herd over whatever demons caused Mozart to create this concerto in the first place.
The Second Symphony of Johannes Brahms suffers from its ubiquity. It is almost impossible to escape this genial work on the concert stage in the course of a season. Furthermore, the famous second subject of the first movement has been instrumental in the raising of children around the world--it is known universally as "Brahms' Lullaby." Due to these factors, this most cheerful of Brahms' four symphonies can be something of a snooze.

Under de Waart, the Philharmonic made this work thrilling, an exercise in moderation of tempo and observation of form. Not only did the work flow wittily and engage the listener, but the sense of thematic unity between the movements has, to these ears, never been stronger. Indeed, the appeal here was the repeated sound of church bells, intervals of a descending series of major thirds that elevated the soul. For once this well worn war-horse of a work provided just what the composer intended, a transcendent and elevating experience. (Reprinted courtesy of Superconductor).
Back to Front Page Section Home