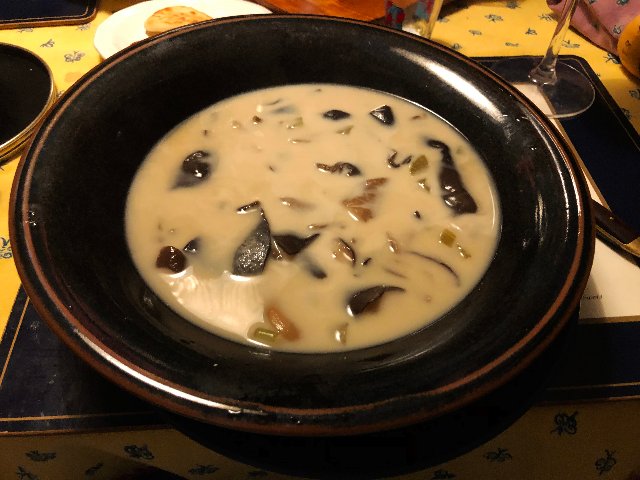 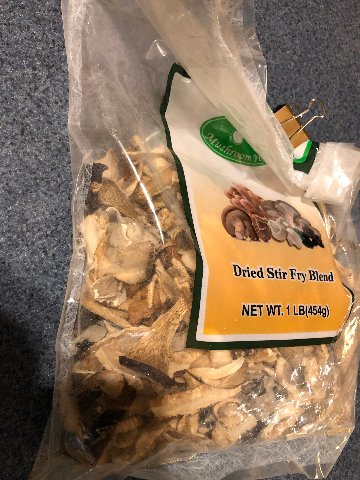 Our more modest one pound bag. 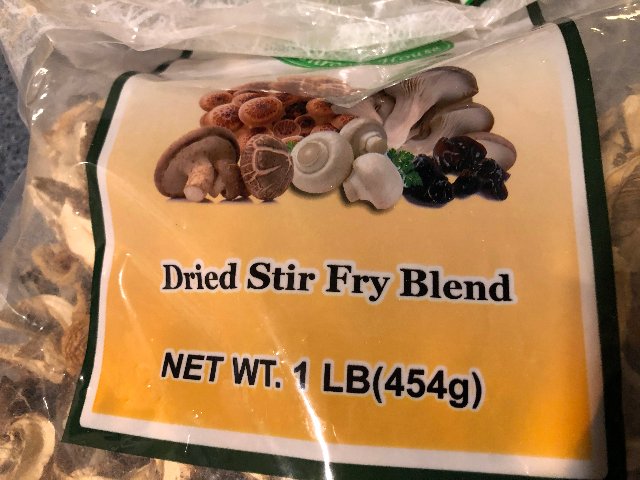 A variety of slices mushrooms. 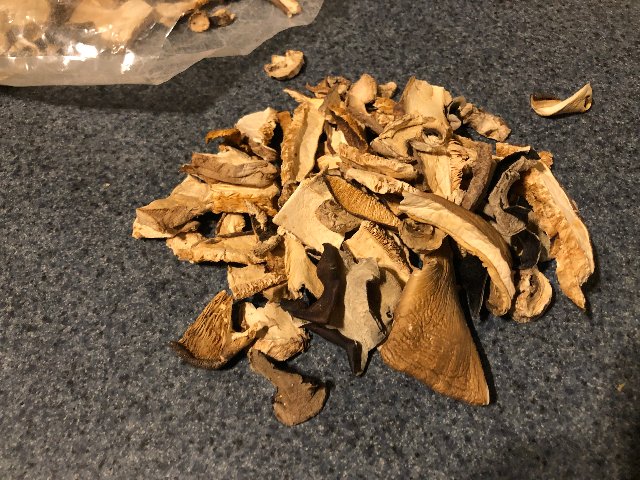 Ready to be soaked. 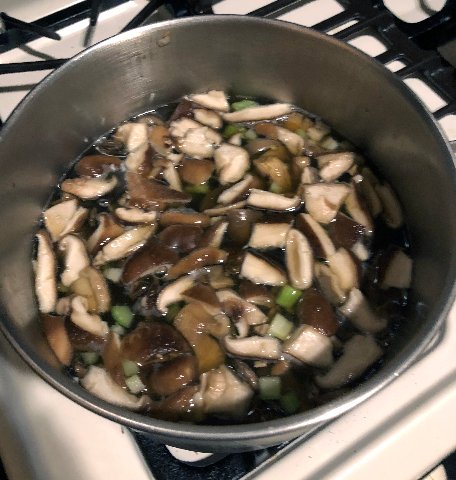 On a whim I opted for dried mushrooms.

That started with an Amazon search. There were quite a few offerings.

It is always helpful to check the reviews. Quality and price varies.

After some deliberation I sent five pounds of dry shitakes to my sister Pip. She’s a vegetarian and with her Russian husband, Yuri, they forage for them.

Apparently there was a good season this year.

When they arrived Pip was floored. For a sense of scale, I asked her to send me a photo. That’s Yuri embracing what’s in essence a large pillow packed with them.

Given that there is so much I suggested that she might regift, zip lock bags to her friends. Why not share the wealth.

She has started using them and says that they are quite amazing. For her, mushrooms are a meat substitute and she liked the chewy texture.

For our household, and a couple of others, I ordered a more modest, one-pound selection of stir-fry mushrooms. The quantity was less daunting but a pound goes a long way.

For meals this week we experimented.

Based on research, it was advised to start with a thorough rinse. In a colander I hand washed a generous portion. They are known to have grit but ours were quite clean.

In a large bowl I covered them with room temperature water. In a couple of hours they expanded several fold. Most importantly, there was dark, flavored water that was essential to the broth.

That first night about half were used for a stir fry with shrimps over rice.

In the wok I started with oil, minced ginger, and garlic. To this I added the mushrooms and shrimp with a dash of light soy.

Overall, the dish was a success but Astrid suggested that some of the mushrooms were tough. Next time, it was better to boil them to soften before adding to stir fry. She also cut them into smaller pieces as the variety varied greatly in size.

There were several kinds in the pack. We recognized chanterelles and shitakes. But there were large, black, thin, flat ones. They had a different texture and quite interesting at that. It seems they are common in Chinese cuisine.

On another night we had fresh cod. We try to have fish at least once a week. With that I stir-fried baby bok choy. To which I added a generous amount of  mushroom water as well as ginger, garlic, and light soy. That definitely enhanced the flavor.

For our third adventure I experimented making mushroom soup. We had refrigerated a large jar which Astrid had cut into smaller pieces.

That went into the pot. To which I added three stalks of celery finely chopped and minced ginger. Added to the reconstituted mushrooms I chopped fresh shitake. That proved to be a good idea. I added  carton of low-fat chicken stock. That thinned the mushroom water and made the resulting broth milder and less overwhelming.

At the table, I added some heated half and half for a creamy texture. It resembled canned mushroom soup but without the thickening of flour. Our version was thin and gluten free. But you might prefer something to thicken it.

Most of all we are having fun. It’s great to add some adventure to our meals and we will try to come up with other variations.

It’s likely that we will soak and keep a jar in the fridge just to be handy. A splash of juice is a great flavor-enhancer and substitute to cut back on soy and salt. Having mushrooms on hand is great to perk up just about meal. You might toss them on pizza or add to a pasta sauce.

The possibilities are endless.

When we finally run out, I’m tempted to go for a five pound sack of shitakes with lots to share with friends for the holidays.