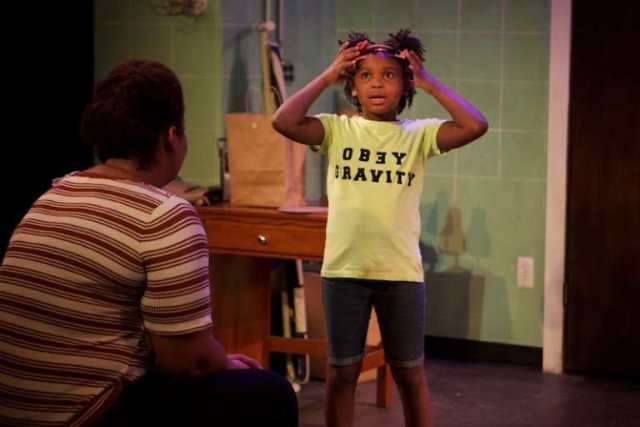 Haskins and Hall as Bird and Suhaila. Photo by Jonathan L. Green. 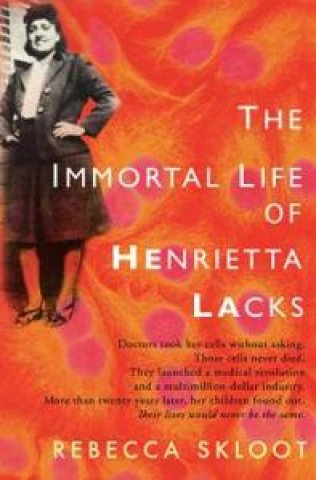 Sideshow Theatre accomplishes a lot on a small stage in its world premiere production of HeLa by J. Nicole Brooks at the Greenhouse Theater Center. They dramatize the suffering and painful death of a poor African American woman from cervical cancer in 1951 and the scientific advances her miraculous cancer cells brought about. (We now know this woman was Henrietta Lacks and her cells were taken without her permission and without compensation to her family.) They also tell the story of a super-smart young girl entranced with science and her female relatives who go through their own cancer ordeals.

Eight-year-old Ayah Sol Masai Hall plays Suhaila, an adorable science whiz kid who lost her mother to cancer and now lives in Chicago with her Aunt Bird (Nicole Michelle Haskins). The play opens in 1981 as Suhaila, age 5, is trying to watch a broadcast of Carl Sagan’s “Cosmos” on a small TV.

The scenes in HeLa go back and forth in time from 1951 to 1981-84 and finally 2001 when Suhaila, now an aerospace engineer, visits her Aunt Bird, who is suffering from cancer. Other family members who move the Suhaila story along are Big Titty Pat (Carolyn Nelson) and Uncle Steve (David Lawrence Hamilton), Bird’s boyfriend and later her husband.

The realistic scenes 30 years apart are interspersed with distant future appearances of Jata (Deanna Reed-Foster), a pilot in space, perhaps formerly human. She’s costumed in everything metallic, sometimes wears a space helmet and enters through center-stage doors on what might be a flying saucer. Her trippy monologues tell us she is not of the earth any more. For instance:

Who cares about time?
Time is a construct.
Time is a thief
That’s what I remember
they say down there on that pale blue dot, Infested by gravity.
But why do I worry about what they say? I’m not there any more.
Don’t quite know where the fuck I am but…
I’m out here.
Out here like a Sun Ra record
Out here like a muffucka.
I am.
I be.
I am…

Samples from David Bowie’s ‘Space Oddity” (“Ground control to Major Tom ….”) are heard from time to time and in fact, Major Tom the Action Man (Matt Fletcher), appears in one scene to exchange space philosophy with Jata.

In 1951, we meet a nervous young woman who arrives for a medical exam at Johns Hopkins Hospital. She has just had her fifth child and her intermenstrual bleeding tells her something is seriously wrong. The patient (Haskins) is not named and Henrietta Lacks was never identified as the source of the tissue now known as HeLa. The nurse (Ann James) interviews her briskly and the doctor (Matt Fletcher) examines her. In later scenes at the Hopkins Colored Gynecology Unit, other doctors (Fletcher) remove tissue samples from her cervix and cancerous tissue from other organs.

Dr. Gey, a cancer researcher (Fletcher) is interested in the HeLa cells when he discovers they do not die immediately after being removed from the body, as other human cancer cells do. Not only do they stay alive, they multiply at an amazing rate, doubling every 24 hours. This is the “immortal life” of Henrietta Lacks. Her cells have been divided and sold and resold and have been important in medical science. According to Johns Hopkins,the cells have been “used to study the effects of toxins, drugs, hormones and viruses on the growth of cancer cells without experimenting on humans. They have been used to test the effects of radiation and poisons, to study the human genome, to learn more about how viruses work, and played a crucial role in the development of the polio vaccine.” Her cells were essential in medical advances such as cloning, gene mapping and in-vitro fertilization.

The previously unknown story of Henrietta Lacks and her amazing cancer cells became known because of journalist Rebecca Skloot’s 2010 best-selling book, The Immortal Life of Henrietta Lacks. Skloot spent 10 years researching and seeking out Lacks’ surviving family members. An HBO film based on Skloot’s book and directed by George C. Wolfe was released in 2017.

Jonathan L. Green directs HeLa with style and his staging makes good use of the Greenhouse’s main stage. The actors play multiple parts and their capable performances are marked by those of Hall, Haskins and Hamilton.