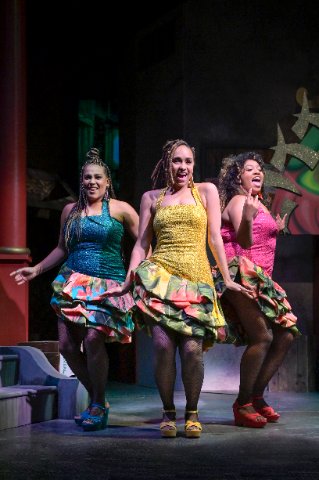 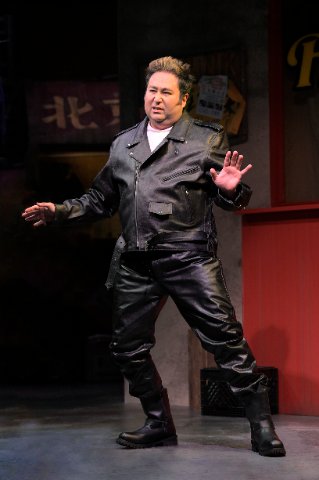 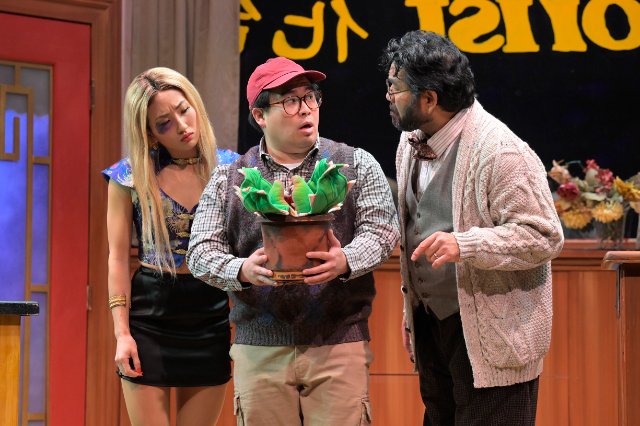 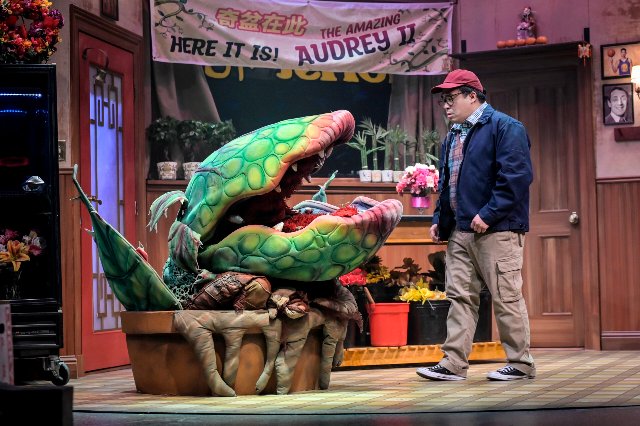 Phil Wong as Seymour. All photos by Kevin Berne.

Okay – let’s cut straight to the chase.  The unique chronical of “Little Shop of Horrors” is laugh-out-loud funny; the music is foot-stomping energetic; the production is superb; and the performances are great.  Did I miss anything?  If you see this TheatreWorks production and disagree, check with your physician to make sure you have the pulse rate of a sentient being.

From its humble beginnings as a bargain basement budgeted B-film by Roger Corman in 1960, the cult favorite “Little Shop of Horrors” mutated into a Broadway musical after other iterations.  This production is set in San Francisco Chinatown, which allows the addition of a little local color on the stage, though nothing is changed in the text.

With its prologue and the orienting song “Skid Row (Downtown),” the audience is already hooked on a propulsive soundtrack and expecting that two hours of relentless entertainment will follow.  Alan Menken’s music and Howard Ashman’s lyrics stand on their own, but they add little lagniappes to many numbers with a sampling of period songs as well.  The refrain of Petula Clark’s “Downtown” and the iconic guitar riff from The Knack’s “My Sharona” are the most obvious, but you wonder how many others the composers had fun coyly slipping in?  Do I detect a hint of “Beauty school dropout” from “Grease” or Dan Hill’s “Sometimes, when we touch” and more?  Or is it an illusion?

The opening numbers and several others are delivered by a trio of young women whose character names are Chiffon (portrayed by Alia Hodge), Crystal (Naima Alakham), and Ronette (Lucca Troutman).  For those familiar with ‘60s pop/rock music, perhaps you’ll see a naming theme!  You’ll also experience the sounds of a bluesy, doo wop, girl group on steroids.  They act as a Greek chorus, but you’ve never seen one with divas having such sass and attitude along with vocal skills to growl and howl with the best of them.  And they shake their booties as well.

The basic premise is that Seymour (Phil Wong), a nebbish who works in Mr. Mushnik’s (Lawrence-Michael C. Arias) failing florist shop on Skid Row, inadvertently fosters a plant akin to a gigantic Venus fly trap.  He names the plant Audrey II, after Audrey (Sumi Yu), the other employee in the shop, whom he secretly loves.  The plant grows and grows and becomes such an attraction that the florist business booms, and Seymour becomes a celebrity.  The problem is that Audrey II’s growth was initially promoted by  the accidental dripping of Seymour’s blood onto the plant.  As a result, Audrey II develops a taste for human flesh, and as it grows and acquires language and singing abilities, so do its incessant and hilarious demands to “Feed me.”  So, how do you satisfy an insatiable carnivore?

The hapless Seymour, beset by one challenge after another, cuts a sympathetic figure whom you hope will get things right.  A wonderful talent as a comic, Wong even manages to get laughs with simple reaction looks in a 425-seat house.  But he sings surprisingly well also.  In a secondary plot, Orin (Nick Nakashima), a narcissistic dentist becomes Seymour’s nemesis, not just because he is Audrey’s boyfriend, but because he is sadistic and abuses her.  Nakashima plays Orin with flamboyant glee, seemingly channeling, in look and style, a misogynistic Andrew Dice Clay.  He forever inhales nitrous oxide and laughs like a giddy hyena while flailing around, fitting for the threat he represents.

Scenic Designer Christopher Fitzer’s revolving set highlights a strong staging effect.  Of course, the unique star is Audrey II, who starts as a table-top plant and grows large enough to capture two human beings in its vast, craving, red fur-lined mouth, with a lewd, dangling tongue.  Brandon Leland acts as the puppetry manipulator and the powerful pipes of Katrina Lauren McGraw as the savage and flesh lusting voice.  All of the production pieces are adeptly coordinated by Director Jeffrey Lo.

For those looking for some deeper meaning in the narrative, “Little Shop of Horrors” can be viewed as a slam on capitalism as cash register ring becomes an obsession, or perhaps a repudiation of the gentrification of traditional neighborhoods as the shop renovates to serve a customer base outside of its home turf.  Certainly, the abusive relationship of Orin toward Audrey could be viewed in light of toxic masculinity.  The viewer can make those inferences, but in all likelihood, the author was just looking to tell a funny story with a bit of spine-tingling horror to distinguish it.  It works.

“Little Shop of Horrors,” with book and lyrics by Howard Ashman and music by Alan Menken, is based on the film of the same name by Roger Corman, and plays at Lucie Stern Theatre, 1305 Middlefield Road, Palo Alto, CA through December 24, 2022.