Pastiche of War and Peace 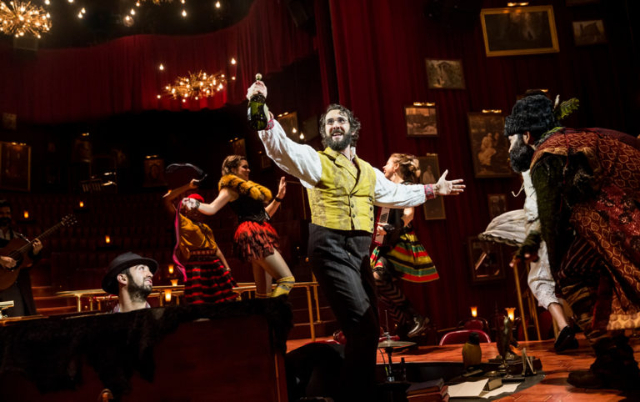 Josh Groban is bulked up as Pierre. 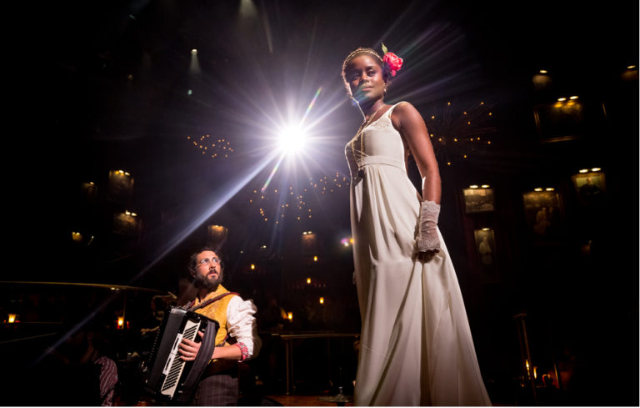 Denée Benton is dressed in virginal white as the maiden Countess Natasha. 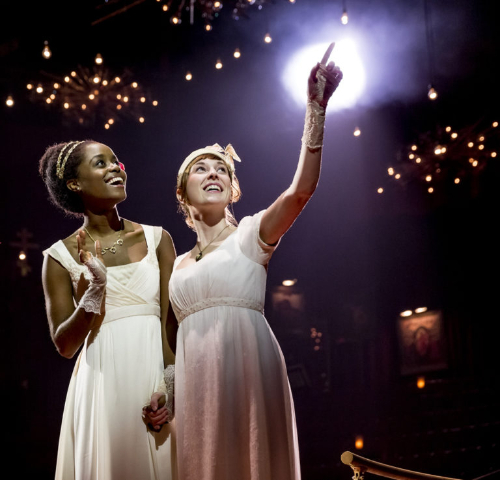 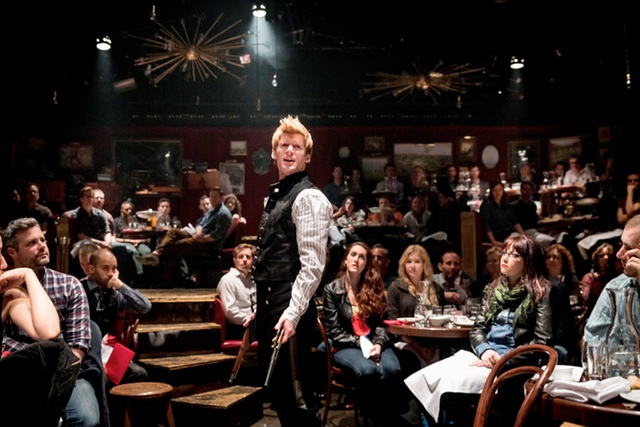 Based on an excerpt of some 70 pages from Count Leo Tolstoy’s epic War and Peace there were three prior, smaller iterations of  Natasha, Pierre & the Great Comet of 1812, music, lyrics, book and orchestrations by Dave Malloy, which recently opened on Broadway.

Initiated at the small but critically respected Ars Nova it evolved into a tented dinner theatre featuring Russian cuisine and copious shots of vodka. The performers danced on table tops and sat next to diners coyly interacting with them.

The complex and brilliant installation at Broadway’s Imperial Theatre is successful in recreating much of the charm and intimacy. The set by Mimi Lien has transformed the stage into a cabaret. Audience members again interact with the company and are also set behind the stage. This somewhat compensates for the rows of seats removed here and there in the theatre and replaced by platforms.

This results in members of the company performing vigorous, energetic and inventive ensemble pieces in, around, and through the audience. That has the galvanic impact of having us truly drawn into a spectacular and enthralling theatrical experience.

The evening begins with a clever Prologue which provides a setting and context of what is to follow. The actors from multiple vantage points fling small boxes with a snack of pierogi.

As in the opera the program offers a synopsis as well as flow charts and family tree for the characters. As the chorus informs us:

This is all in your program
You are at the opera
Gonna have to study up a little bit
If you wanna keep with the plot
Cuz it’s a complicated Russian novel
Everyone’s got nine different names
So look it up in your program
We’d appreciate it, thanks a lot

In making its way from low budget, Off Broadway to the mega financing of a full Broadway production there was the need for a marquee name. Josh Brogan is the musical’s star as the enigmatic, proto-existentialist, Pierre. They have given him a full beard and a somewhat padded costume to make him appear suitably middle aged and frumpy. But there is no disguising the magnificence of his voice which is by far the grandest in this production which features several superb singers.

The co-starring role of the virginal Countess Natasha Rostova, the fiancé of  Prince Andrei Nikolayevich Bolkonsky who is off fighting Napoleon, was initiated by Phillipa Soo. She moved to the role of Mrs. Hamilton in the smash Hamilton.

One may just imagine that fine Tony nominated actress in this production. In a bold, and not entirely successful instance of color blind casting, Natasha is now played by Denée Benton. She has a lovely and delicate voice that conveys her innocence and vulnerability.  But Benton lacks the maturity and depth to convey an iconic character who for many embodied the heart and soul of Mother Russia.

While this production surges and pulses during raucous ensemble pieces it slows to a whisper and whimper during solos and duets with Benton and her companion Sonya (Brittain Ashford). There is also regrettably more sizzle than beef in her scenes with the too handsome seducer, that utter cad Anatole (Lucas Steele).

With a war going on Russia is hardly at peace. While wearing a uniform why is Anatole attending balls and the opera, seducing maidens and neglecting his duty as an officer, patriot and gentleman?

It is in the telling of the love story that, under the director Rachel Chavkin, the musical devolves from grand, Imperial epic to rather mundane soap opera. How on earth could Natasha fall for such an obvious sleeze (also married) like the smarmy Anatole? Nothing about their interaction coveys the primal urge of that ill fated union.

His plan to escape with her to Poland, on money borrowed from Pierre, will result in her deflowering, abandonment and utter ruin. In the great scheme of high art, however, Tolstoy’s lightweight Natasha is no match for the higher stakes and more engagingly tragic seduction and ruin of Anna Karenina.

In this slice of the epic, indeed a pastiche at best, there isn’t much flavor of War as a dichotomy for Peace. We catch only glimpses of Andrei (Nicholas Belton) in a tattered uniform staggering about at the front. We hear excerpts from their letters but the character, nobility, courage and patriotism of Natasha’s fiancé is never palpable. It is essential to sense that and the monumentality of what she is abandoning to elope with Anatole.

While Groban has moments there is much about his Pierre that doesn’t make sense. The production has him stuck in the cabaret where he at times plays accordion or takes a turn at the piano. He never gets to roam around or run up and down the many platforms, stairs and exits. The staging of him is enervatingly static. Mostly he just stands and delivers.

His Pierre stays put while ruminating on his despised wife, the suitably bitchy Amber Gray (Hélène),  and complex circle of friends that includes divided loyalties to both Andrei and Anatole.

Hélène is the sister of  Anatole and assists in the plot to seduce Natasha.

It is arguable that not more than a fraction of the audience has read War and Peace. But Pierre is one of its primal and complex characters.

Born the bastard son of a nobleman he lived on a pittance and read avidly. He was the essence of European liberal intellectuals who embraced the reforms of the French Revolution. That culmination of the Philosophes, following  the chaos of the Directory and the resultant Reign of Terror, resulted in  the rise of Napoleon the conqueror. Instead of transforming Europe he set out to conquer it.

When, in a reversal of fortune, Pierre inherited his father’s title and estate he retained his liberal idealism. In defiance of Russian law he sought to educate his serfs with disastrous results. At the outbreak of war he visited the front to observe the battle. The carnage shocked and transformed him.

That is the backstory that informs Groban’s Pierre. Without it, however, his character, a classic anti-hero, is difficult to comprehend.

But there are those spectacular production numbers where making sense, or even friggin Count Tolstoy, is a moot point.

During one such sequence the company was on the rampage all over the titubating theatre. An actor collapsed flat on his back, inches from us, gasping for breath. Then, after a dramatic pause, he bolted up and charged off leaving me gulping for oxygen.

For the most part reviews have been enthusiastic but mixed. In the NY Times Charles Isherwood went out on a limb. “It is both the most innovative and the best new musical to open on Broadway since ‘Hamilton,’ and an inspiring sign that the commercial theater can continue to make room for the new. (Heresy alert: I prefer this show to that one.) Oh, and as for Mr. Groban, making his Broadway debut? He's not merely adequate; he's absolutely wonderful.”

For what it’s worth “The Great Comet” is pretty terrific, but having seen them both, sorry folks, it’s no “Hamilton.”