The Millionth Production of A Christmas Carol 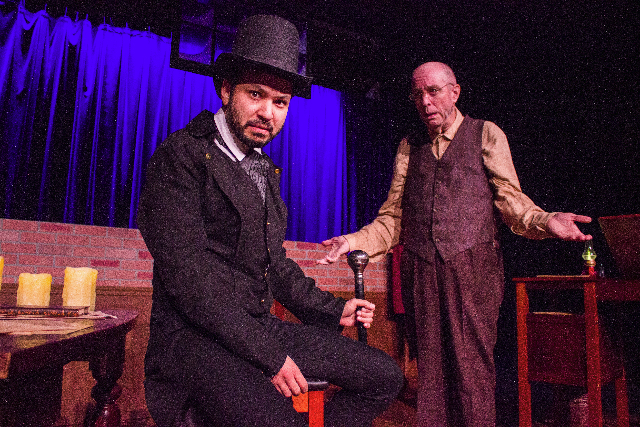 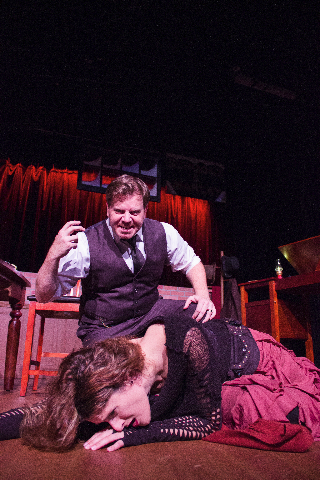 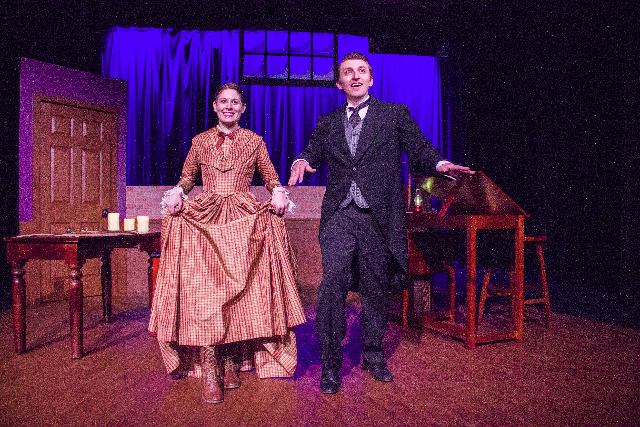 “We belong to the sound of the words, we’ve both fallen under,” from “We Belong (to the Light)” by Pat Benatar.

For those seeking an alternative to traditional holiday theater fare, Pear Theatre offers the world premiere of The Millionth Production of “A Christmas Carol.” A comic paean to all that is black box theater, the result offers much that will appeal to theater lovers, with a behind-the-scenes exposé about the people and processes involved in launching a production, without any real connection to Christmas. The play is peppered with raucous sketches of theater life and some unexpected dark twists and turns. It also reveals saggy sections that could be tightened up in future development.

Drawn from real-life experience, playwright James Kopp’s proposal to organize a production of A Christmas Carol was rejected, yet he noticed many other theater companies were offering it as seasonal product. Questioning what was behind the play’s abiding popularity led him along the path to write about a company that is preparing for its annual offering of the play. In doing so, he touches on the personalities of actors, creative designers, and managers; on the activities that occur during tech check-outs and rehearsals; and on the fragile financial vulnerabilities of many small theater companies. But amidst the grounded and realistic heart of the play, a nod to Dickens appears in the form of a ghost – a not too welcomed one.

Some of the characterizations are quite sharply drawn, the funniest being Jim-2. Why Jim-2? Because this playwright chose to do something that most fiction authors avoid like the plague – to give two characters the same first name. Ronald Feichtmeir acts the role with relish. A young man chosen to play Scrooge in A Christmas Carol, Jim-2 is obsessed with being the hottest Scrooge ever, unable to separate his own personna from his role. Yet his whiny affect is reminiscent of Billy Crystal playing an old man, rather than the stud that he perceives himself to be.

Michael Weiland plays Sam, who is a “face,” one whose acting is so weak that everyone knows that he’s on stage because of his good looks. In addition, Sam is dense. In one of the funniest sequences, Jim-2 asks Sam to rehearse a scene together. Jim-2 tells Sam that a good way to better understand your role is to practice conveying the required emotions but to use your own words. In each run through, Jim-2 uses emotive modern vernacular, but Sam parrots his text from the script. Jim-2 becomes increasingly irate and emphatic with each iteration while Sam responds that “Those are my words,” unable to grasp the distinction or the object of the exercise.

Played by Ariel Aronica, Bobbie is considered the most talented of the cast. But the more talented often get the lesser roles, and women in theater have fewer opportunities than men, something that she resents. Here, she can do no better than play Mrs. Cratchet, and in Bobbie’s sarcastic refrain about her unrewarding part she notes, “The bitch doesn’t even have a first name.”

Tech day can be long, grueling, boring, and full of snafus. Through the day we see frayed nerves with bickering and jealousies as well as the mutual support among these dedicated artists. We also see the arguments about artistic integrity versus revenue generation. In another sample of the humor in the play, the stage manager is checking out the lighting coverage by shining spotlights on five actors spread across the stage wingtip to wingtip. However, the sound system is playing the track from a previous production that they haven’t been able to erase – Pat Benatar’s “We Belong (to the Light).” Under each spot, the benumbed actors animate one-by-one to break into solo dance.

Playwright and director James Kopp is more than your average auteur. He also dominates the design creations in the production. In The Millionth Production…. he reveals a wealth of insight into theater – its attraction to performers, the sense of family, and the sacrifice. And in a provocative commentary, he contends that the truth is on the stage, and the lies are out there in the audience. Food for thought.

The Millionth Production of “A Christmas Carol by James Kopp is produced by Pear Theatre and plays on its stage at 1110 La Avenida, Mountain View, CA, through December 17, 2017.