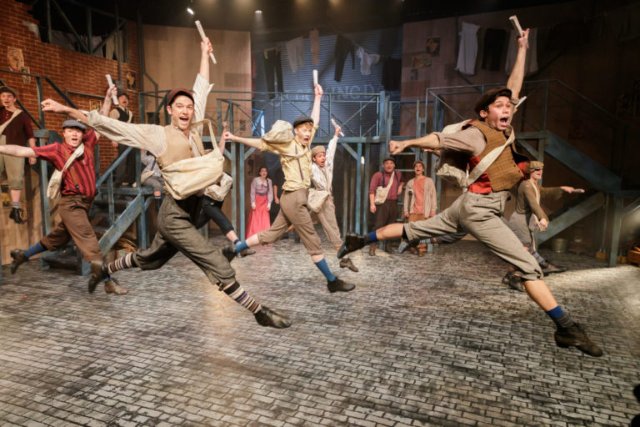 “Extra! Extra! Read all about it!” “Newsies Stop the World!” So was the headline cry of the Newsboys Strike of 1899, a significant event in the social history of the United States. The culmination of several work actions over 15 years, the mostly skid row boys who sold the newspapers on the streets organized in union fashion and finally forced Joseph Pulitzer’s New York World and William Randolph Hurst’s New York Journal to negotiate fairer payment conditions. Although a major event in the march toward unionization and decent conditions for workers, it is little known by our contemporary population that is taught mostly a glorious American history of wars and presidents.

As unlikely a topic for a Disney movie, the studio produced Newsies for a 1992 release which bombed with critics and at the box office. Equally unlikely, one of the most decorated composers in theater and film, Alan Menken, who had composed the music for the film, took another stab at the topic as the producer of the stage musical. He attracted a new and esteemed team – Harvey Fierstein writing the book and Jack Feldman writing the lyrics. The composer’s optimism showed justification as the resulting musical arrived on Broadway in 2012, garnering eight Tony nominations and over 1,000 performances. An entertaining production now plays at Hillbarn Theatre.

The central character is the charismatic Jack Kelly, played wonderfully with equal measures of flair and subtlety by Kamren Mahaney. Inspired by a real organizer of newspaper sellers called Kid Blink, he is looked up to and takes others under his wing. While most of the characters are drawn from stock gene pools, Kelly is one who is a rich hybrid – tough and tender, confident and unsure, leader and follower.

Kelly is conflicted in many ways. In the opening number, “Santa Fe” and throughout, he yearns to get away from the bleak streets of Manhattan to the open skies of the southwest. He even reveals artistic skills, painting landscapes of Santa Fe for a club. More importantly, he’s conflicted about the sacrifices that others have to make by giving up their meager incomes in order to strike, as well as about the palliatives offered to him personally by the cynical and selfish Pulitzer. On top of this, even his love interest causes clashes beyond the norms in relationships.

In the narrative, the powerless boys strive to compete against a merciless Pulitzer and his thugs. Shaun Leslie Thomas plays Pulitzer’s rage for dominance exquisitely, continually flushed almost to the point of popping blood vessels. But despite his dyspeptic behavior, Thomas displays both acting skill and a fine singing voice.

If this backdrop seems a grim tableau for an uplifting musical, it is boosted first by Menken’s fine score which conveys the fervor of the boys fighting for decent treatment. In addition, there are heavy-light moments, diversions into the club scene, and romance.

But what makes Newsies really jump is the dancing with the accompanying choruses like “Carrying the banner” about the independent but challenging life of selling papers on the streets, and “Seize the day” about striking to get their due. The energy in the dance is almost exhausting to the audience. In one number after another, fists pump, bodies twist and vault and cartwheel in a cavalcade of muscular movements. Feet stomp, punctuating the music symbolically, and sometimes literally with the thumping call “Strike! Strike! Strike!”

Kudos to choreographer Zoe Swenson-Graham. Both the formal dance and informal movement propel the emotion to bring the story to life. And credit the dancers. It’s remarkable that a community theater can attract so many young artists who will put in the time necessary to produce such high-quality performance in so many routines.

Paulino Deleal’s scenery, Matt Eisenmann’s lighting, and Pam Lampkin’s costumes help create a period feel, and needless to say, director Doug Greer pulls it all together. One major production glitch is the sound. Either the sound system is deficient or mics aren’t properly balanced. Some actors are difficult to hear and understand, and unfortunately, the biggest problem is with Jack Kelly, and this issue has been corroborated with three other audience members. Although the overall arc is clear without the details of some dialogue, much nuance is lost. Another minor weakness is that the acting in some of the smaller parts could use some improvement.

A surprising and disturbing issue is the absence of girls in the roles of news hawkers in both the film and the musical, a condition that just doesn’t square with reality. Knowing that females are already underrepresented throughout the entertainment industry, this omission smacks of sexism. The book that Hillbarn works with is one in which the characters are prescribed, so the company has no control over that. But what it does have control over is casting. It’s disappointing that they didn’t see clear to cast girls into some boy roles. With no disrespect to the fine actors who played these roles, Crutchie and Les would have been easy pickin’s for doing the right thing. Incidentally, by contrast, in Donna Summer – the Musical, now playing at the Golden Gate, not only are several male dancing roles performed by females, but so is the part of Giorgio Moroder, a very real man who is one of the most accomplished record producers and songwriters in modern time.

Newsies with book by Harvey Fierstein, music by Alan Menken, and lyrics by Jack Feldman is produced by Hillbarn Theatre and plays on its stage at 1285 East Hillsdale Blvd., Foster City, CA through December 22, 2019.