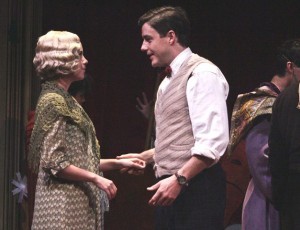 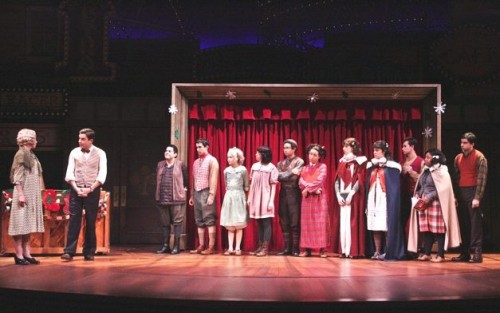 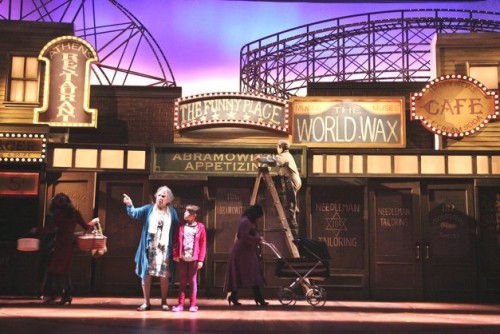 A warm and delightful Christmas show comes early for audiences of the Geffen Playhouse, one of LA’s prestigious regional theatres.  Journeyman playwright and 2000 Pulitzer Prize winner in Drama, Donald Margulies, the author of such notable plays as “Time Stands Still”, “Collected Stories”, “Brooklyn Boy”, and “Sight Unseen”, among others – all dramas, by the way – now sails into less turbulent waters with “Coney Island Christmas”, a delightful Christmas season show.   With the creative Bart De Lorenzo at the helm of this imaginative, warm and fuzzy-feeling Holiday show, it is sure to please audiences of all stripes and persuasions.

December is a month that places lots of demands on many individuals and families. It’s also a critical month for the retail business, and live theatre, as well.  Theatres all over the country will be mounting various versions of Dickens’ “A Christmas Carol”, Dr. Suess’s “Grinch” stories, and a myriad of Nativity-themed Christmas pageants and productions, not only in theatres, but also in schools across the country.  Which brings us back to “Coney Island Christmas” at the Geffen.  Playwright Margulies’ canon usually deals with Jewish-themed subject matter.  With this play, however, he broadens the story; appealing to a wider audience.

The story begins in Los Angeles in the present as grandmother Shirley Abramowitz  (wonderfully played by Angela Paton), begins to talk to her granddaughter Clara (Grace Kaufman), about her growing up years in Coney Island, Brooklyn.  The story then flashes backward in time to December 1935, where we meet young, eleven year-old Shirley (a confident Isabella Acres), and Shirley’s mother (Annabelle Gurwitch) and her father (Arye Gross).  The Abramowitz’s are European Jewish immigrants in a new country, where the ways and customs of America bump heads with the traditions and customs of the old world they left behind.  As proprietors of a small market, the store is a magnet for shoppers who miss their familiar and traditional favorite food.  The finicky Mrs. Kornbloom (Eileen T’Kaye), for example, never misses an opportunity to kvetch about the prices or the quality.

In secular 1935 America, Christmas is a holiday celebrated in its public schools with Nativity-themed Christmas pageants and religious-themed school plays.  Naturally, Shirley’s school has one as well.  The school’s drama teacher Mr. Hilton (a patient and understanding John Sloan) who has eyes for his young assistant Miss Glace (Lily Holleman), has made a decision to cast Shirley as Jesus Christ, in the school Christmas play.  Shirley is thrilled, however, her strict mother is mortified.  A young Jewish girl playing … Jesus?  Oy Vey…quickly followed by a definite, no way!

Papa, wisely and understandingly played by Gross, makes a secret pact with Shirley.  You can be in the school play, he tells her, as long as it doesn’t interfere with your home life and your chores… but don’t tell your mother.  Between the play rehearsals, and home life, Shirley manages to a point, until that is, when Mama finds out.  Unfortunately for Shirley, it’s on the play’s opening night and Mama forbids Shirley to perform.  Of course Papa intervenes, Shirley performs, and the rest, as they say, is history.

One of the most entertaining aspects of “Coney Island Christmas” are the scenes involving the group of adult actors portraying Shirley’s classmates as children.  The “children ensemble” is absolutely spot-on when it comes to their stage business and mannerisms.  It’s one of the best examples of adult actors portraying self-conscious youngsters performing in a school play that I’ve seen in a long, long, time – even to the nose picking and blank stares at the audience

The production directed by De Lorenzo, is a show that has great audience appeal, because it’s so well done. De Lorenzo and his creative team, led by Scenic Designer Takeshi Kata, provide the actors with a wonderful space, along with the look and feel of Coney Island in the 30s.  Lighting Designer Lap Chi Chu, paints the stage with a variety of lights and muted shadows, but always has enough lights onstage to compliment the period-perfect costume designs of Ann Closs-Farley.

In the program notes, references are made to the longtime and warm friendship enjoyed by the late founder and producing director of the Geffen Gilbert Cates, and Donald Margulies.  Cates, who was keen on presenting a holiday show at the Geffen, asked Margulies to write a Christmas show for the playhouse.  Margulies, jokingly replied that if he did write one, it will be a Jewish Christmas show, to which Cates replied “perfect”.  Sadly, Cates passed away before the production opened.  In a wonderful gesture, Margulies dedicated the play to his long time friend Cates.  And that dear reader is how “Coney Island Christmas” became the 2012 Geffen Playhouse Christmas show.  It’s an entertaining a most enjoyable evening in the theatre.  Don’t Miss It!  The production runs through December 30, 2012.