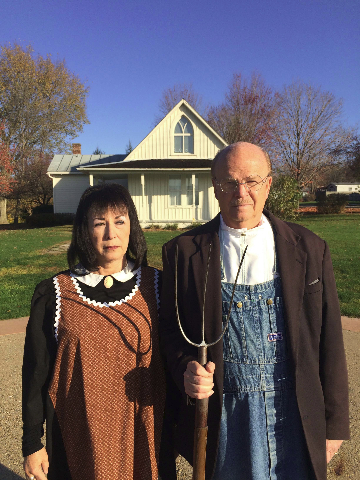 Visitors pose in front of the American Gothic house in Eldon, Iowa. The nearby American Gothic House Center lends aprons, overalls and pitchforks to the thousands who come each year to pose as the figures in Grant Wood’s iconic painting. 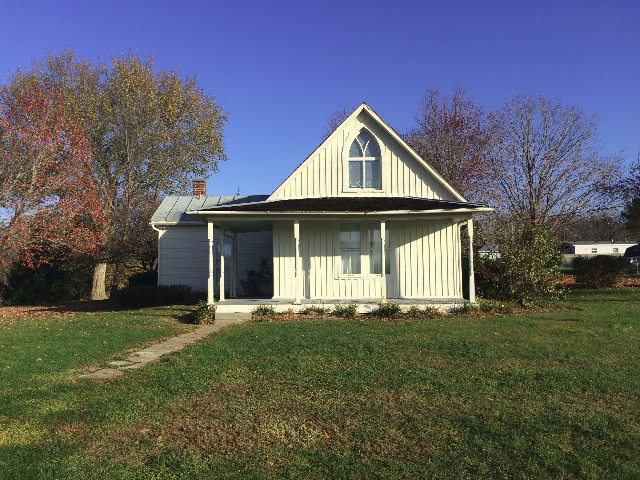 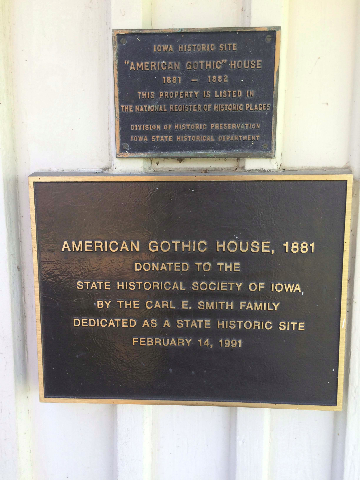 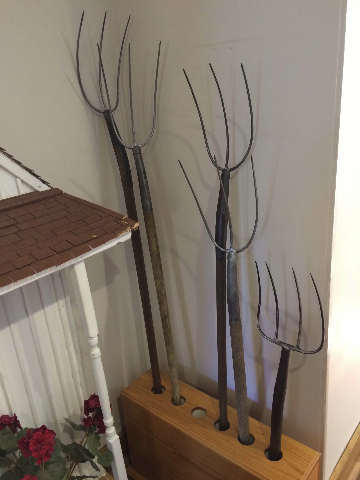 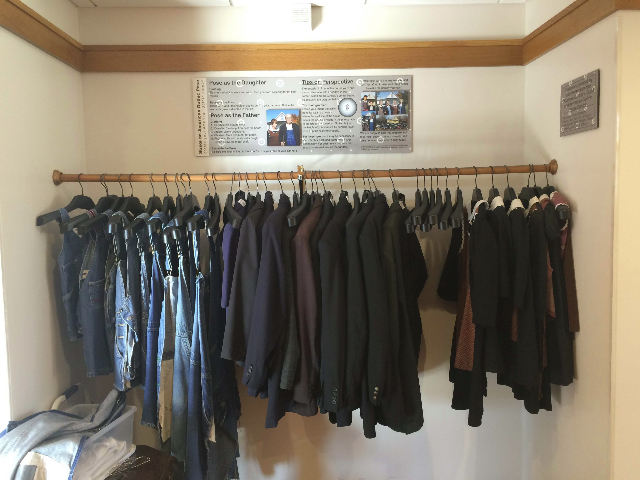 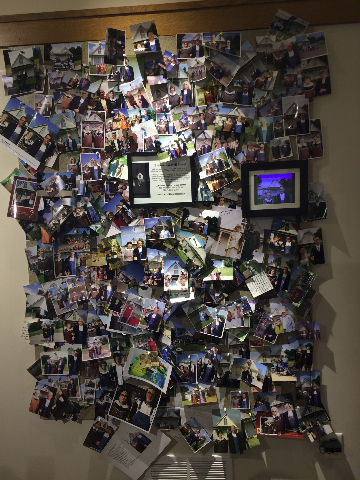 A wall of memories.

A dour farmer, wearing overalls and a jacket and clutching a pitchfork, poses rigidly next to apinch-faced, apron-clad woman who gazes sideways into the distance.Behind them is seen a modest white farmhouse whose second floor windowhas a pointed arch. Unlikely subjects for what is now one of the mostrecognized paintings in the world, but this is what Grant Wood’sAmerican Gothic has become since he painted it in 1930 for acompetition at the Art Institute of Chicago.  The painting is now inthe Institute’s permanent collection. The little farmhouse stillstands in Eldon, Iowa, where Wood saw it (only once) during a briefstay.  With its listing on the National Register of Historic Places in1974 and its donation in 1991 to the State Historical Society of Iowaby its last private owner, the house is secure in its originallocation. Now, visitors come from all over the world travel to spend alittle time in Eldon, to see the place that inspired Wood’smasterpiece, and to make themselves a little part of its story.GET IN THE SPIRIT AND PUT YOURSELF INTO THE PICTURE.

Steps from the farmhouse is the American Gothic House Center, which contains displaysabout Grant Wood and the creation of the painting as well as acollection of the painting’s parodies. The Center generously providesvarious sizes of the apron, overalls, suit jackets, antique glassesand hayforks to encourage visitors to pose in front of the house andcreate their own American Gothic portrait. To help personalize theportrait, visitors can substitute an implement of their trade (inplace of the hay fork held by the man) or a piece of their own jewelry(in place of the broach worn by the woman).American Gothic House Center Administrator Holly Berg said, “Mostvisitors are very excited at the opportunity to put themselves in thepicture. Sometimes it takes a little coaxing to get a reluctant spouseor teenager involved, but once they don the costume they get in thespirit. It does amaze me the number of visitors that come prepared fortheir photos. One group of sisters came dressed in their father'siconic overalls as a tribute to him. Another couple as Batman andRobin and wrote in the guest book that they were from Gothic City(instead of Gotham). The stories, both touching and goofy, areendless! And though the parody photos are a fun experience, it isalways interesting to see how many people notice something about thepainting they didn't realize until they put themselves in it--such asthe daughter's shoulder slightly behind the fathers, or her off to theside glance. It always ends up being a fun, but educational experienceat the same time.”AMERICAN GOTHIC HOUSE PARTICULARS.
The American Gothic House is located at 300 American Gothic St. in Eldon, Iowa. Tours of thedownstairs portion of the house are given the second Saturday of themonth, April-October from 10 a.m. – 4 p.m. Due to the historicfeatures of the house and grounds, accessibility for visitors withlimited mobility can be challenging. The adjacent American GothicHouse Center, “photo-op” area, and parking lot are all accessible. Formore information, call 641-652-3352 or emailTheAmericanGothicHouse@gmail.com. Admission to the Center is free.American Gothic by Thomas Hoving is an entertaining biography of thepainting.GRANT WOOD AROUND IOWA.

Grant Wood (February 13, 1891 – February 12,1942) is Iowa’s most famous artist. He was born on a farm near Anamosabut moved to Cedar Rapids when he was ten years old after the death ofhis father. From then on, Wood lived most of his life in Cedar Rapidsor Iowa City, dying of cancer the day before his 51st birthday. Inaddition to the American Gothic House in Eldon, Iowa sites connectedwith his life and works include the Grant Wood Gallery and VisitorCenter in Anamosa; the Grant Wood Studio and Home in Cedar Rapids;Grant Wood’s House in Iowa City; and Riverside Cemetery in Anamosa.Grant Wood’s Iowa by Wende Elliott and William Balthazar Rose is auseful guide for those laying out a tour.AND REMEMBER: “I had to go to France to appreciate Iowa.” Grant Wood.Susan Cohn is a member of the North American Travel JournalistsAssociation, Bay Area Travel Writers, and the International Food, Wine& Travel Writers Association. She may be reached atsusan@smdailyjournal.com. More of her stories may be found athttp://ifwtwa.org/author/susan-cohn.