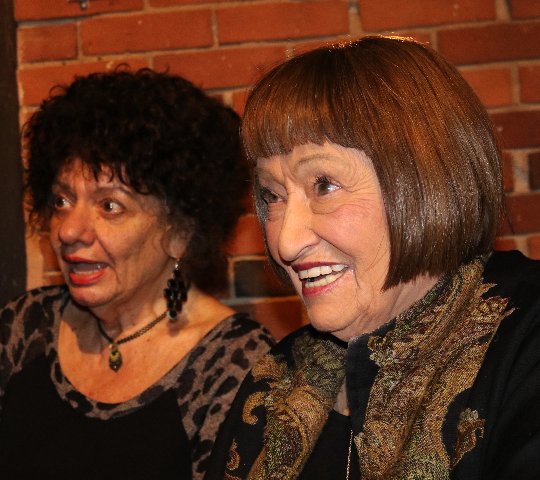 Jay Clayton and Shelia Jordan at the Firehouse. Giuliano photo. 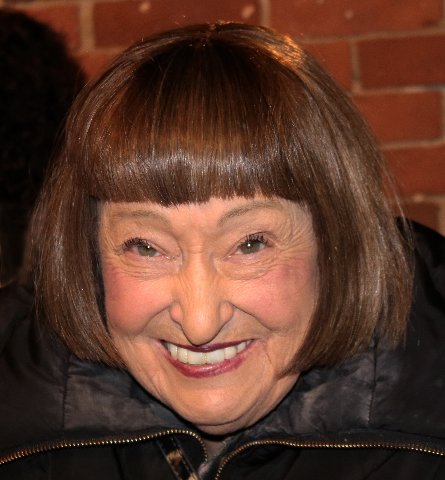 Shelia Jordan at 90 is taking scat to the next generation. 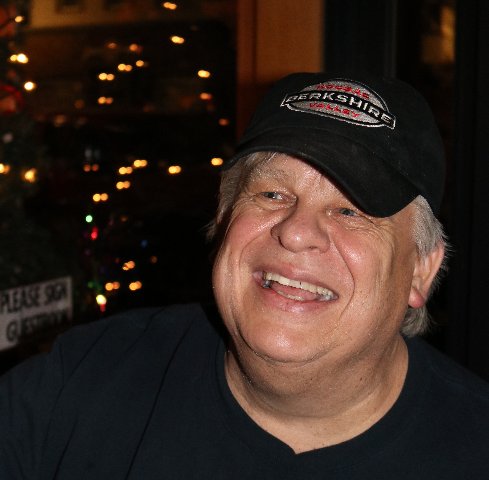 Bill Kolis is an Adams based arts activist. 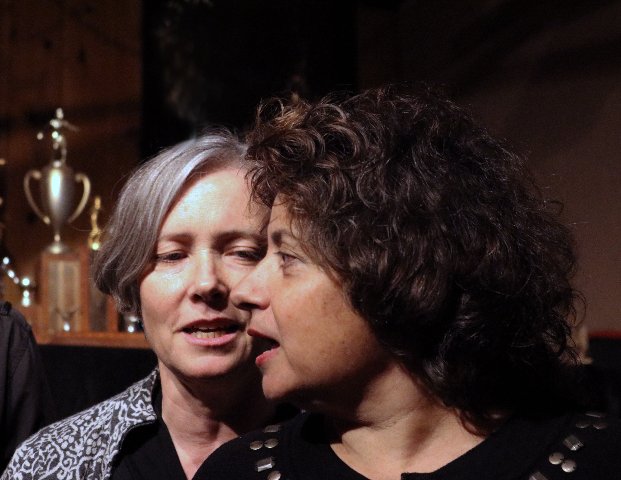 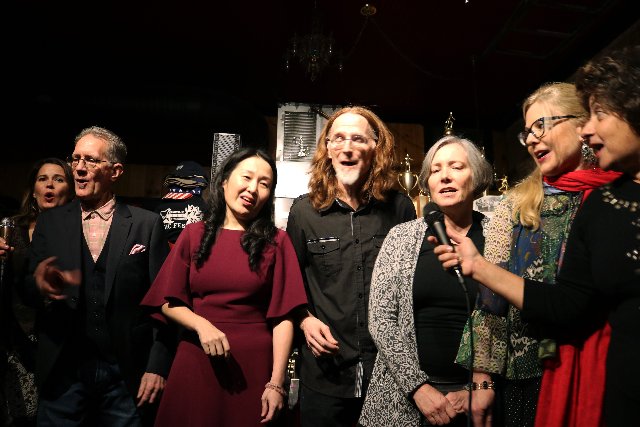 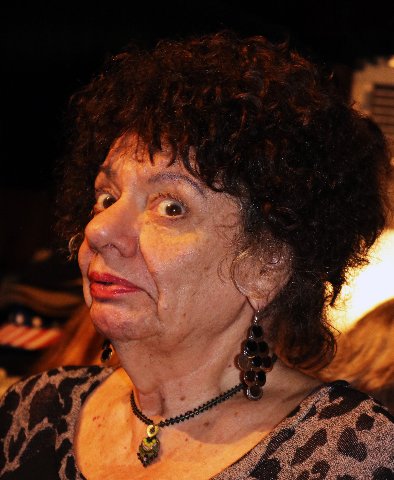 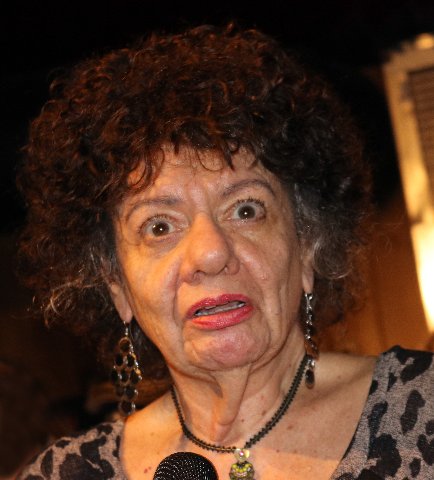 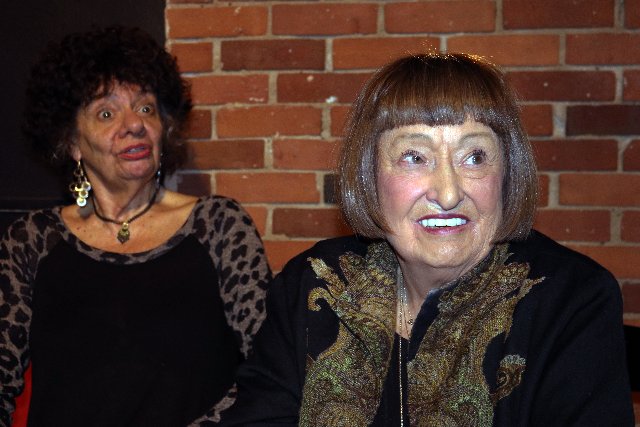 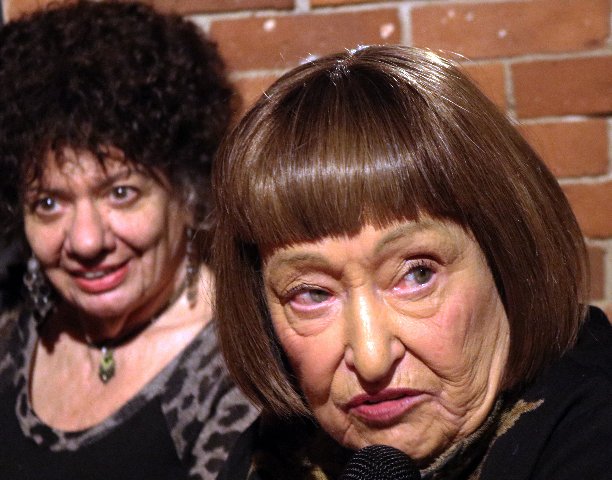 Listening to the performances. 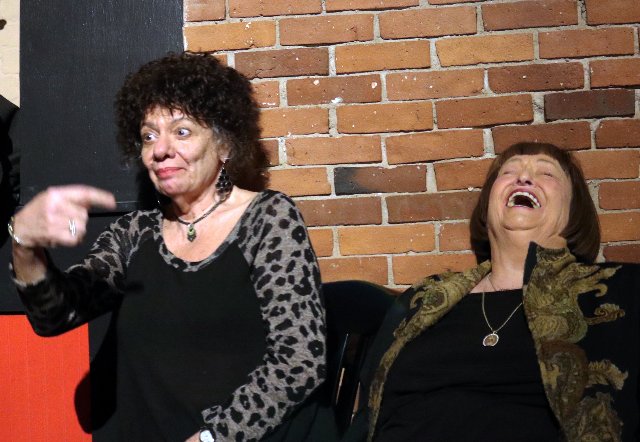 Cracking up to hearing an arrangement of her classic solo. 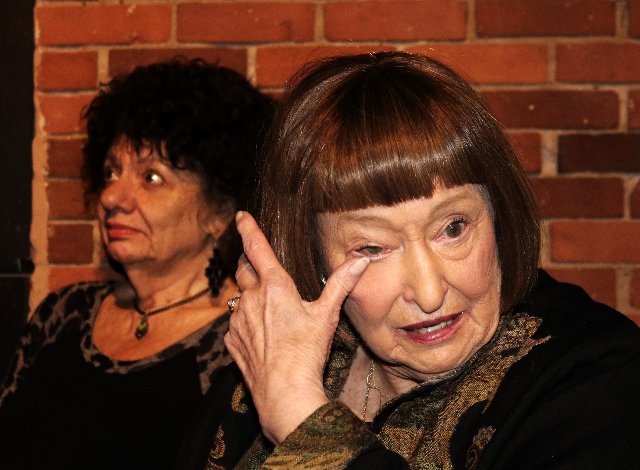 Overcome by the emotion of the occasion.

Last night there was a swinging jazz party at The Firehouse Café in Adams, Mass. It featured nine vocalists who had attended a workshop with the New York based singers Sheila Jordan and Jay Clayton.

The workshop was organized by world music aficionado, Nana Simopoulos, and her partner, former Paul Taylor Company dancer, Caryn Heilman. They run the unique, nearby Topia Inn where the singers stayed and The Topia Arts Center.

The by invitation, pot luck supper and performance was hosted by Firehouse owner and arts activist, Bill Kolis. As an attorney in Cleveland he regularly commutes to the Berkshires where he was born and raised.

In remarks to the packed house he spoke about giving back to the community and inspiring the emerging generation discovering the Berkshires. He is a part of the Adams Arts Council and a committee pledged to raise $130,000 for a life-size, bronze statue commemorating the Quaker born, Susan B. Anthony, (February 15, 1820 – March 13, 1906). The social and women’s rights activist spent her early years in Adams.

Looking about the room Kolis noted the collective talent of a growing and energized arts community. I needed to look no further than Bill Riley seated next to me. He and his wife Francine run Real Eyes Gallery just up the street. We talked about his work as a scenic painter for the current hit TV series on Amazon, The Amazing Mrs. Maisel. One of the episodes entailed a visit to an early 1960s art gallery. Bill painted the large, abstract, color field paintings which were a part of the narrative.

Indeed, nestled, no make that crammed into our ringside seats, we were slammed by the talent in the room. Jordan and Clayton were seated opposite to us.

Leaning over I told Jordan that we heard her recent interview and performance with bass player, Christian McBride, on Sirius radio. We were driving home from a week in Vermont and were enchanted by his humor, insight and respect for the legendary jazz singer. McBride has been named as curator of the Newport Jazz Festival. He took over from founder George Wein.

Last April we were unable to attend a similar event at The Firehouse. Hearing her with McBride we much regretted not catching her. A couple of days after we returned home the invitation arrived and we were there with bells on.

Now 90, during the performance the vocalists surprised Jordan by performing one of her legendary scat solos. Shelia was thrilled. “That’s my song” she exclaimed. It was a part of a birthday greeting. Then the entire audience sang a chorus of “Happy Birthday” as she choked up. She told us that being celebrated so warmly, and performing with the nine vocalists, was one of the great moments in her life.

Actually, the birthday celebration was a bit of a fib. She was born Shelia Jeanette Dawson, in Detroit on November 18, 1928.

Her mother was 17 at the time so she grew up with her grandparents in Pennsylvania. Later she returned to Detroit in 1940 where she first started to listen to the great jazz artists of the era. She got to know Charlie “Bird” Parker who dubbed her “the singer with the million dollar ears.”

She was a part of the trio, Skeeter, Mitch and Jean, performing around Detroit. They set lyrics to those complex Bird bebop solos. She evolved as a master of vocalese and the improvised style of scat singing. That’s what was taught in the workshop. It was great fun to hear them cut their scat chops in individual as well as ensemble performances. There was a range of material from ballads, Samba, to up-tempo bop.

It was indeed challenging for a young white girl to make a living as a jazz singer. In New York by 1952, Jordan studied jazz theory with the blind pianist, Lennie Tristano, and bass player Charles Mingus.

She told McBride that bass was her preferred instrument. They played a few duets in which she wildly improvised lyrics and riffs. She became know for performing and recording duets and there is an extensive discography. They talked about an honorary degree from U. Mass. Amherst.

As a longtime faculty member at the UMass Jazz in July Summer Music Programs, in 2017 she was  awarded an honorary doctor of fine arts degree during Undergraduate Commencement at the University of Massachusetts, Amherst. There has been a renowned jazz faculty including bop drummer, Max Roach, and free jazz, tenor player, Archie Shepp.

It is among many awards for her performance and teaching. In 2012, she was given the greatest honor in her field as a National Endowment for the Arts Jazz Master.

Surprised that I seemed to know a lot about her, based on the McBride interview, she said “There’s a lot about me you don’t know.” She told me that she is a direct descendant of a legendary Seneca leader.

From 1952 to 1962 she was married to pianist Duke Jordan who worked with Bird. She took a break to raise their daughter. Providing stability with a day gig she got back to jazz full time when she was 58. It’s been quite a run since then.

She lives on 18th street in the Chelsea section of Manhattan. Clayton is her roommate, fellow educator, and collaborator. She was born Judith Colantone, in 1941, in Youngstown, Ohio. They became friends and fellow travelers of the avant-garde fringe of out there, free jazz. Neither singer has ever been a mainstream lounge lizard. They are completely dedicated to creating experimental music.

Looking about the packed and enthusiastic room Sheila exclaimed “I should do a gig here.” She is already booked to return for a workshop next year. Kolis announced plans to promote a multi-venue, jazz festival for the summer of 2020.

I asked if she still does gigs in New York. “Oh yes,” she said. “I’m a regular at Birdland and Mezzrow’s.” Oh yeah, I said, “As in Mezz Mezzrow, the hipster author of the jazz memoir Really The Blues (dig it if you can).” To which I added “You should write a book.”

“That’s already happened” she reminded me.  Her biography, Jazz Child: A Portrait of Sheila Jordan, was written by vocalist and educator Ellen Johnson and published in 2014.  It was a collaboration that took seven years.

It was time to fold the tent. We exchanged cards and promised to stay in touch. Later baby, us cats in Adams dig you the most. Y’all be cool