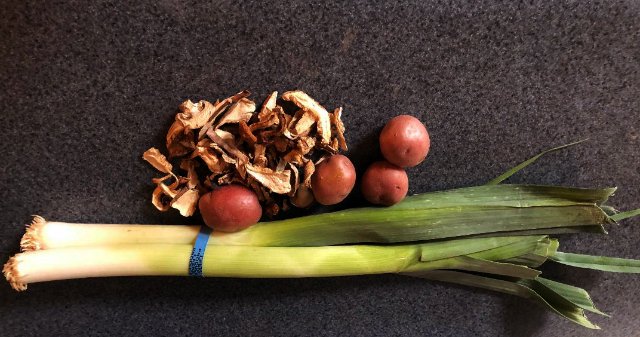 Recently, through Amazon, we purchased dried mushrooms as family gifts as well as a pound of mixed, sliced, stir-fry fungi.

It’s been fun to experiment.

During these hard times, a bright spot of the day is something new and different for dinner.

Getting started, we put a generous amount in a colander and washed them.

Then they soaked in a bowl for several hours. Next time we will boil them to further soften them.

There were a couple of stir fry meals, one with shrimp, the other with bok choy.

Then a wonderful soup which proved to be copious. The first version had large pieces. The next night Astrid put the mix from the fridge into a blender. The flavor and texture were marvelous.

There was still some left but not enough for a meal.

On sale, I found half  a fresh turkey breast. It was about five pounds.

Yeah, I know, turkey so soon after Thanksgiving.

I love turkey, particularly when it is fresh. And, at $1.25 a pound the price was right.

It was just fabulous, flavorful and juicy.

With lots of left-over potato which was roasted to fill the pan.

Not wanting to have turkey two nights in a row we considered leftovers.

Then what to do?

Why not potato and mushroom soup?

Astrid was headed out for shopping so I asked her to look for leeks.

We had never gone down this road before and just had a hunch.

It was her turn to cook so I just looked on and kibbitzed.

She got out the blender which had been used to puree the mushrooms.

Some of the potatoes, a mix of small and medium, red and russet, were partly pealed.

Most were cut into smallish pieces and filled the blender about two thirds.

To this was added the last of the mushroom puree. As well as the half carton of bone broth chicken left from the mushroom soup.
That proved to be fairly thick. She used a base to make more mushroom broth.

Separately, she sliced and boiled one large leek. She spooned the soft pieces into the blender.

The content of the blender was added to the pot with its leek water. To that was added a bit more broth to get the right, thinner consistency.

Tasting the heated mix, which she cooked for about twenty minutes, proved that we were on the right track. It needed something so she generously added fresh pepper.

At the table we added half and half to taste.

The resultant soup was fabulous and quite filling for a satisfying meal.

It will join our go-to evening meals.

Some after thoughts. Next time, Astrid suggests sautéing more leeks. And we should have some garnish like fresh parsley, cilantro or scallions.

There is enough for another evening of soup.

Tonight, however, it will be more turkey. She likes to heat slices in its gravy. Then, of course, there will be turkey soup.

With Christmas just around the corner we will have to plan a festive meal for just the two of us.

Perhaps something themed on sugarplum fairies.

It’s time to break out the eggnog and fruitcake. And to all a good night.