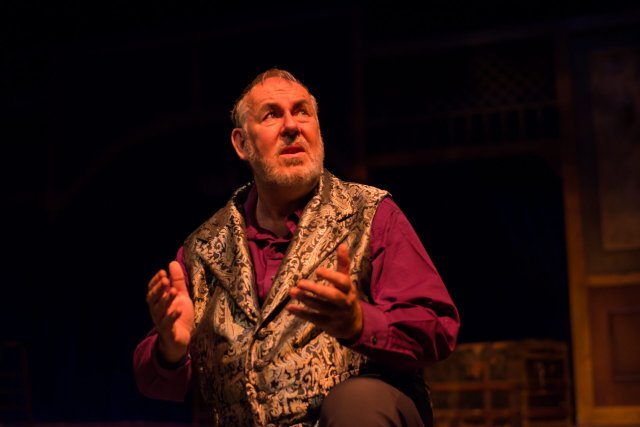 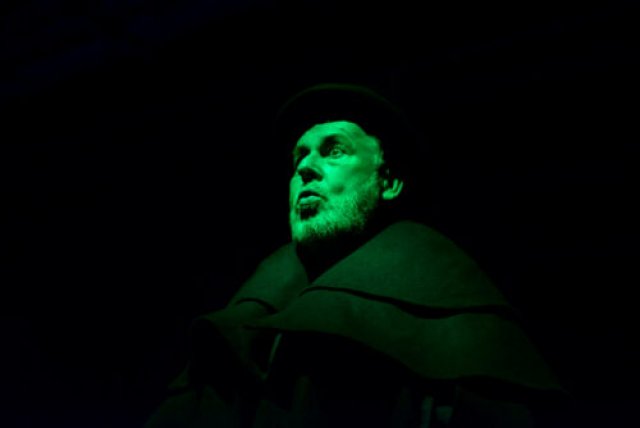 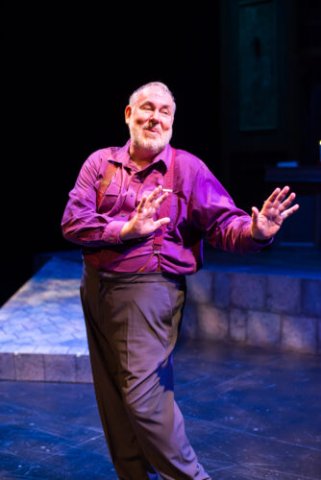 It seems that no matter how many times we experience A Christmas Carol, we do not grow tired of this evergreen tale. That is not surprising. After all, Charles Dickens’ beloved tale is a classic. And with classics, you are likely to uncover new themes, messages, meanings, and motifs each time you view or read them.

Of course, uncovering new nuggets becomes even easier when a classic receives as many adaptations as Dickens’ 1843 novella has. Indeed, countless authors have adapted Dickens’ source material into plays, movies, radio versions, and more.

This production of the engaging one-performer, multiple-character adaptation runs through Dec. 19 in the intimate Carnival Studio Theater. It is located inside the Adrienne Arsht Center for the Performing Arts of Miami-Dade County.

Long-time British actor Colin McPhillamy, who has performed everywhere from South Florida to Bejing, to London’s West End and Broadway, convincingly and energetically portrays 18 characters, including a narrator.

Jacob Marley’s Christmas Carol is proof that theater companies can take a “less is more” approach and still captivate audiences.

Throughout City Theatre’s production, the immensely talented McPhillamy changes costumes just once. And he uses less than a handful of props to bring the characters and story to vivid life. Scenic designer Norma Castillo O’Hep has created a basic, elegant set on which McPhillamy performs.

Rest assured, McPhillamy hardly becomes a “talking head” who speaks in a monotone while remaining in one place. To the contrary, quite often, director Margaret M. Ledford moves the performer around the stage to help create variety. In addition, the actor deftly modulates his voice, changes posture, stance, gestures, and facial expressions to sound and look different as each character.  To his credit, McPhillamy switches seamlessly from one character to another.

Audiences play an integral role in any live show. However, they play an even larger part in this stripped-down production. Specifically, they need to use their imagination. This requires that audience members pay close attention. If one or more audience members decides to get up mid-action for whatever reason– which happened during the reviewed performance– the spell under which McPhillamy has us is broken. So, be considerate of your fellow audience members, the performer, and other theater artists. Wait until intermission or after the show for breaks.

This production runs less than two hours. That includes an intermission.

The familiar characters from the source material are present. In addition, new characters populate this adaptation.

Instead of telling the tale from cold-hearted miser Ebenzer Scrooge’s perspective, Mula tells the story from that of Scrooge’s long-time business partner, Jacob Marley.

As anyone who has read Dickens’ novella surely knows, Marley has died before the action begins.

Because he failed humanity in life, Marley is doomed in death to wander the world while heavy chains weigh him down. In Dickens original tale, Marley’s ghost informs Scrooge of this. Also, the spirit tells Scrooge about visitors he will receive so that he can avoid a fate similar to that of Marley.

In Mula’s adaptation, Marley takes on a more active role. Specifically, he arranges for the three ghosts to visit Scrooge and transform him from an icy miser to a kind, good-hearted man. And, by the end, Marley discovers how fulfilling it feels to help someone.

The need for charity, benevolence, and the possibility of change and redemption were always A Christmas Carol’s major themes. However, Mula’s stage adaptation, through Marley’s active participation in Scrooge’s redemption, particularly emphasizes the importance of helping others.

The award-winning Mula, who played Scrooge for 400 performances at Chicago’s Goodman Theatre, has created a faithful adaptation of Dickens’ novella. In addition to retaining the same characters, Mula has kept the basic plot intact. In fact, he has departed from the novella by adding to it, rather than subtracting from it. For example, Mula has some fun with the text in the beginning. “In the words of the old song, (Marley) was not only merely dead, he was really most sincerely dead,” the playwright wrote, borrowing lyrics from a song in The Wizard of Oz. And he makes sure to credit Dickens by, without naming him, referring to a talented storyteller.

The additional characters include a small sprite named Bogle. It accompanies Marley on his quest to redeem Scrooge. McPhillamy impishly plays the Bogle, while spreading out his arms and flapping his fingers to indicate the creature flying.

Also, McPhillamy, who possesses a wide vocal range, conveys Scrooge’s bitterness as deftly as he injects giddiness into a transformed Scrooge. Overall, the actor offers a masterful performance. It is blessed with fluidity, spontaneity, and versatility.

In addition to the performer, credit veteran lighting designer Eric Nelson. He created a stark contrast between bright and dark moments, realistic and non-realistic ones. For instance, when Marley’s ghost is about to visit Scrooge, Nelson bathes the character in a greenish glow that emphasizes eeriness. Also, rising stage fog lends the proceedings a creepiness during moments such as the graveyard scene. During upbeat scenes, the lighting is bright and realistic.

For much of the play, McPhillamy wears a purplish dress shirt underneath a golden-colored vest with patterns and dark-colored pants. It is an appealing period outfit. The only other costume the performer wears is an all-black outfit, certainly appropriate for Scrooge’s dark personality. Veteran costume designer Ellis Tillman designed the costumes.

Thanks to sound designer Matt Corey’s excellent work creating effects, we hear seemingly real sounds. They match the various moods in the play.

With Jacob Marley’s Christmas Carol, Mula has created a warm and inviting, thoroughly captivating tale. It celebrates the power of the human imagination, and humanity’s innate capacity for change regardless of a person’s station in life or age.

While Scrooge undergoes his own transformation from miserable miser to big-hearted, beneficent being, Marley transforms as well. At first, he is  a desperate, tortured soul. By the play’s end, he is a redeemed individual who has found happiness by helping another person.

Certainly, it is hard not to exult after watching A Christmas Carol. And it is equally hard, if not more difficult, to refrain from exulting after experiencing Jacob Marley’s Christmas Carol.

No doubt, Dickens would be proud.

City Theatre’s production of Jacob Marley’s Christmas Carol continues through Dec. 19 at the Adrienne Arsht Center for the Performing Arts of Miami-Dade County, 1300 Biscayne Blvd. in downtown Miami. Ticket prices are $50 and $55. For tickets, and to view a trailer, go to https://www.arshtcenter.org/Tickets/Calendar/2021-2022-Season/Theater-Up-Close/Christmas-Carol/. To call the Arsht Center, dial (305) 949-6722. Meanwhile, City Theatre’s website is at https://www.citytheatre.com. Its phone number is (305) 755-9401.