Death of a Salesman on Broadway 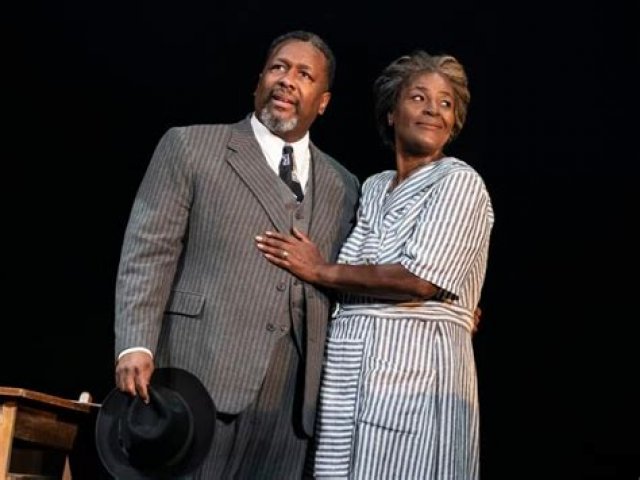 Death of a Salesman is getting an interesting, if not always successful, revival at the Hudson Theater on W. 44th Street. The revival produced by the Young Vic Theatre originated in London last spring to acclaim.

The Arthur Miller play is considered among the best American plays. He called it an “American Tragedy,” and while it doesn’t meet the definition of the classic Greek tragedy, it does land the same emotional wallop.

The story of Willy Loman, his wife and his two sons is an American tragedy.  Willy Loman has been used by the capitalistic system and discarded when he is no longer useful. A traveling salesman, he is now old and tired, and the buyers who knew him are retired or dead. He returns home after a disastrous day to his wife Linda and his two adult sons, who are spending the night. In the next 24 hours, he relives earlier moments of his life, tries to go on and fails.

Is he having a nervous breakdown?  Is he mentally ill? Does he exhibit early signs of dementia? Or is he just angry and depressed? Audiences – and students – will have different answers, but I think the first is the most correct.  His two sons – Biff and Happy – are reflections of him and their upbringing. Biff at least questions the assumption that the definition of success is a white-collar job, while Happy is gung-ho to achieve it.

The play moves between 1949 – when Willy is 60 or 62 (Miller says both) – and Willy’s recollections of happier memories 17 years before.

Miller was known for his criticism of how capitalism uses people, but here he is also questioning the assumptions about what the American Dream is and how it can be achieved.

Director Miranda Cromwell adds race into the mixture, detracting from the other themes that Miller wanted to focus on. With the Loman family African American and the other characters white, including their neighbor Charley, his son Bernard, and Willy’s boss, Howard, it skews the narrative.

A short scene between Howard and Willy has Howard dropping a cigarette lighter and Willy picking it up and handing it to him. Cromwell has directed this with Howard dropping the lighter and then staring at Willy, who picks it up; when Willy attempts to hand it to Howard, Howard insists that Willy light his cigarette. The audience gasped because this moment recalled too many incidents of African American men being treated as servants.

The problem isn’t that it was dramatic; the question was it necessary?

I have seen numerous productions of this classic, including a 2009 production at the Yale Repertory Theatre that featured an all-African-American cast. In that production, the focus remained on Miller’s central points.

Sharon D. Clarke is fine as Linda. She knows too well Willie’s negative qualities; she loves him, but as she tells her sons, “a terrible thing is happening to him.” She is the only realist in the family.

Wendell Pierce completely conveys Willy’s exhaustion (mental and physical) and his desperate attempts to keep his dignity and confidence. As he looks back at his life, he finally begins to see the realities, not the rose-colored version he wanted to remember.

Andre de Shields is the ghostlike figure of Willy’s much older brother, Uncle Ben. Unfortunately, the interpretation is off-balance with the rest of the production.

As the two sons, it wasn’t their performances that were lacking but they seemed miscast. Biff is the rugged outdoorsman who has worked as a ranch hand for years. Hap is the salesman with the long list of “conquests.” Yet from their appearance, it did not seem as though Khris Davis as Biff had ever worked outdoors doing manual labor, while it looked as though Hap (McKinley Belcher) had spent a lot of time at the gym. It is a little thing but a distracting one.

Cromwell and scenic designer Anna Fleischle have created a set that veers considerably from the usual one that Miller described in detail. Does it work? It is less realistic, making the jump between 1949 and 17 years earlier more difficult. It may be intentional to emphasize the separation among the family. What was the boys’ bedroom when they were young is not just upstairs but off to the left, quite separate from the rest of the house. It is also so upstage that it loses some of its importance.

For those who either have never seen a production or have not seen one in a long while, this is worth attending. It just won’t make my list of the best productions of the play, nor the best Willy Loman I’ve seen. That honor goes to Brian Dennehy.