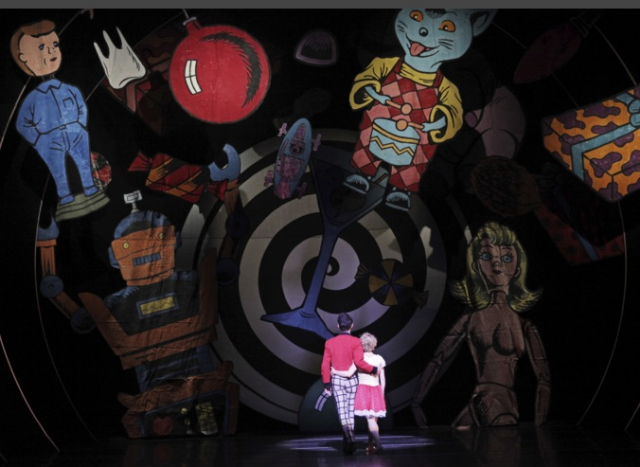 Mark Morris' The Hard Nut at BAM. A perfect evening. 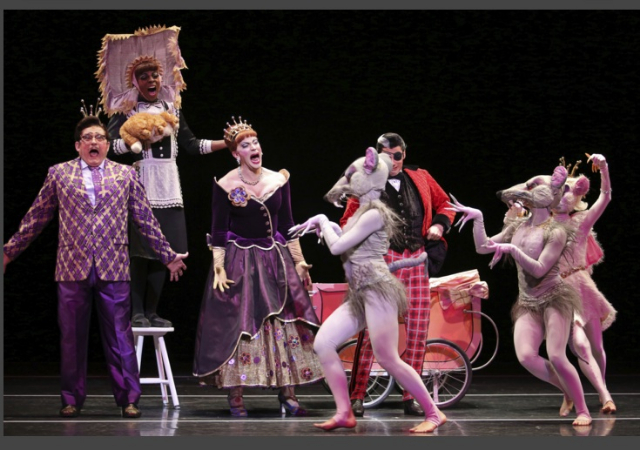 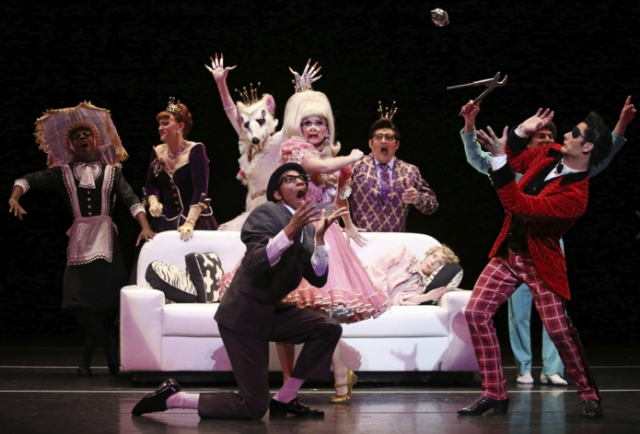 Where is the nut? 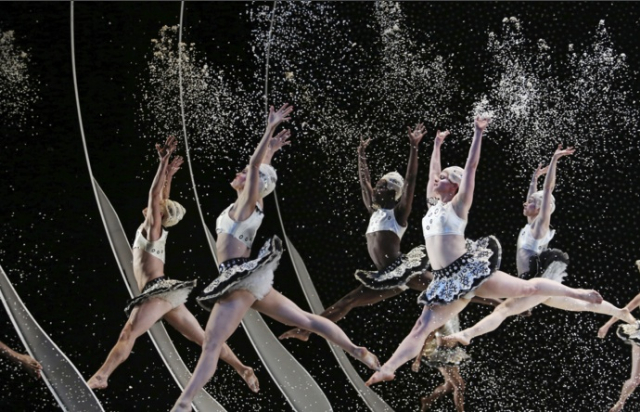 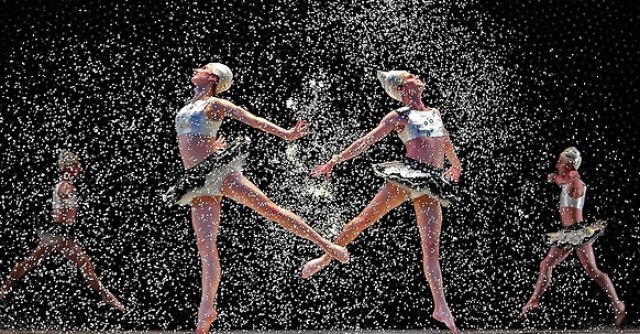 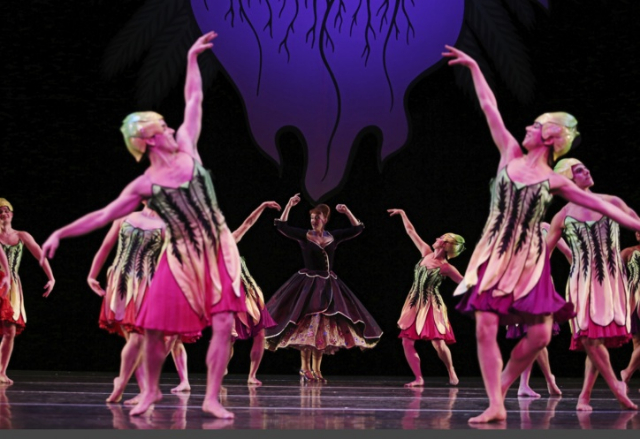 Waltz of the Flowers supervised by Jon Heginbotham 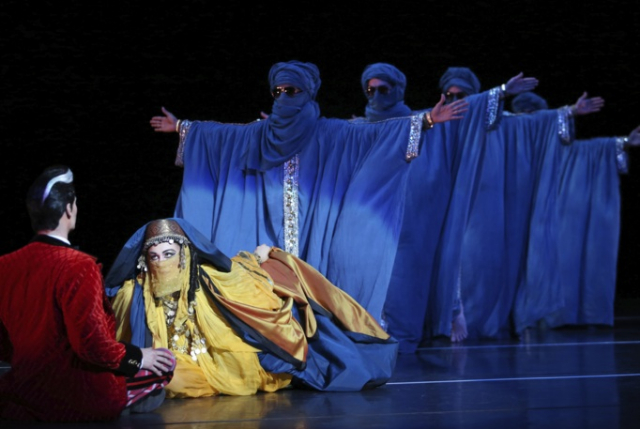 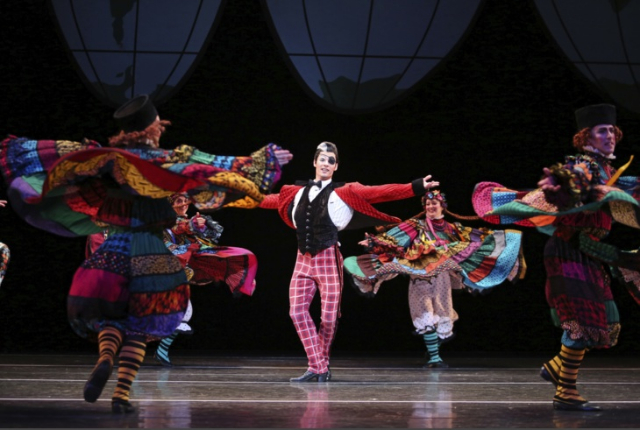 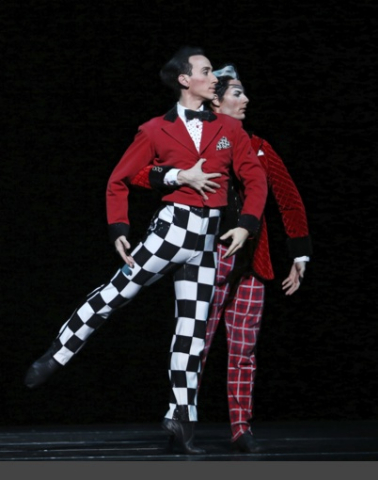 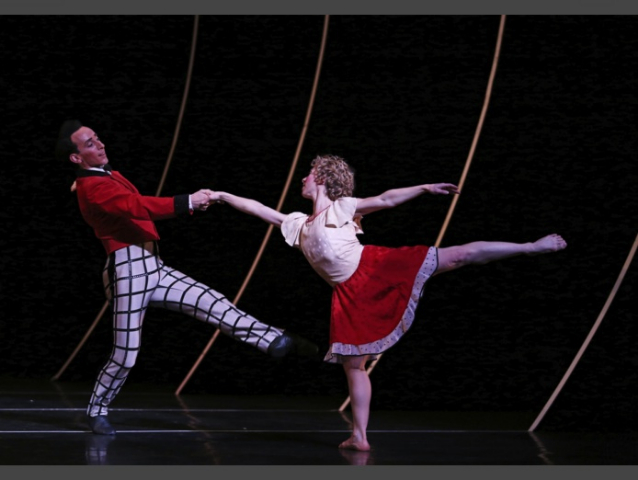 Chestnuts roasting by the TV fire in an insert entertainment room set.   Two children are glued to the TV. Adults like the delightful Brandon Randolph switch the scene to Channel 11’s burning log.  Randolph moves in a cross between robot and comic and is an enchanting housekeeper/nurse,  bourrée-ing when she tries to take command.

The Yule log TV program, which runs between two and four hours in duration, is a film loop of a yule log burning in a fireplace, with a traditional soundtrack of classics with Christmas music playing in the background. This of course would interfere with Tchaikovsky’s charming score as performed by the MMDG Ensemble under Colin Fowler.

Mark Morris’ brilliant The Hard Nut is an alternate take on traditional Nutcracker, and truer to the spirit of the underlying story. We go to the parents' Christmas party, where fun is made of classic dances and then on to dream.   We are inside a snow globe, that transparent sphere, traditionally made of glass, and enclosing a miniaturized scene.  Here the scene fills the grand stage at the Howard Gilman Opera House.

The Waltz of the Snowflakes is blown up and stage hands spend intermission ‘shoveling’ snow off the stage. A map of the world with blinking lights suggests the worldwide journey we will take.  From Spain where the lead female dancer Michelle Yard butts with her bullhorns, to the burka-ed Middle East. In China, feet are bound to dance and Russian dancers are dressed like dolls whose nesting we eagerly await.  In France dances with country-appropriate costumes dazzle.

Morris is the pater familias in a green Christmas jacket, his face dominated by the outlines of Groucho Marx eye glasses. His beautiful, very tall wife who looms over him is the delicious John Heginbotham, who enters plumping up non-existent boobs and leaves his hand on one section of the snow globe, lingering for a moment at the conclusion of the Dance of the Flowers.  In Flowers his flapping wings and light steps make the flowers grow.

Martin Paklediaz’ costumes are crucial to the pleasure of the production.   Flowers are created from multi-colored leaves draped with gentle lines across the dancers’s bodies. You would never know that Lauren Grant was an adult with her short blond curly hair and a red skirt, flaring like any young girl’s. Grant has danced this role for almost twenty years and is grateful for her stature, small for a dancer

Grant speaks about being a snowflake and a flower. Snowflakes, she remarks, is an ineffably beautiful dance, but extremely difficult to perform. We become mesmerized by the gorgeous falling flakes accompanied also by the Mark Morris singers tucked into a box above the stage.

For some dancing, Grant brings out her toe shoes to dance en pointe. She does not dance often en pointe, but treats her slippers as buddies. She jumps and bourrées on them when she is scared, a clever device to have the feet symbolize fear.  She enjoys Morris’ play with the shoes, which are scarey in and of themselves. Grant argues that Morris’ production is the truest to the E.T.A. Hoffman story which is both beautiful and scarey, full of love and a sense of community

The audience is all aglow, waiting to see if the dancers will fly as reindeers do. Mark Morris dancers convey ‘Merry Christmas to you' and the audience reciprocates.