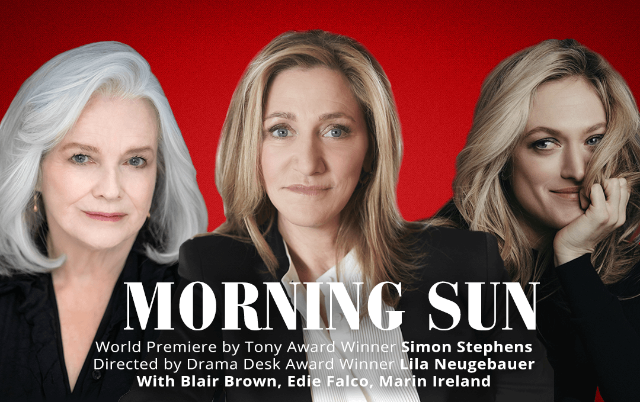 For the discerning theatergoers who live and die theater, and perhaps still remember the dazzling effectiveness of Stephen’s Tony-winning play, The Curious Incident of the Dog in the Night (2015), it is a "must see play. I kid you not.

From the play’s luminous actors, Edie Falco, Blair Brown, and Marin Ireland – referred to in the script as numbers 1, 2, and 3 – the crystalline direction of Lila Neugebauer, along with the brilliance of the set (dots), costume (Kaye Voyce), and lighting (Lap Chi Chi) designers, Morning Sun is brought to perfection by a team of top-of-the-line A-Listers.

It is simply thrilling to watch, see, and feel such a well-seasoned team coalescing as they slowly invade our innermost being.

The title of the play which stems from the playwright’s love of Edward Hopper’s famed painting Morning Sun (1952) which features an unknown woman sitting on a bed in a simply furnished room gazing out the window. Is she in a hotel or at home? Is she lost in her thoughts or is she just plain lonely?

Not surprisingly, the tone and temperature of the play, from beginning to end, from the script to the set, lighting, sound, and the storytelling of all three characters hews closely to the so-called ordinary woman, a kind of Everywoman, as depicted in Hopper’s painting.

As the play opens, we are introduced to the cast, albeit in the dark.

Here we hear Voice # 1, Edie Falco (Charlotte McBride, also referred to in the play as Charley), asking “Am I Safe?”

It appears, as we eventfully find out that we are at a hospital, and somebody is dying.

During the next intermission-less hour and some 40 minutes, starting in the year 1947 when Claudette moves to New York from Nyack, we are taken on a seven-decade journey. The shifting of time and place is frequently presented out of chronological order by all three actors, while only two of actors, Blair Brown and Marin Ireland, change their voice most effectively to portray other characters, both male and female.

The comings and goings of all of the characters – essentially a sequence of reminiscences – are recounted in detail, sometimes in conversation, other times in solo. Though we occasionally find ourselves in other cities, it is the city of New York that gets the most attention and where much of the action takes place.

It is Charley, the central character of the play, whose catalogue of experiences – two marriages (one to a museum guard), her uncle Stanley’s funeral, an abortion, a one-night stand with a pilot who fathered the birth of her daughter, and her eventual demise – each happening signifying a different time period, that keeps our eyes and ears riveted to the stage.

Though all of the characters get to have their say in the sun, some loving, some not exactly, it is Edie Falco’s impassioned monologue in which she lists all of the things she wants to experience once again before she dies, that pulls your heart from your chest.

The magic of this play lies in the everyday ordinariness of each character’s lives which frequently tend to echo our own. I might add, when the lights went down there was not a dry eye in the house. Nor was there a heart left untouched.

Manhattan Theatre Club’s production of Simon Stephen’s play Morning Sun opened on Wednesday, November 3, 2021 at New York City Center at 131 West 55th Street. It closes on Sunday, December 19. Running time is 1 hour and 40 minutes with no intermission. For more information, or to buy tickets check out www.nycitycenter.org or call 212- 581-1212