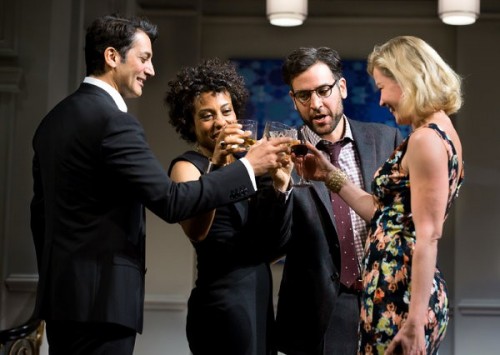 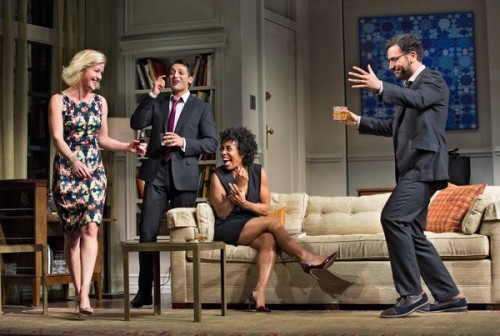 A dinner party from hell.

After a premiere in Chicago Ayad Akhtar’s Disgraced transferred to Lincoln Center and won the Pulitzer Prize for Drama in 2012. This season it opened on Broadway in October and has been included in the 2014 top ten list by New York Times critic Charles Isherwood.

It is a dense and thought provoking play focused on a discourse about the essence of Islam in contemporary society. The pace of that discussion escalates from dinner party discussion to explosive violence and the ruin of the central character Amir (Hari Dhillon) a secular Muslim and attorney for a Jewish law firm.

In order to obtain that position he declared his country of origin as India. Because of a series of incidents that culminate in his dismissal and Disgrace it seems he has falsified his heritage and mostly lived a lie calculated to achieve success, indeed the American dream, in upper middle class society.

Yes it is technically true that he was born in India as he argues it preceded the division that created Pakistan where he grew up. This deception, as well as others, gets a bit confusing. We are drawn into his webs of deception and self loathing but the thread gets hard to follow.

The arguments about the nature of Islam, medieval vs. modern, peace vs. terrorism and 9/11, get difficult to follow. The Pulitzer reflects that this most literary of plays must also be read and dissected as well as seen in order fully to understand the agenda and mandate of the playwright.

Too much history, philosophy and religion is compressed into just one act and 90 minutes. It takes a better mind than mine to comprehend and follow all of that information in just one take. In addition to reading the script this is a worthwhile play that I would enjoy seeing again. If I could afford those daunting Broadway prices.

To fast track his agenda Akhtar has stacked the deck with lions and lambs. In a less than paradise setting they are triggered as natural antagonists to devour each other.

Amir’s wife Gretchen Mol (Emily) is as intrigued and respectful of Islam as he is not. We spectulate that she married him precisely because of her naïve take on his religion. She creates pattern and decoration paintings based on Islamic designs. They intrigue Josh Radnor (Isaac) a Jewish curator at the Whitney Museum who wants to build a special exhibition around her innovative and timely work. He is married to Karen Pittman (Jory) an African American colleague in Amir’s law firm.

The wild card in this explosive mix is Amir’s nephew Danny Ashok (Abe) who was also born in Pakistan. Because of the prejudice and suspicion of Muslims after 9/11 the adolescent changed his name to Abe Jensen from Hussein Malik.

Like the uncle he looks up to the boy just wants to be accepted and prosper in American society. But he has been praying in a mosque where the allegedly radical imam has been arrested for raising money for Hamas. Not true Abe insists prevailing on Amir to defend the holy man.

Not since the beginning of his career has Amir practiced criminal law. His field is corporate mergers and acquisitions. Under pressure from his wife and nephew he agrees to see the imam.

With contempt he describes how time spent with him entailed preaching that he return to prayer. Reluctantly he appears with the accused man during a court appearance. It is falsely reported in the NY Times that he represents the accused and his law firm is implicated in the defense. This sets in motion the chain of events that will result in his dismissal.

The play is set in the elegant and expensive apartment of Amir and Emily. The dinner party they host is a gathering of friends who also leverage each other with career ambitions. Initially they are sophisticated and civil. The conversation focuses on a fennel and anchovy salad and banana pudding from Magnolia Bakery.

The easy banter quickly turns contentious. As a liberal Jew in the arts Isaac has a broader view of Islam but lacks specific acquaintance with the actual text of Quran. Emily has studied it thoroughly while Jory who is mostly out of the loop on its details adds that she read some passages in college.

Isaac debates the distinctions between Islam as a religion of peace and tolerance and “Islamo-fascism.” Amir counters sharply that Quran is “one very long hate mail letter to humanity.”

Further Amir describes Islam as a religion that emerged from a medieval desert people struggling to survive under the harshest conditions. In that environment it evolved as Sharia law personified by the oppression of women including beatings if they do not respond to the commands of their husbands. That will prove to be particularly ironic.

“There’s a result to believing that a book written about life in a specific society 1,500 years ago is the word of God: You start wanting to recreate that society,” Amir says. “After all, it’s the only one in which the Quran makes any literal sense. That’s why you have people like the Taliban.”

Of course that argument is hardly unique to Islam. It also applies to fundamentalist sects of Judaism and Christianity.

Pressed by Isaac we learn that while Amir has rejected the orthodoxy of Islam he has respect and pride for its global advances. Including an admission that America got deserved pay back through 9/11.

Having reached the boiling point there’s a time out as Jori and Amir decide to take a walk. It's when she will reveal that she’s been made partner while yet again he has been passed over.

After that, as they say, the shit hits the fan. Which you may find out by seeing this head thumper of a play. Perhaps after Broadway it will make a run through regional theatres. As I said it would be great to see it again and again and again.

While extreme and forced this compelling drama opens the can of worms that is at the heart of East vs. West tensions and terrorism.

Like Amir many of us in the modern world reject the religions of our youth as essentially restrictive, outmoded and superstitious. We prefer philosophy and science to ignorance and faith.

Until backed into a corner when push comes to shove. What is that saying? There are no atheists in foxholes. For America 9/11 changed everything. But is all of Islam, the world’s largest and fastest expanding religion, truly the enemy? Do we really need to revive the Crusades? If that means ISIS, well, yeah.

It gets complicated. Which is why you should make every effort to see Disgraced.