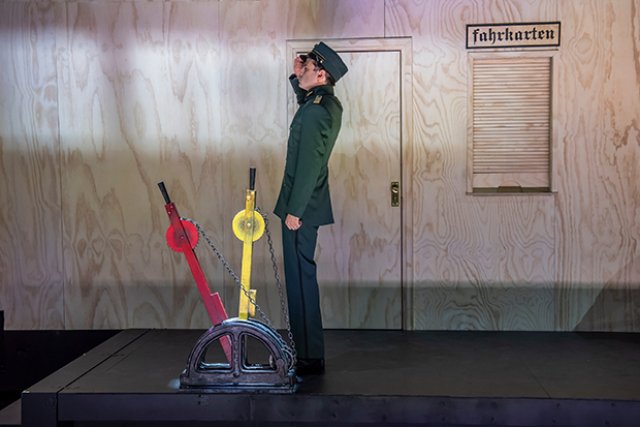 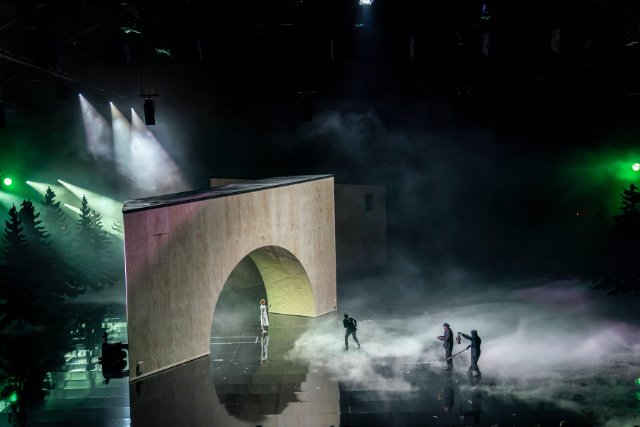 Love and Death at the Viaduct

Entering the drill hall at the Armory, we are greeted first by sounds of birds flitting through the tall, pine trees in a forest stage left and right.  Branches are laden with snow.  The platform of a train station fills the front of the station. The scent of the plywood from which the big blocks of the moving stage are built, also wafts through the hall. The station master’s home is above the tracks. His wife often sits in the window, observing the action below.  Express trains roar by, their lights glancing off the ceilings and the other block structures on a shiny floor, whose surface reflects.  We are taken in.

Judgment Day, a 1937 play by a Hungarian aristocrat, Odon von Horvath, has been adapted by Christopher Shinn.  Townspeople are sitting on benches waiting for their train.  When other passengers ask where the station master is, they laugh.  He comes out when the train comes in, we're told. This train is always late.  Today it’s forty-five minutes overdue.

We see the station master’s wife, the lovely Alyssa Brenahan, sitting in her window, like a prostitute in Amsterdam.  Turns out she is only crazy.  Her slim, sea green dress which swirls about her.  She is thirteen years older than her husband.  This informs the town crier, Frau Liemgruber, whose prim exterior does not hide her vicious gossipiness for long.  Harriet Harris is as wicked as she is elegant, striding back and forth across the platform.

Moments after the train arrives, we hear a shambling crash and injured passengers limp out of the cars.  Many have died.

Why this accident occurred is the thrust of the play which seeks truth.  It entails the power of story. Once someone like Frau Liengruber gets hold of it, the story twists and turns, distorts and finally destroys.  Richard Jones has conceived an intimate drama with a chorus of harpies which feel timeless in the giant Armory space.

Responsibility too is a subject and for what?  Only one character, the pharmacist Thomas Hudetz, who is the brother of the station master’s wife, remains on the platform at the play’s end.  He is a decent man who treats people like human beings.  Luke Kirby gives a delicately nuanced performance which starkly contrasts with the other characters. Hudetz is the only character who is not judgmental on judgment day.

Townspeople form the chorus.  They are all too eager to point a finger at someone else.  They often move to a choreographed tale designed by Anjali Mehra.  Sound by Drew Levy and Daniel Kluger and music by Kluger give an operatic feel to the whole.  The music sets the tone of incipient injustice and even murder.

The Drill Hall wraps around the large moving parts.  A viaduct, whose arch matches the arched ceiling of the room, is striking.  Only the bar Wild Man Inn, owned by the Innkeeper played with robust vigor by Tom McGowan, seems ordinary.  There the station master’s draw for women is on display.  The Innkeeper has a party for the stationmaster when he returns, exonerated from the murder of the his own daughter.

The rustling trees, the moonlit sky, billowing snow and all the sounds they make create a space like the outside world.  By contrast, each actor is showing us internal, intimate survival techniques. We are up very close.  The big world outside threatens with its new machines.

Comparison with contemporary life can be made, but this work is timeless. It is bound only by the schedule of trains, which the station master always salutes.

The Nazis banned the work when it was first produced.  We welcome it now in a stunning production.