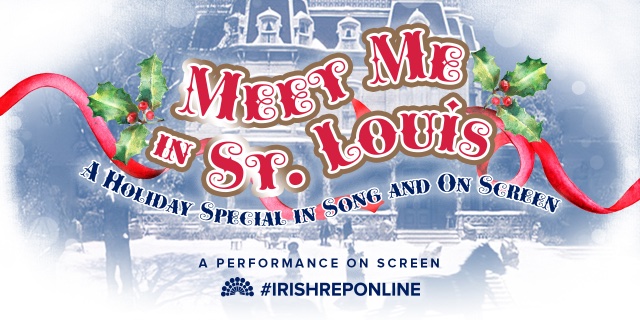 The Irish Repertory Theatre presents Meet Me in St. Louis.

Meet Me in St. Louis as a film was exceeded in box office success only by Gone with the Wind. Charlotte Moore has adapted and directed the stage musical, now streaming from the Irish Repertory Theatre. This production was backed among others by great Broadway impresario Rocco Landesman. He has seen the future and it works.

The streamed drama opens with the orchestra performing the stories’ lietmotifs. We can hear the Smith family, the city of St. Louis and the World’s Fair which provides the musical’s climax. The ornately framed photo of the Smith’s home is pictured at the start of the streamed evening, just as the image opened the original film.

Sally Benson, who wrote the short stories on which this movie and now the stream is based, commented, “Nothing much happens. Just little incidents like a valentine in the palm of your hand.”  The small incidents serve the plot well: a long distance telephone call at dinner time, a going-away party for a college bound son, trick or treating, a trolley ride. You will probably remember The Trolley Song,  The Boy Next Door and of course the melancholy Have Yourself a Merry, Little Christmas.

The plot’s small incidents are woven together brilliantly by Moore. They give us, as critic James Agee remarked, a real love story between a happy family and their way of life.  This uplift helps in this particular holiday season.

Early on a charming Kylie Koiuka reprises Margaret O’Brien’s Oscarette winning turn as Tootie.  She discusses the near-death state of her favorite doll with the iceman, Mr. Neely.

'Tootie': I expect she won't live through the night. She has four fatal diseases.
Mr. Neely: And it only takes one.
'Tootie': But she's gonna have a beautiful funeral in a cigar box my Papa gave me, all wrapped in silver paper.
Mr. Neely: That's the way to go if you have to go.
'Tootie': Oh, she has to go.”

At dinner time, the family tries to give daughter Rose privacy as she awaits a call from a beau in New York. The only member of the family unaware of the expected phone call is Papa, and he feels like an outsider: “Just when was I voted out of this family?

Two sisters discuss appropriate kissing.
Esther: I'm going to let John Truett kiss me tonight.
Rose: Esther Smith!
Esther: Well, if we're going to get married, I may as well start it.
Rose: Nice girls don't let men kiss them until after they're engaged. Men don't want the bloom rubbed off.
Esther: Personally, I think I have too much bloom. Maybe that's the trouble with me.

Tootie is allowed to stay up and sing a song for her elders. She chooses "I Was Drunk Last Night, Dear Mother" and sings, to everyone's amusement:

I was drunk last night, dear Mother
I was drunk the night before
But if you forgive me Mother
I'll never get drunk anymore

(This is one of the tips to the Irish. The only Irish character in the stream is the maid, Katie. )

The evening of these delicious small incidents is perfectly played in Charlotte Moore’s streamed production. Song and dialogue are tightly woven into the dramatic structure. The movement of the actors is to the beat of the music.

Working in this new form, Moore makes the frames as interesting as the actor’s performances. Bits and pieces of the sets and locations have been carefully selected and evoked. The front porch of a turn of the 19th century Victorian house, its main entrance way, and the living room and dining areas are all in view. A miracle considering the challenges of streaming with actors in many different locations.

Dance is only briefly tried. This is particularly difficult when all the actors are in separate locations. Yet the whirl of Esther and her grandpa who disappear behind a Christmas tree from which Esther emerges in the arms of her true love is delightful. In this form, the clever us of sets in the homes of performers gives the production unity. Even a kiss across a seamless wall works.

We are told that it has been a drab year but that next year will be better. We can muddle through. Of course we must. We can do it in the spirit of this delightful production.

Charlotte Moore, who brought the musical to stage of her Irish repertory company, is a lovely, lilting narrator. Moore makes the lives of ordinary Americans into poertry.

All’s right with the world, somehow.  Charlotte Moore and the Irish Repertory Theatre give us hope in our bleak times.

The Irish Repertory Theatre notes:  “…we believe that everyone deserves access to high-quality theatre that is affordable and accessible. We are proud to offer free and deeply discounted access to all virtual programming, particularly during the Covid-19 shutdown, when so many people are experiencing financial hardship. We ask that if you are in a position to support us, you might consider making a tax-deductible donation in conjunction with this digital event. Your contribution will ensure that we can continue to offer top-quality digital events at low prices, create new jobs for artists and actors, and maintain our operations as we face an uncertain future.”

Available through January 2 at the Irish Repertory Theatre.