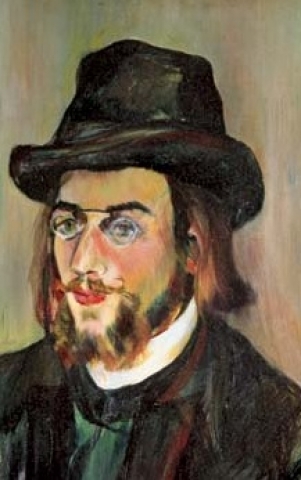 Erik Satie portrayed in oil by the love of his life, Suzanne Valadon. 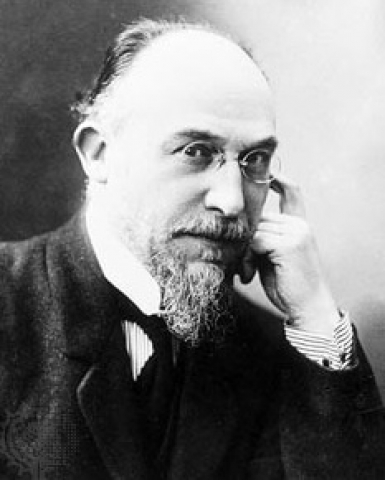 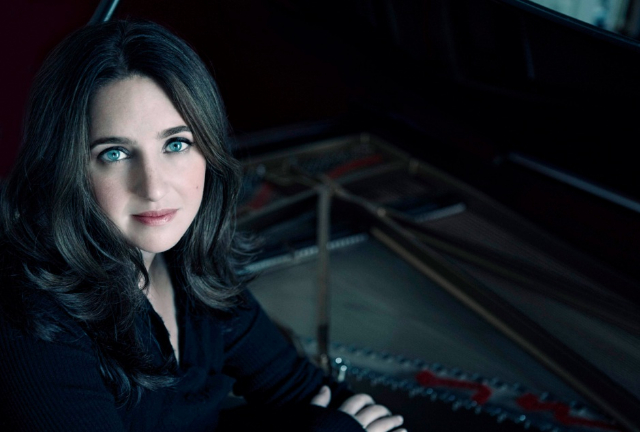 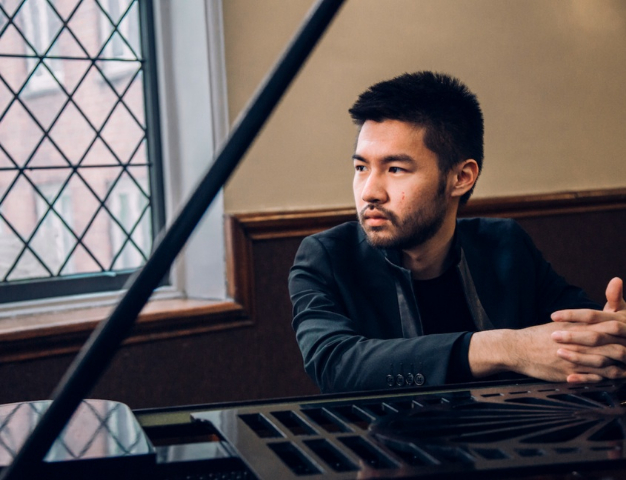 It is the 150th anniversary of the birth of Erik Satie, the French composer who first presented ideas that are expressed often in contemporary music. Incessant repetition in the base and no time signatures to mark the beginning or the end of a piece, which exists floating in the universe, out of time, if that is possible.  The treble phrases are often beautiful.  For John Cage, Satie was not only relevant, but indispensable.

To be interested in Satie, Cage wrote, "you must accept that sound is sound and a man is a man." Satie's career was an elaborate attempt to tear down the walls of tradition and convention and all barriers that separate art from life.

Leo Liberatore, performing as Satie, interspersed the pianists' performances with Satie’s own words. Erin Ortman directed to reveal an avowed Communist, and a complex man who lived simply. One year he bought seven velvet suits which were worn serially until they became threadbare.

Satie has the charm and the light lines and the warmth of a Paul Klee painting. With a seemingly simple bass beat whose repetition often drives the treble cleft melodies, he leaves the tempi to the performer and this can yield enormously satisfying results. Pianist Simone Dinnerstein gives the treble phrases arcs. Her held notes shimmer. Her conclusions disappear in the night as the lights on stage go down.

Dinnerstein makes it a habit to play everything. She does concert and albums with contemporary composers like (folk rock) Tift Merritt.   Her latest album, Broadway-Lafayette is one of the destination subway stops for the Sheen Center.

Of Broadway-Lafayette, Dinnerstein says, “Over the centuries, France and America have influenced and supported each other in many ways, and this music explores the link between the two cultures. George Gershwin is the quintessential American composer. He immortalized his own trip to France in American in Paris and his music broaches aesthetic boundaries in a way that few other composers have managed – he combines the tunefulness and syncopation of jazz and popular music with the rich harmonies and rhythmic creativity of high art. Philip Lasser, this album’s living composer, is the son of a French mother and an American father, and grew up in a bilingual household. His musical voice is an amalgam of both worlds, circling around Bach’s sun."  So is Dinnerstein's.  Her work with singers pays off in her gorgeous lines of melody.

Dinnerstein is daring, as is Conrad Tao, the prodigy emerging into adulthood with a yearning taste for an extended view of the world of music.   Tao sat on the stage of the Gilman Opera House at BAM for David Lang’s new opera, the loser, starting in darkness and then emerging into the full light of the stage as the loser disappeared and Glenn Gould emerged.

Tao often leans back a bit to hear the composer’s message. Playing Satie, his listening merges with his fingers and brings forth musical moments of excruciating presence. Tao is sensitive both to Satie’s joy and wit and to the pain he clearly experiences.  His performance captures the fresh and newly-born tones of Satie's music.  Surely Satie would have enjoyed Tao's irresistibly droll air and curious sense of secrecy.

As Tao performs, you hear how Satie prunes and condenses the dialogue between the left and right hands.  Some unexpected harmonies delight.

While Satie did not want to be remembered as someone who laid the groundwork for minimalistic music and repetition, his name has always been present in that context. The Sheen Center event helped us understand the man and again appreciate his compositions.

Most often Satie wrote for the piano or for the piano and voice. Others have transcribed his music for chamber groups and orchestras, but he really is best appreciated as he intended his music to be heard on the piano. Tao and Dinnerstein, and also Adam Tendler and Arnold de Mare make the joy of listening to him live again.

Russian-born pianist Vladimir de Pachmann talked to the audience while he played.  The witty instructions written in the score by Satie to direct a performance of his work might well have been read by one of the artists performing in the birthday celebration.  Satie said, No, never.  Yet Satie is as difficult to read as his charms are easy to enjoy.