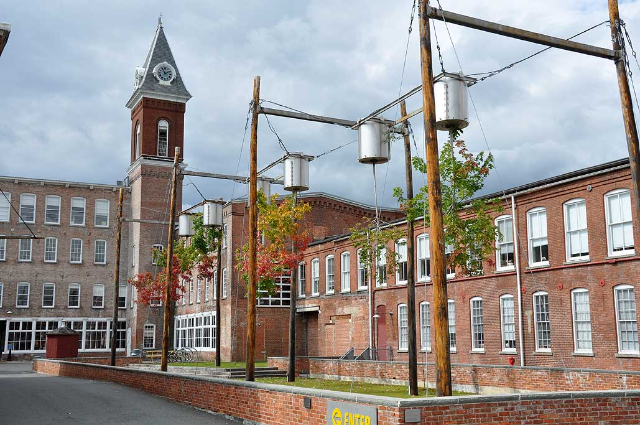 MASS MoCA heads into the winter/spring season with new works in the spotlight, on stage, and in the galleries. The season kicks off on January 20 with the museum’s annual Free Day, when MASS MoCA opens its galleries, free of charge, and activates its art with family-focused activities and performances throughout the day. Quindar, a sound and visual venture by Wilco’s Mikael Jorgensen and collaborator James Merle Thomas, performs on the night of January 20, and launches the steady season of work-in-progress performances — which also includes residencies and work-in-progress showings with Wisconsin-bred Bon Iver live-scoring TU Dance, and operatic theater-maker Alicia Hall Moran’s one-woman show about her pursuits in ice skating. The legendary Godspeed You! Black Emperor wakes from a two-year hiatus for an epic, earth-rattling show on March 10, and Sylvan Esso fills the Hunter Center on March 31 for an already sold-out night of electronic pop music. The annual High Mud Comedy Fest, headlined by Mike Birbiglia, returns on March 16 and 17 for some serious laughs. And, by April 6, five new exhibitions will open, flooding 90,000 square feet of MASS MoCA’s main galleries with fresh art. Rewarding “early bird” ticket buyers, MASS MoCA discounts tickets 25% for most winter/spring 2018 performances by December 31. Early-bird prices do not include festivals (which have a separate pricing schedule), preferred tickets, artist talks, $5 member tickets, member openings, and select shows which include POLIÇA, Godspeed You! Black Emperor, and Bon Iver & TU Dance. (Discounts do not combine, and discounted tickets are non-refundable and non-transferable.)

In the galleries
Drawing on the mysteries of the night and its poetic possibilities, over a dozen artists conjure the many moods of the evening — as well as the light that illuminates the darkness — in The Lure of the Dark: Contemporary Painters Conjure the Night. The group exhibition is on view beginning March 3. On view beginning March 25, Allison Janae Hamilton: Pitch turns to the sights and sounds of the southern landscape. Its title refers to the tall pines of the Sunshine State, while the show paints a multimedia landscape both magical and menacing — fluctuating between gothic fantasy and reality. Beginning January 13 is Natasha Bowdoin: Maneater, which decorates our first-floor gallery with a lush paper thicket of larger-than-life, boldly colored floral forms. Rachel Howard’s Paintings of Violence is on view beginning February 17 — with ten paintings and one sculpture surrounding Joseph Beuys' installation. We’ll raise 4 flags this spring as part of Pledges of Allegiance, a serialized commission of flags that aims to inspire political participation across cultural institutions — a project of Creative Time in New York City. A members’ opening reception for Lure of the Dark, Pitch, Maneater, Paintings of Violence, and Pledges of Allegiance takes place on March 24. On view beginning April 7 is Lebanese painter Etel Adnan’s A yellow sun A green sun a yellow sun A red sun a blue sun. The intimate exhibition showcases a selection of Adnan’s abstract landscapes alongside a small reading room.

Main stage
Montreal’s Godspeed You! Black Emperor pledges an epic night of music on March 10, on tour for the first time in two years. Known for apocalyptic rock instrumentals with thundering crescendos, expect this to be an “achingly beautiful” wall-of-sound experience (Pitchfork). A North Carolina-based band with ties to Bennington College, Sylvan Esso performs March 31— and sold out just days after our announcement. In a co-presentation with Jacob’s Pillow Dance, New York’s beloved Okwui Okpokwasili presents her newest piece, Poor People’s TV Room, on April 7. The Bessie Award-winner links two historical events in this politically charged production: The Women’s War of 1929 in Nigeria, and the recent Boko Haram kidnappings of more than 300 schoolgirls.

Works-in-progress
Visitors get a glimpse of art in the making with five residency programs that each concludes with a work-in-progress show. Wilco keyboardist Mikael Jorgensen and art historian James Merle Thomas return to MASS MoCA on January 20 as Quindar. Packing the house at last summer’s Solid Sound Festival, the multimedia duo synchs electronic music with historical recordings and film sourced from NASA’s early missions. Stereogum calls it “super awesome, historical, space noise art.” On February 15, indie-pop-electronic star POLIÇA, together with Berlin’s maverick orchestra collective s t a r g a z e, presents Music for the Long Emergency, the culminating work of a year-and-a-half collaboration. After POLIÇA recorded work at his studio, Justin Vernon, aka Bon Iver, holds, “they’re the best band I’ve ever heard.” Coincidentally, repeat Grammy Award-winner Bon Iver also visits MASS MoCA this spring to perform a live original score for Minnesota’s TU Dance. The company’s co-founder and “incredible polyrhythmic genius” Uri Sands guides his troupe through movement that lilts and tumbles alongside Vernon’s expansive sound (Star Tribune). You can see this work on March 24 or 25 before it premieres in April in the Twin Cities.

William Kentridge — a remarkably versatile artist whose evocative vision combines the political with the poetic, while combining elements of visual and performative arts — brings a troupe of more than 50 performers for a two-week residency culminating in a May performance of his in-progress work, The Head and The Load, that deals with subjects as sobering as apartheid, colonialism, and totalitarianism. Renowned mezzo-soprano Alicia Hall Moran tells the story of the 1988 Calgary Winter Olympics, in which two figure skaters representing America and East Germany battled for Olympic Gold. Moran is a former figure skater herself, so expect an operatic fantasy for the concert stage, ice skates included, on January 27. On April 28, Bessie Award-winning Ephrat Asherie offers a sneak peek into her dazzling exploration of breaking, hip-hop, house, and vogue. Co-presented with Jacob’s Pillow Dance, the performance features a bumping score of classical music flavored with samba and Afro-Brazilian rhythms.

Up in the Club
Guitarist and composer Rafiq Bhatia performs an electronic soundscape with a new trio on February 10. His background in jazz, classical minimalism, and electronic music — “transcending real sound in real time with the unexpected” (The New York Times) — situated him as a principal member of trip-hop group Son Lux. February 24 will be full-force fun when the joyful band Sinkane fills our most intimate concert space. With blazing horns and a razor-sharp message about community, this six-piece project is nothing short of music magic. North Adams native CJ Field is in town for a spirited show of rocks-and-roots on March 3. His edgy and gritty sound drums up images of Sam Cooke, Levon Helm, and Ryan Adams.

The members of Trio Da Kali bring us impassioned and unforgettable songs from their Mande culture on April 14 using only voice and traditional West African instruments. NPR praises them as “staunch defenders of an ancient tradition.” Radha Blank presents a “whip-smart, emotional and timely tale about gentrification and cultural identity” on April 21 (The Wall Street Journal). The one-woman show follows a Korean-owned nail salon in Brooklyn as it reckons with the opening of a rival salon down the block. Per tradition, we close the season with a party and dance it all out on May 5 with eleven-member Zemog El Gallo Bueno, their music adventuring from ‘30s Puerto Rico to ‘70s New York salsa.

Comedy
MASS MoCA’s High Mud Comedy Festival returns for a foolishly funny weekend on March 16+17. The annual early-spring yuk-fest will be stacked with comedy-club kings (hello, Mike Birbiglia) and queens (all hail Nellie McKay), half-brewed beer tastings, and mocking museum tours. More lineup details are to be announced, but for now, pen in mud season in the Berkshires for a jam-packed weekend of serious laughs.

Film
MASS MoCA’s annual documentary series, True Convictions, kicks off its 4-film run on March 29. Screening each Thursday through April 19, cinematic tales about those who go the distance include Ask the Sexpert; Gulîstan, Land of Roses; Babylon Dreamers; and True Conviction. Stay for a Q+A with filmmakers after each screening. On May 12 we present another film-with-conversation event. Mudbound tells the epic story of farmers in the American South during World War II, drawing on the same sights, sounds, and history of the southern landscape that Allison Janae Hamilton draws upon in her exhibition Pitch. Lauded director Dee Rees will appear for a conversation with Hamilton after the screening.

For Families
Free Day, an annual event in which MASS MoCA throws opens its door and waives admission for all visitors, falls on January 20 from 11am to 7pm, with activities for families throughout the day. Enjoy live music, make your own art, watch a pop-up performance, and hop on a gallery tour.

And more
On April 14 we slow it down on International Slow Art Day. Museum educators will lead contemplative walks through the expansive campus, deep breathing exercises, and 15-minute guided tours featuring a single work of art. And, on May 11, celebrate creativity at the 8th annual Teen Invitational, when students and teachers from nine Berkshire County high schools display their works of art. The exhibition, always inspirational, remains on view during regular public hours on the weekend of May 12-13.

MASS MoCA’s Assets for Artists program helps working artists in all disciplines strengthen business skills as they pursue a creative practice.  A full slate of workshops including Personal Finance and Career Planning begins anew in January. The Studios at MASS MoCA host artists and writers for self-directed one to eight-week residencies. January 8 is the deadline for applications for residencies that begin this spring. Massachusetts artists can apply now through April 13 for fall studio sessions.

Images
High-resolution images of these events are available through this link: bit.ly/WinterSpring2018.

Season at a glance, by date: