The Wiz In South Florida 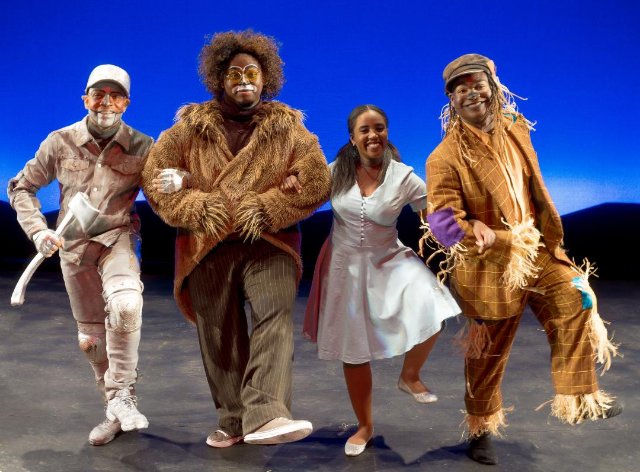 Soul and spirit are characteristics we would expect from a production of the multi-Tony-winning musical The Wiz.

But too often, this production is tedious and even moribund.

Moreover, for the most part, the production lacks magic. In addition, the Lauderhill Performing Arts Center’s sound system needs improvements.

And while the five-piece live band is vigorous, too often it drowns out the performers, who sing the show’s mixed blend of rock, gospel and soul music.

The shortcomings mainly occur throughout the first act, beginning with the tornado scene.

Ensemble members dance rapidly and wave mops (albeit too lightly) probably in an effort to represent chaos and a violent wind. Yet, this does little to convincingly suggest a cyclone. The production team could better use sound and even flying effects to make it appear as though the storm hoists Dorothy and her house up and plants them in the Land of Oz.

Speaking of force, Sarah Gracel as Evillene, the Wicked Witch of the West, imbues her with power. Specifically, Gracel conveys attitude and a sense of entitlement. She also has a powerful belt. However, no aspect of the performer’s portrayal suggests the slightest hint of wickedness or anything remotely fear-inducing.

Indeed, it’s hard to believe that this big, commanding, yet non-frightening woman would terrify others so badly into seemingly inescapable servitude and guard duty.

On the positive side, cast members sing the rousing, “Everybody Rejoice” with a convincing and exuberant, exultant sense of liberation.

But again, the weight lifted from this witch’s servants and bodyguards doesn’t feel all that heavy. That’s because Evillene, as played by Gracel, doesn’t sound threatening.

Certainly, when The Wiz premiered on Broadway in 1975, many in this country were probably feeling light from a burden lifted. Eleven years prior, President Lyndon Johnson signed the Civil Rights Act of 1964. The legislation ended discrimination on the basis of race, color, religion, sex or national origin. But back then, just like today, work remained to improve the plight of blacks and other minorities.

Symbolically and metaphorically, The Wiz suggests a journey toward liberation, equality and improvement. These symbols and metaphors, together with the show’s soul and spirit, help make this Wonderful Wizard of Oz retelling specific to the African-American narrative.

Particularly, the yellow brick road serves as an apt symbol for a metaphorical journey. Especially in today’s world, when society has regressed in race relations, one might view the Emerald City as a kind of promised land.

For example, in Lion’s case, as in the original tale, he seeks courage. And like some members of minority and marginalized groups these days, the character seeks bravery to speak out to claim his rightful place within his world.

But there are obstacles to reaching the Emerald City. An obvious one is the gatekeeper (Kolten Bell, more clownish than formidable). Other barriers include the city’s townspeople, who laugh at and mock our Dorothy and her friends as they seek to see the Wiz (a strangely sensual, sometimes severe, but always unpredictable Jamari Williams).

Oddly, the Wiz doesn’t hide behind an oversized mask that is part of the set for any sustained period of time. This choice by director and choreographer Lloyd Culbreath lessens the mystique and fear factor behind the Wiz.

In fact, in Stage Door’s production, Dorothy and her friends don’t unmask this revered figure from a protective, tough veneer. Instead, they merely discover a control panel-like machine designed for the Wiz to alter his vocal modulations. Then, our heroes discover he’s merely a common man. However, he’s not without redeeming qualities, and Williams conveys his character’s inherent goodness with a stirring, encouraging rendition of “If You Believe.” It’s an empowering song that speaks to many of us who don’t trust our instincts.

By contrast, perhaps this show’s most famous number, “Ease on Down the Road,” sounds lethargic and rushed. The song doesn’t even grow in intensity during the number’s repetition as additional characters join the group on their way to the Emerald City. Further, the performers playing the Yellow Brick Road (how odd is that) lack any semblance of energy.

Fortunately, the opposite is true for Nayomi Braaf as Dorothy. Overall, she imbues the girl with contagious and convincing optimism, zest and an encouraging demeanor toward her friends. In addition, Braaf possesses a powerful and expressive, sweet voice. All of this endears us to Braaf's Dorothy.

While The Wiz’ book writer, William F. Brown, tells his adaptation of the Oz story within the context of African American culture, Dorothy’s character arc is universal.

She begins as a sulking, spoiled, immature girl. Gradually, she transforms into a mature young woman who comes to realize the importance of love, family and home. Of course, the friends she meets along her metaphorical and physical journey play a large part in teaching her the importance of close relationships.

Truth be told, Tinman (a charming Ben Bagby), Scarecrow (a restless, impulsive Kedrick D. Faulk) and Lion (Darius J. Manuel as a timid but loving creature, more pussycat than beast) have become a second family to Dorothy by the show’s end.

Moreover, as is the case with most compelling stories, the characters become a kind of family to us as well.