At MoMA through February 4 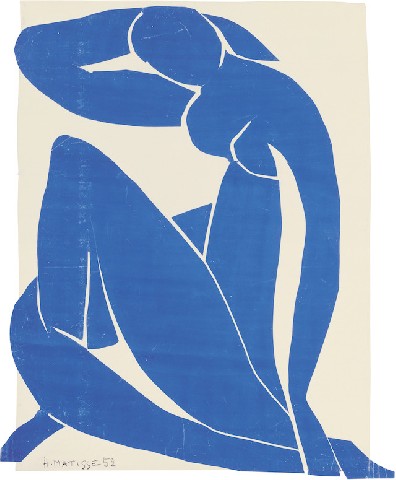 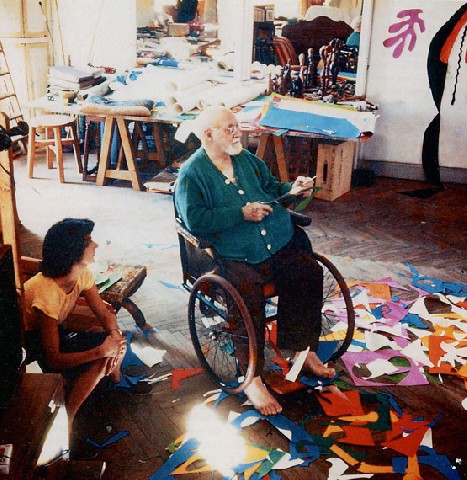 Matisse was confined to bed and a wheel chair while making the collages. 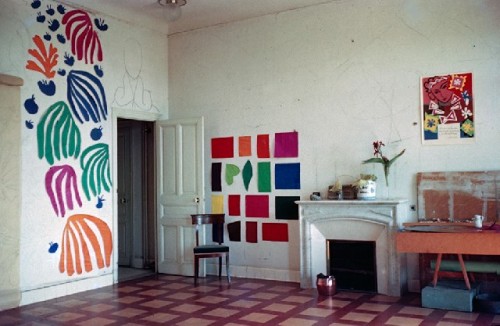 Studio of the artist. 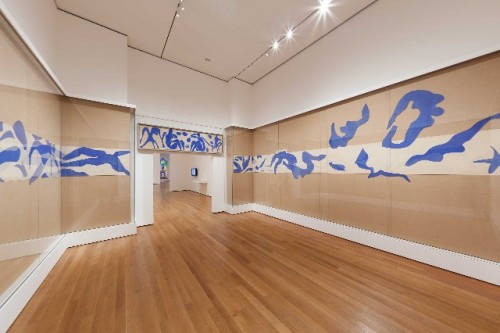 The enormous collage The Swimming Pool has been restored by MoMA which owns it. 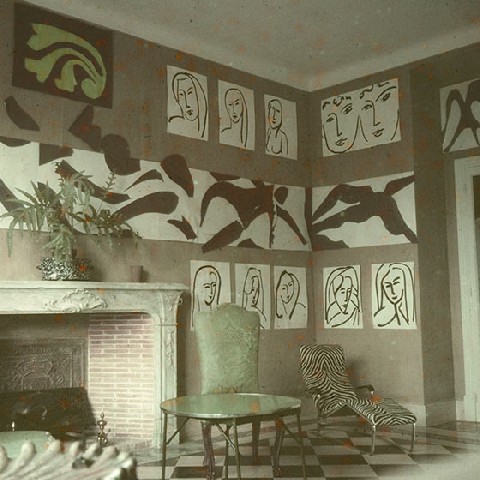 A vintage image of the Swimming Pool as it was displayed in his home. 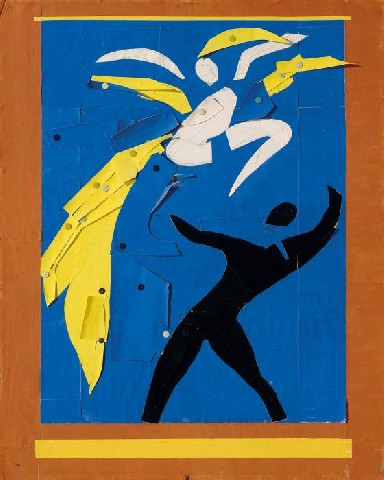 A collage revealing its pins. 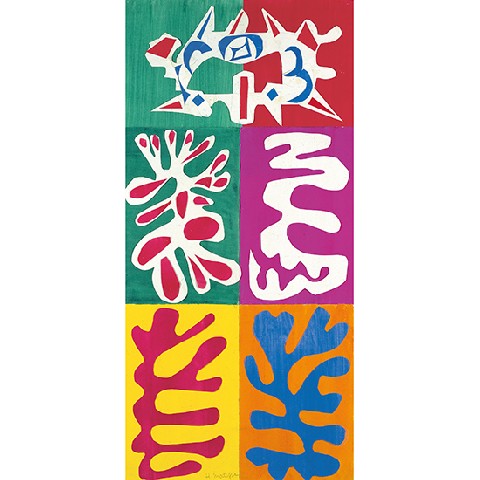 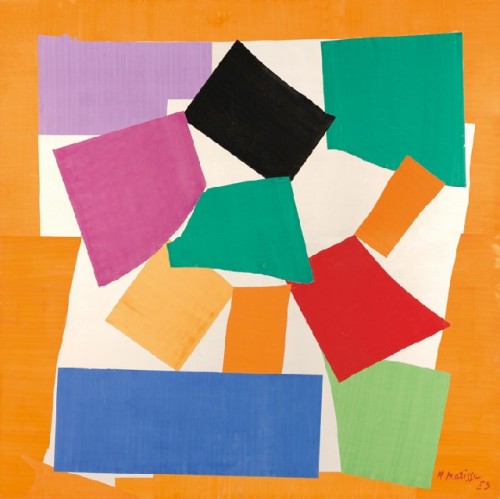 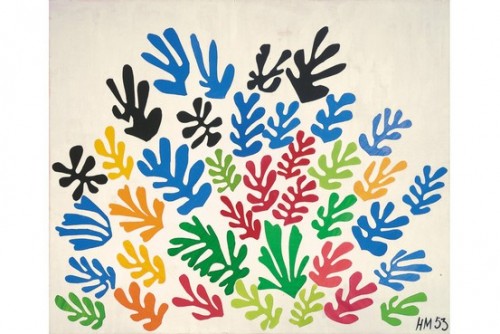 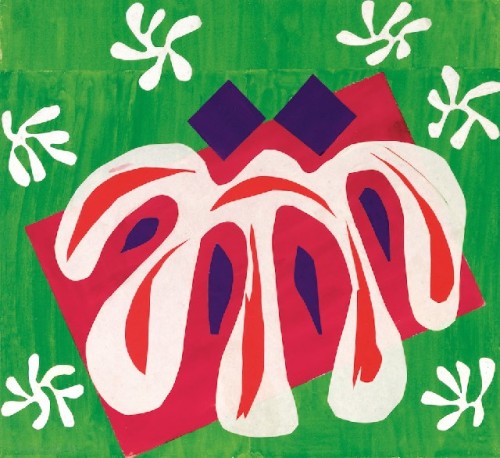 During the busy holiday season The Museum of Modern Art is featuring the blockbuster exhibition of the artist’s triumphant and inventive last works Henri Matisse: The Cutouts. The exhibition drew some 500,000 visitors last summer to London’s Tate Modern.

To control the flow of visitors through the exhibition tickets are issued for specific dates and time.

The often enormously scaled works with brightly colored paper collage are both joyous and fresh as well as fragile and ephemeral. A major panorama that once adorned his dining room in Nice “The Swimming Pool” has undergone several years of restoration and is again displayed, carefully, at MoMA which owns it.

In an accompanying video and signage we observe how it was removed from its original support, repaired where necessary, and inpainted to bring back bright colors. Even imperfections in threads of the new linen support were mended.

Walking through the exhibition we noted examples where the bright colors of one work had faded relative to other similar pieces. Light levels are not kind to these delicate collages.

In the last decade of his life while confined to bed and a wheel chair he worked with great spontaneity and invention cutting out sheets of paper that had been prepared with gouache. A video of poor quality shows him working with an assistant placing elements of cut paper on walls with push pins under his direction. He directs verbally as well as points with a long stick. From bed he used charcoal on the end of a stick to draw on paper attached to surrounding walls.

These improvisations were then taken down, reassembled and glued to supports. Aspects of this experimental approach have led to issues for their display and conservation.

In 1947 he published a suite of collages which were then printed as the book Jazz. It consists of 250 prints for the folded book version. There are also 100 impressions for the suite, which contains the unfolded pochoirs without the text, based on paper cutouts. A pochoir is a stencil print.

The book is so astonishing that it is surprising to learn that the artist hated it. The resultant graphic process flattened and neutered all of the nuances of an actual collage. To most viewers it would be a moot point but it was also an impetus for Matisse to approach the large scale works as stand alone pieces and not a step toward a more stable graphic form as a book, or oversized print. A generation later that would be the jumping off point for Warhol and Rauschenberg who silk screened images onto canvas then enhanced with paint.

Consider that these last great works by Matisse were created under conditions of adversity. After four decades of marriage his wife divorced him in 1939. War broke out and he fled German occupied Paris to relocate to Nice. Southern France was under control of the Vichy government in collaboration with the Nazis. When that city was threatened he moved to nearby Vence and its Villa le Rêve. He was operated for cancer of the abdomen which resulted in a decade as an invalid. It became physically impossible to paint and sculpt.

Faced with all aspects of adversity few would have the strength and courage to continue. Not only did the artist prevail but with wild imagination and inspiration he reinvented himself.

Unlike his friend and rival Picasso, who in his last years cranked out Picassos (see John Berger on "The Success and Failure of Picasso"), Matisse broke ranks with his past and forged ahead with unprecedented courage and originality.
Prior to this last push his position as one of the foremost artists of the 20th century was well assured. Then he did something else. It is simply beyond compare.

Given the scale, color and patterning it is too facile to describe the work as decorative. It would be better to say abstracted. Within the genre of this work are many signifiers of avant-garde work that would follow. It is astonishing to see how he created crouching figures as large silhouettes of cut blue paper. The approach seems entirely intuitive as he knew the human form from a lifetime of observation. There was no longer a need to look and rather just an instinct to feel and extract it from the paper.

One thinks of the neo platonic sonnets of Michelangelo working on the series of unfinished Slaves that line the corridor of the Academia in Florence leading to his youthful David. The master spoke of liberating the figure from the stone. Matisse took a similar approach in releasing the figure and the shapes of nature from large flat sheets of painted paper.

During the post war era the American critic and formalist, Clement Greenberg, spoke of the importance of flatness, the integrity of the picture plane, the rejection of perspective and chiaroscuro as signifiers of avant-garde painting. All of those elements are vividly evident in the Matisse cut-outs.

Perhaps it is precisely how our eye has been trained by formalism that allows us to embrace this phase of the late Matisse as a precursor of our visual code and language.

What lingers in the work, a poke a finger in the eye of formalism, is the holdover of narrative. The works are always about something however abstracted.

In 1948 a Dominican nun who had been his nurse asked for advice for a chapel and its decoration. That resulted in Chapel of the Rosary in Vence for which he designed stained glass windows, vestments for the mass, and stations of the cross.

He considered the project among the most important works of his career. It extended into the 20th century a tradition of artists who created masterpieces for the church.