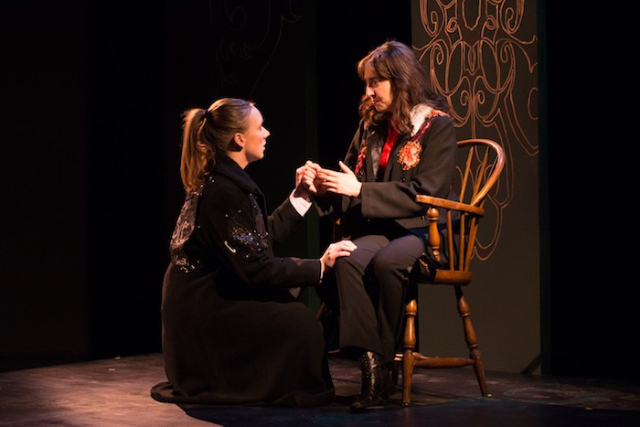 Gross Indecency: The Three Trials of Oscar Wilde is a documentary-style play set in a courtroom. Lest you think that sounds dry, it isn’t. The script is flush with the wit of the English poet-novelist-playwright, who was never boring. And lest you think it sounds like a gay play, it isn’t. Certainly members of the LGBTQ community will have a particular appreciation for this story of England’s draconian “gross indecency” law. But Moises Kaufman’s play is a story of justice and injustice, the role of art and artists in society, as well as older men’s fondness for younger men.

Promethean Theatre Ensemble’s new production of Gross Indecency is a fast-moving and compelling view of Wilde’s 1895 trials, conviction and imprisonment for the crime of homosexuality. Director Brian Pastor takes a gender-bending approach by casting female actors as Wilde and his lover, Lord Alfred Douglas. The cast of Kaufman’s 1997 play is usually nine male actors, but Pastor has cast five women and four men. Seven of the actors play multiple roles as lawyers, judges, narrators, witnesses and others.

Jamie Bragg stars as Oscar Wilde. Her performance is nuanced and persuasive as the jaunty Oscar in her every word, look, gesture and posture. After a few minutes, you forget she’s a female playing a male role. Heather Smith is somewhat hesitant as Lord Douglas, but strengthens vocally and physically as the play progresses.

The play covers the three trials in which, first, Wilde sues Douglas’ father, the Marquess of Queensbury (Ross Brawley), for leaving an insulting calling card at his club, and the second and third trials in which Wilde is tried for the crime of “gross indecency.” The script weaves together news articles, letters, poems and other writings, biographies of Wilde’s friends and enemies, and quotes by the inimitable George Bernard Shaw, a supporter of Wilde.

The legislation to criminalize male homosexual acts, passed by Parliament in 1885, is read aloud during the play by Queen Victoria (Steve Lords), with occasional interpolations of disgust by Shaw (Steve Lords). This little contretemps is quite delightful and a good example of Lords’ acting and comedy chops, which he demonstrates throughout the show.

Sir Edward Clarke (Kevin Sheehan) is excellent as Wilde’s attorney throughout most of his trials.

In the first trial, Wilde is suing the elder Douglas for libel because he left his calling card for Wilde with this message: “Oscar Wilde: posing somdomite.” (Wilde ridicules Douglas for his misspelling.) Wilde was already a man of wealth and celebrity. Two of his plays were running successfully in the West End at the time: The Importance of Being Earnest and An Ideal Husband. Wilde was married and the father of two sons. Sir Edward Carson (Cameron Feagin), solicitor for the defense, probed Wilde’s intent in his letters to Douglas and in many passages of his 1891 novel, The Picture of Dorian Gray.

While the book was called “indecent and immoral,” Wilde insisted that books are either well written or badly written and that there is no such thing as a moral or immoral book. He maintains this as his view on art throughout his life.

Queensbury wins the case; the libel charge fails. Now Wilde’s solicitor and others urge him to leave the country to avoid being charged by the Crown with gross indecency. At this point and throughout the rest of the play, Wilde refuses to flee.

Pastor’s simple staging and Jeremiah Barr’s bare-bones set design enable the actors to slip easily between characters and note the documentary sources of material quoted. Most of the actors do well at maintaining their accents, assisted by Catherine Gillespie’s dialect coaching. Uriel Gomez’ costumes serve their unisex nature well, including the creative use of safety pins for decoration as well as fasteners.

Gross Indecency was originally staged in Chicago in 1998 at Court Theatre, where I saw it for the first time.

The UK gross indecency law was in force until 1967 and was used against many gay men including Alan Turing, the World War II mathematician and codebreaker, whose life is dramatized in the 2014 film, The Imitation Game. Turing’s sentence was chemical castration as an alternative to prison.

In the US, anti-gay laws were state by state and generally called sodomy laws, criminalizing sexual activity between same-sex partners (and some kinds of sexual activity between opposite-sex partners). These laws were in effect through the 1960s and, in many states, into the 21st century. Illinois was the first state to repeal its sodomy law in 1961. (Occasionally we do something right.) The SCOTUS decision in Lawrence v Texas in 2003 resulted in anti-sodomy laws being declared unconstitutional in several states.