Marriage of Figaro at the Metropolltan Opera

The Help Strikes Back 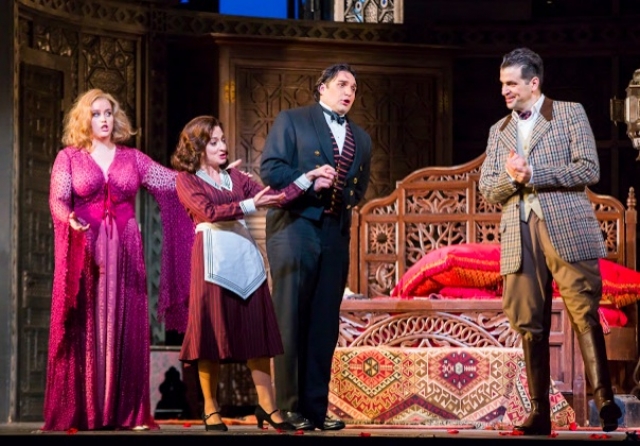 To start with, this revival is lead not by music director emeritus James Levine but by Harry Bicket. Mr. Bicket is an English conductor who specializes in the kind of high-energy period performance that led to the way Mozart was played, sung and heard in the composer's own day. Tempos are taut and sprung, and clarity is the watchword, both in accompanying the singers and in the instrumental textures. The Met players in the pit seemed to respond to this approach, and they gave a thoughtful and fizzing account of the famous overture and the four-hour score that followed.

The conductor's command was particularly evident in the big comic ensembles. Veterans of this opera know the gag with Cherubino hiding behind the furniture, the long Act II finale that builds for almost twenty minutes with no breaks in the music and the recognition scene just before the wedding itself. However, it was in the quietest moments of this opera: "Sull'aria," "Deh vieni, non tardar" and the Count's "Contessa, perdono" that the sincerity and simplicity of Mozart's gifts came to the fore.

The production boasts a strong cast, with the only returnee being Luca Pisaroni as the Count Almaviva. His performance showed some of the connective sinew between this philandering nobleman and Mozart's next great creation Don Giovanni. As his opposite number, Adam Plachetka towered above the other members of the cast. The big baritone used his physical and vocal gifts with cheerful abandon, reminding one a bit of a younger Bryn Terfel.

Rachel Willis-Sørensen also cut an imposing figure. As the Countess, she sang her two arias as literal showstoppers: audience members (including this reviewer) could barely breathe during "Porgi, Amor" and "Dove sono." In the key role of Susanna, Figaro's intended and one of the longest parts in any opera, newcomer Christiane Karg proved a pert and energetic presence. She brought warmth to this bustling, buzzing role, something that was seriously lacking in the first run of this production.

As Cherubino, the perpetually cross-dressing costume-switching young (male) page, mezzo Serena Malfi proved an inspired choice. They handled the physical business, the costume changes and the gender complexity of this part but sang their arias with charm and delicate control. Maurizio Muraro is still an inspired Bartolo, and Katerina Lesson made an imposing and robust Maddalena.  Tenor Robert MacPherson provided support and comic commentary as the oily Don Basilo and Scott Scully sung the minor role of Don Curzio. The Met chorus in their two brief appearances were their usual, reliable selves.

Despite the excellence of cast and conductor, this is still not a very good production of The Marriage of Figaro.The action takes place in an enormous revolving onstage house, eerily reminiscent of the company's 1980s staging of The Barber of Seville. The rotating sets give the actors very little room to work and less to move, confining the comedy to the shallow angles that are loved only by Peter Gelb’s Live in HD cameras. Only in the last act (set around the spiral staircase to nowhere in the middle of the gardens) does the cast find room to maneuver and engage. In the end though, this remains The Marriage of Figaro and even the most misguided staging is not enough to sink Mozart's genius. (Reprinted courtesy of Superconductor).