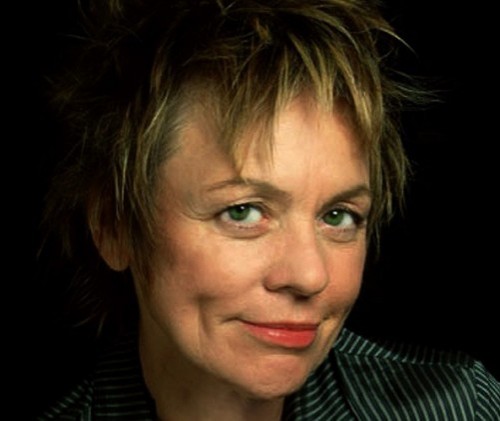 Musician and performance artist Laurie Anderson will be in residence creating a new work with a talk on January 16. 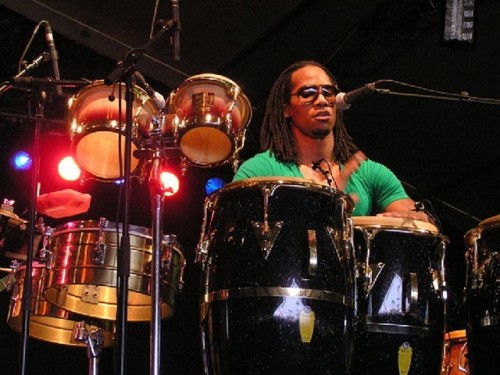 Following the Free Day on February 13 there will be a salsa dance party that night. 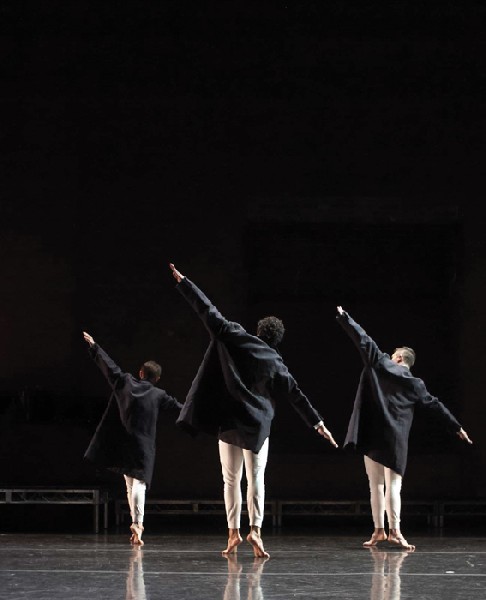 The annual collaboration with Jacob’s Pillow will feature the Stephen Petronia Dance Company on April 9 and 10. 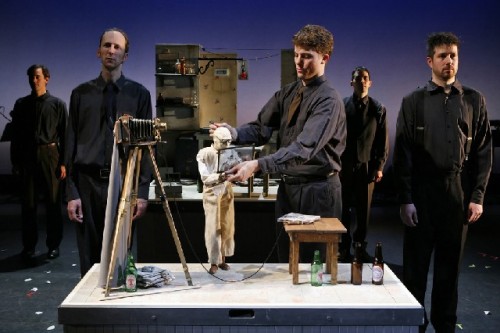 Dan Hurlin will use puppets in "Disfarmer" on May 8 and 9. 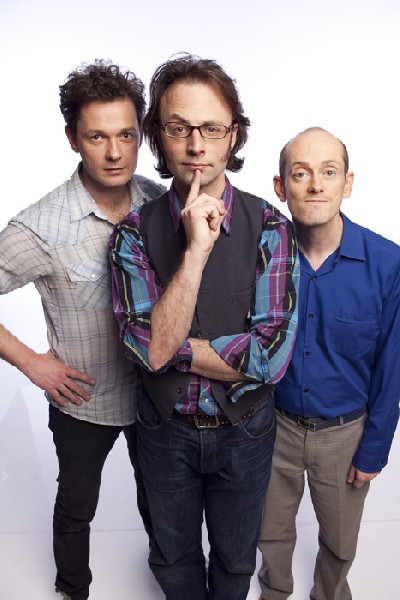 The Australian trio Tripon performs and opera on January 30. 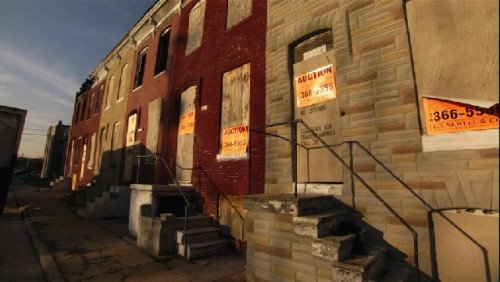 Yesterday we attended the biannual staff and media presentation of highlights of the coming Winter/ Spring season of performances, films and exhibitions at Mass MoCA. We were served cookies and beverages as Joe Thompson, the director of the museum, introduced the hour long event. The curators provided details. He extended a warm welcome and thanks to dedicated workers and volunteers.

The installation crew, headed by Richard Criddle, was particularly relieved to take a break after an intense two weeks of working with the artist Inigo Manglano-Ovalle

After the event we chatted with Criddle and his right hand man, Jason, about the complexities of the task. They were told by the artist not to reveal any of the trade secrets of the project to create an upside down version at a reduced scale of the 1951 design by Mies van de Rohe of a glass house.

They agreed in describing Inigo as one of the most precise and organized artists they had ever worked with. He was intensely involved in the minutest details of the project.

But I conveyed Astrid's comment that the cell phone should have been installed upside down to be consistent with the house. They chimed in simultaneously that "It is." But that they had to hack into a program to reconfigure the small image during the cell phone calls so it would be right side up for viewers.

It is indicative to the attention to detail for Mass MoCA projects and why artists are so eager to work with the museum. Little of that is revealed to the general public which just assumes as a norm that a house is upside down or that cars just leap through the space of the vast Building Five.. They have little sense of the challenges involved.

Several months ago we reported on a back stage tour with  Criddle of his shop and a slide show of some of his projects. Let's hope that one day he writes a book about his adventures. It would surely be a page turner.

Thompson, for example, told us that Laurie Anderson will return to the museum for a residency in which she is developing a new work. It will be presented during the Spring semester at the '62 Center of Williams College before she takes it on the road. Later Katherine Myers, director of marketing, elaborated that it had occurred on short notice. As a part of the deal the musician and performance artist will offer a dialogue, at 4 pm on January 16. We were advised to attend the talk, take a dinner break, and return for the Alt Café that evening.

Actually there is a lot to keep us busy during the dead of winter and into the Spring. The full release and schedule is posted below. So get out that brand new 2010 calendar and start marking in the dates. God bless you Tiny Tim. And Mass MoCA too.
MASS MoCA's Winter/Spring season will include performances by internationally renowned American artists like Stephen Petronio Dance Company, Grace Potter & the Nocturnals, Laurie Anderson, puppeteer Dan Hurlin, as well as three series:  Work-in-progress showings, Alt Cabaret, and Lie, Cheat, Steal, & Fake It Documentary Film Series. In the galleries the new exhibition Material World will open April 24 featuring newly commissioned work by 6 artists.

Legendary performer Laurie Anderson returns to MASS MoCA on January 16 for an intimate conversation about her current projects. February's highlight will be MASS MoCA's annual Free Day capped off by an Afro Cuban Hip Hop Dance Party with Pedrito Martinez.  FREE Day will be chockfull of tours, demonstrations, and activities for children and adults in the galleries and in Kidspace from 11 AM until 8 PM.  Doors open at 7 for the dance party (dinner is available from Lickety Split) and the party starts at 8 PM with dance instruction arranged by Jacob's Pillow. Pedrito Martinez gets the party rolling at 8:30.  Kids under 12 are admitted free to the dance party.

The spring season wraps up with two performances of Dan Hurlin's Disfarmer on May 8 and 9, a remarkable theatrical piece based on the life and work of American portrait photographer Mike Disfarmer (18840- 1959).  Using "tabletop" puppetry, projections of Disfarmer's photographs and images and a haunting score Hurlin illuminated the contradictions in the life of this American hermit and portrait artist.

Material World, opening April 24, is a group exhibition featuring the work of six artists who will use surprisingly humble materials - paper, plastic, rope, and rubber -- to transform the museum's second and third floor galleries into a series of visual, spatial, and sometimes tactile experiences.  Invisible: Art at the Edge of Perception, an exhibition which will invite viewers into a deeper act of looking will open in MASS MoCA's Prints & Drawings Gallery on  February 13, 2010.

A hallmark of MASS MoCA's performance offerings, the work-in-progress series includes three residencies capped by three showings this season.  The first residency, with the wildly popular Australian trio Tripod, will culminate on January 30 in the world premiere of a fully realized production of their playful opera Tripod Versus the Dragon which is based on the game Dungeons & Dragons.  On February 6, visitors can see a performance of The Waypoint, a new play written by Iris Dautmeyer, directed by Sara Katzoff with soundscore by Peter Wise, slated for performance in 2010 at the Berkshire Fringe Festival.  On March 6 Phantom Limb Productions, an exciting young puppet theater company, will give MASS MoCA audiences a first look at 69° South: The Shackleton Project after their two week residency.

The Thursday night Cinema Lounge series this season is Lie, Cheat, Steal & Fake It, documentary films about the modern moral compass.  All films are screened in Club B-10 with introductions and post-film discussions moderated by Williams College professor Shawn Rosenheim.  The series starts on January 21 with American Casino about the subprime lending scandal and continues on February 11 with Yes Men Fix the World, a screwball true story about two gonzo political activists. On March 25 MASS MoCA screens Fraude: Mexico 2006 about the most recent presidential election in Mexico and the series closes with Orgasm, Inc on April 29.

In addition to the doc series, MASS MoCA will present a full weekend of soccer films and activities on April 23 and 24. The series titled Kicking and Screening is timed to coincide with the World Cup and features films for families during the day, additional soccer films both nights, a soccer juggling team, and a panel discussion with professional soccer players and league officials.

Tickets for all events are available at Mass MoCA

or by calling 413 MoCA111.  The galleries will stay open until 7:30 PM before Saturday night events.  Full bar and dinner and snacks from Lickety Split are available before and during the show.

Tickets are available through the MASS MoCA Box Office located off Marshall Street in North Adams, open from 11 A.M. until 5 P.M., closed Tuesdays.  Tickets can also be charged by phone by calling 413.662.2111 during Box Office hours or purchased on line at Mass MoCA