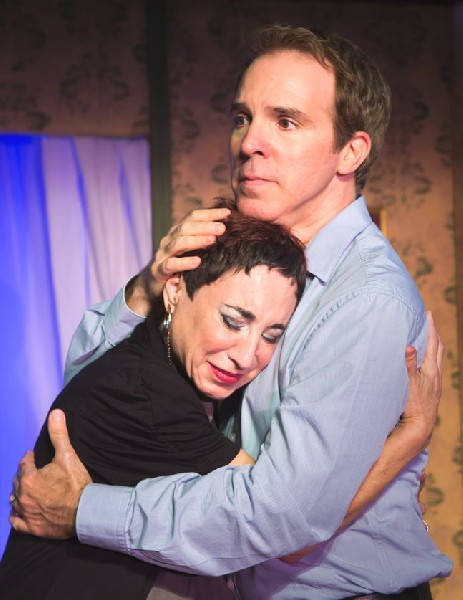 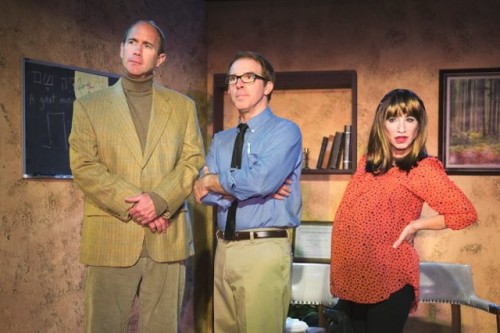 “Exquisite Potential” by playwright Stephan Kaplan, recently had its West Coast Premiere at Dezart Performs in the Pearl McManus Theatre in Palm Springs.   The comedy drama is one of two plays that ended in a tie as “audience favorite” from Dezart Performs annual staged play reading festival in April of this year.  The winner receives a fully produced production (set, light, costumes, props, sound, etc.) in the Fall of each year following the April Festival.

The Kaplan play was presented on the Pearl McManus stage at the Palm Springs Women’s Club.

But, now back to “Exquisite Potential” directed by Joan McGillis.  It’s a clever, funny, two-act, light comedy/drama, with religious overtones about an ordinary New York City Jewish family where the husband Alan Zuckerman (Michael Shaw) believes his three-year old son David is the Messiah.  The mother Laura (Adina Lawson) definitely does not.  What’s a family to do in this dilemma?  Why consult Rabbi Gary Gerber (Scott Smith) for answers and guidance, of course.  Between these three characters in Act One we get a quick overview of the Old Testament, sprinkled with a lot of ethnic humor, clever dialogue, and food for thought on tolerance and diversity.  The three adults agree to remain silent concerning David; allowing the boy to grow up and have a normal childhood and forget all about this Messiah thing.

In Act Two the play switches gears.   It’s thirty years later.  David (played by Shaw) is now a worldwide TV celebrity.  He’s gay, married, with a son Emmet (an adorable six-year-old Makai Armstrong Ross) to David Gerber, son of his father’s old friend, Rabbi Gary Gerber.  Rabbi Gary Gerber – now in his sixties – is wonderfully played by Garnett Smith.  There are twists and turns in the second act that need to be seen and heard by an audience in a theatre, not in a review.  No spoiler alert here (accept for a bunch of f-bombs hurled from the stage every now and then).

The cast is uniformly solid, but the showier parts give a frustrated, but resigned to his fate, Michael Shaw the lion’s share of the humor and to his foil Garnett Smith as the elder Rabbi.  Adina Lawson as the wife and playing her daughter Beth in Act Two has some nice comedy moments.  Scott Smith as the young Rabbi and as David’s husband nicely juggles his two roles.