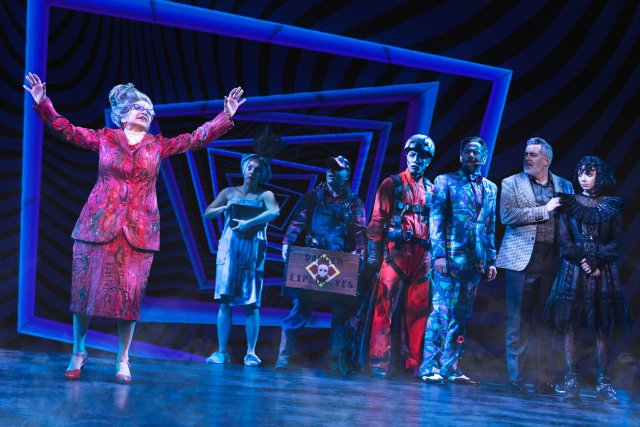 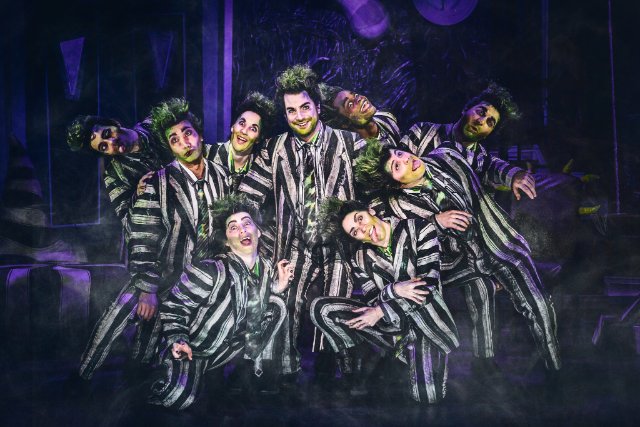 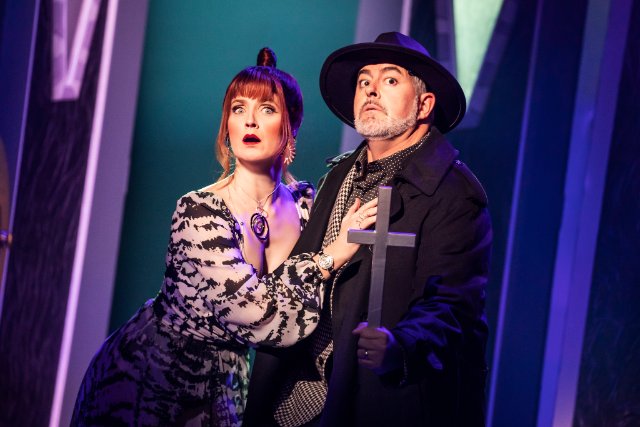 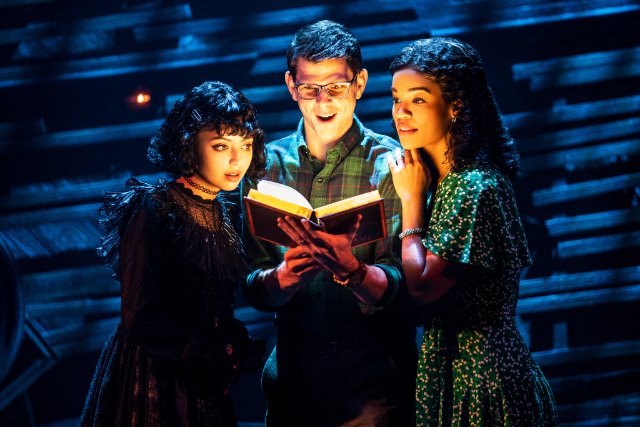 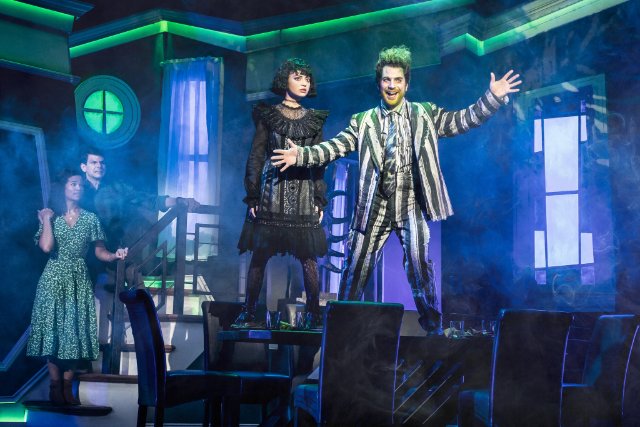 Ghosts.  Dancing skeletons.  A giant toothy snake from Hell, like Saturday Night Live’s land shark on steroids. “The Handbook for the Recently Deceased.”  When the title character mirthfully tells the audience that this is a play about death, he’s not kidding.  Fortunately, it’s all in good fun, and there is plenty of it in this delightfully camp musical adaptation of the highly successful 1988 comedy-horror film.

For those hoping for a repeat experience of the film, fear not.  Minor details are changed.  The owners of the creepy Connecticut country home die from electrocution rather than a car accident (easier to stage), and the interior decorator becomes a real estate investor, but macht nichts.  All the essential features remain, down to the hilarious use of retro calypso songs popularized by Harry Belafonte, “Day-O (The Banana Boat Song)” and “Jump in Line (Shake Senora).”

The premise is that after their deaths, Adam and Barbara want to keep their home for themselves, but it has been purchased by real estate developer Charles.  He moves in, accompanied by his gloomy Goth daughter, Lydia, who mourns for her deceased mother, and the ditsy Delia, whom Charles hired as a life coach for Lydia.  Delia also happens to be Charles’s mistress, and Lydia doesn’t like her at all.

Enter Beetlejuice, a demon from the Netherworld who conspires to re-enter the world of the living, using Delia, Adam, and Barbara to help him.  Meanwhile, these three become willing accomplices, relying on Beetlejuice’s Netherworldly skills to get Charles to abandon the house.

The success of the play hinges on a sensational performance by the actor playing Beetlejuice, and Justin Collette succeeds in spades.  Looking like a dirty, deranged convict in oversized clothes; with the wild gesticulations of a marionette gone mad; and the sandpaper voice of Harvey Fierstein, Collette is hysterical.  His lasciviousness is limitless (beware if you are offended by an abundance of X-rated profanity).  He supplicates and bamboozles to accomplish his goals, and his frequent breaking of the fourth wall yields great connection with the audience.

The rest of the cast is totally professional, as expected from a Broadway touring show, but two performers stand out.  Isabella Esler, who happens to be from San Jose, plays in her first ever professional performance, and remarkably, in a lead role.  She captures Lydia’s darkness nicely.  Interestingly, though dressed in black with all of the Goth trimmings, her makeup looks more ingenue, which allows for a more sympathetic characterization and the ray of hope in her personality.  She also displays a strong and versatile singing voice.

The general storyline is a proven entity, and it works in this format.  With virtually nonstop schtick, no dead spots slow the action, but conversely deeper feelings about the characters or situations don’t have a chance to develop.  Several vignettes may seem superfluous, like the Miss Argentina from the Netherworld; the Girl Scout who has come to sell cookies; the game show with the team of skeletons; and the multiplying Beetlejuices, but each works as entertainment that fits the ghoulish theme.  Other diversions include metatheatrical references and a good chunk of social commentary that resonates with the audience. The catchy music contains lyrics that almost always reveal and propel the narrative.

The rest of the creative side works in exemplary fashion.  Despite the many shifting venues required, the sets are appealing and convincing and the changes handled with dispatch, usually while brief scenes occur in front of the curtain.  Diverse costumery sparkles, and choreography is brisk.  Come one, come all, and if you want to be in the in crowd, don’t be afraid to dress in black and white stripes.

“Beetlejuice” with music and lyrics by Eddie Perfect, book by Scott Brown and Anthony King, and based on the movie of the same name, is presented by SF Broadway and performed at the Golden Gate Theater, 1 Taylor Street, San Francisco, CA through December 31, 2022.