The Secret Garden in South Florida 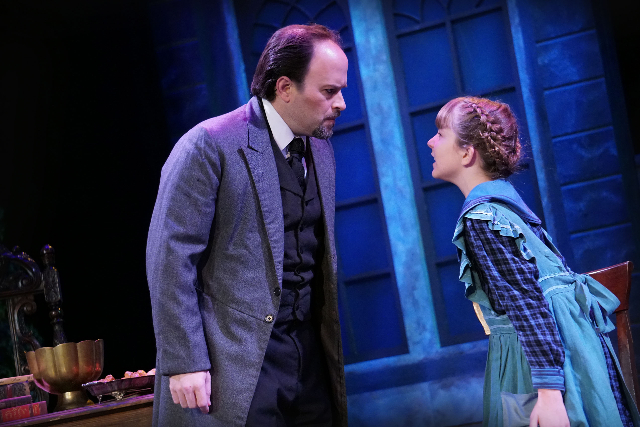 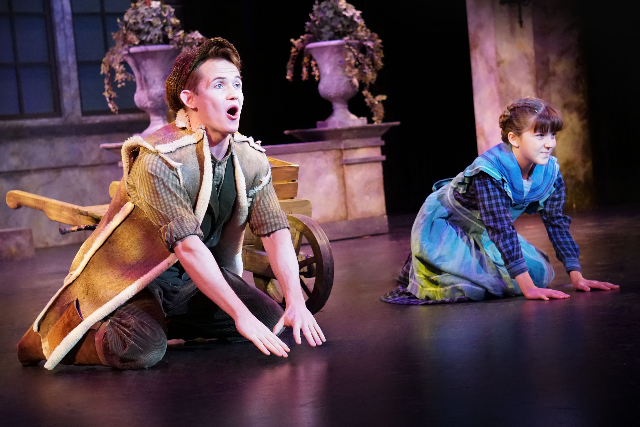 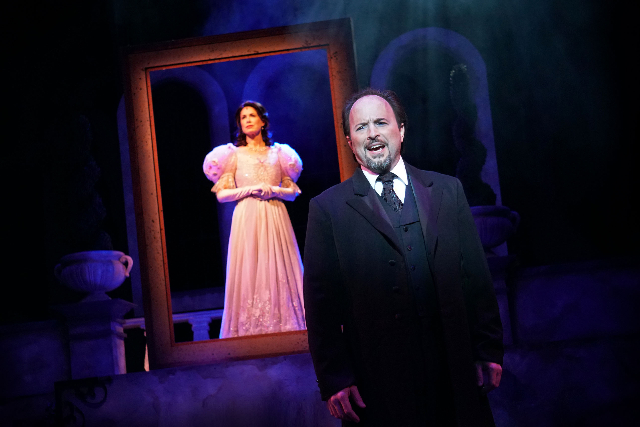 In 1991, at age 12, Daisy Eagan became the youngest actress ever to win a Tony Award.

She received the honor for her performance on Broadway in the lead role of Mary Lennox in the award-winning musical The Secret Garden.

Flash forward 26 years, to today. Alexa Lasanta, no doubt a blossoming star at age 11, is giving an award-worthy performance of her own in the same role in South Florida.

The youngster headlines an impressive cast in the multi-award-winning Slow Burn Theatre Company’s enthralling production of the Broadway version of the aforementioned musical. The show, set in early 20th century Yorkshire, England, runs through Dec. 31 in Broward Center for the Performing Arts’ 590-seat Amaturo Theater.

Alexa is giving a rare performance for an actress so young. It never feels forced, always seems in the moment and authentically conveys the many emotions her character experiences. The young performer seamlessly transitions from one to another. Whether her Mary is petulant, loud and obstinate, conveying tough love toward her young cousin, Colin Craven, or radiating warmth, eagerness and curiosity, we never sense a false emotion, word, lyric, action or gesture. Furthermore, Alexa displays the necessary stamina. It’s required to disappear into a demanding role for two-plus hours.

Sometimes, when Alexa’s Mary speaks loudly, it’s hard to understand exactly what she’s saying. However, the performance seems so real that the emotions running through Mary are palpable.

The Secret Garden, which opened on Broadway in 1991 and ran for 709 performances, is not an easy musical to stage. With its non-realism, metaphors and symbols, it can be easy to drown out the humanity of the piece. The tendency can lie in overdoing lighting effects and scenery. Fortunately, in Slow Burn’s production, the humanity of the show shines through. It does so like a bright sun feeding a garden’s flowers its necessary light.

Darkness and light create a marked contrast in the musical. It is based on the 1911 children’s classic novel by Frances Hodgson Burnett. Lighting designer Thomas M. Shorrock and scenic designer Michael McClain have done an impressive job in creating this contrast of auras. The design work, including Costume World Theatrical’s character-appropriate period costumes, serves the production without dominating it.

In just one example of how this production’s elements meld into a unifying whole, what resemble picture frames seemingly magically ascend and descend from the ceiling. During one such occurrence, ghosts circle one of the characters who is in a dream state. It all reinforces the dark, mysterious and haunting aspect of the tale.

McClain’s depiction of the garden suggests a sense of rebirth and renewal, reinforcing the joyfulness the characters feel toward the end. Shorrock’s lighting design, which include diagonal shafts of light and a varied color palette, help create appropriate moods. They often assume an otherworldly aura, which is appropriate for this haunting, Dickensian tale.

Ghosts populate the faithful, dark musical adaptation of Burnett’s lighter novel, symbolizing the past. It’s a past to which long-mourning widower Archibald Craven is strongly clutching. He is a lonely, haunted, sad man. He, and his supposedly sick and crippled young son, Colin, are wilting under the weight of their troubles. They’re like sustenance-starved flowers in desperate need of nourishment.

For Archibald, who lost his wife many years ago, that strength must come in the form of letting go and moving on.

Releasing oneself from memories of a past that, after so long, still feels as tangible as if it were yesterday is a major theme. Ironically, by clinging so strongly to the past, Archibald is also neglecting it. By locking up his late wife Lilly’s mysterious, magical garden (for Archibald, it’s too painful a reminder of her, just as his son is), he’s allowing the garden’s contents to wither. Similarly, by neglecting to show affection for Colin, he’s allowing the boy’s spirits to sink under the smothering “care” of Archibald’s physician brother, Dr. Neville Craven.

The provider, who may have ill, ulterior motives, has convinced the pre-teen that he’s gravely sick. The boy, according to Neville, has a deformed back, like his mildly-hunchbacked father. The doctor also says the bed- and wheelchair-bound youth has some unnamed condition, which renders him crippled and frail.

But one of the show’s biggest themes is what many feel are nature’s healing powers.

Just as the neglected garden comes to life with the help of Mary and her friend, Dickon, the characters spring to bright, vibrant life.

Those characters include Mary. She begins as an ill-tempered child full of feelings of entitlement. She grows into a warm, sweet, curious and joyful youngster, much like Colin. The children’s relationship also flowers as the musical progresses. Mary, like Dickon, becomes the “nectar” for Colin to think positive. The hope is that he’ll ignore the doctor’s suggestions that he is infirm.

One of the production’s more emotionally-touching and then emotionally-charged moments occur when Mary is trying to encourage Colin. At times, she firmly, even sternly, tells him that he’s not ailing. But in one scene, the two are huddled in his bed. Mary seems to be succeeding mightily at calming Colin.

We can’t help but feel warm-hearted and moved by the closeness between the two: the cousins have become like siblings. Serenity and contentment register on their faces. Suddenly, in barges Archibald’s strict housekeeper, Mrs. Medlock (a harsh, stern Aaron Bower), the doctor and others. Mary is not to see Colin any longer or get close to him, they tell her in no uncertain terms. Our focus quickly shifts toward the adults. They’re like harmful pesticides poised to stymie the growth of this relationship in bloom.

The most poisonous is the doctor, played forcefully by Matthew Korinko. He drips venom directed at Colin. Disgust and hatred ooze from his facial expressions and voice. These emotions are directed not just at the lad, but somewhat at his brother. He won’t stand Archibald’s conflicted state and dreams.

The entire cast, which is blessed with mostly impressive voices, sings with flair composer Lucy Simon’s sometimes haunting, sometimes upbeat, sometimes yearning songs and Marsha Norman’s descriptive lyrics. A strong, live orchestra, whose members we don’t see, back the performers. It’s fitting that the musicians are hidden; this is a show with ghosts, after all.

Elizabeth Sackett, who plays a comforting Lily as a spirit, sings a caressing, beckoning “Come to My Garden.” Its melody carries an aura of otherworldliness and comfort. The number is one of the musical’s most touching songs. It might moisten your eyes.

Michael Ursua, as Archibald, could strengthen his performance by breaking down when his character utters one of the show’s most touching lines. Toward the end, he kneels by Colin, asking his son to forgive him for neglecting him all these years.

Otherwise, Ursua endows Archibald with an appropriately gloomy countenance. He also brings out the character’s soft spot and sense of being torn between past, present and future. Ursua makes Archibald a sympathetic character, avoiding the trap of making him bitter, mean and dismissive like his brother.

Christo no doubt will melt hearts with his sweet, but not overly cute countenance. Just try not to fear for Colin’s safety as the small boy struggles mightily and convincingly in the garden to stand up from his wheelchair, his legs unsteady. Still, he persists and walks with effort. Tears will further roll down your cheeks when, at the end, the brightly smiling boy moves, even runs, just like any kid his age. He even exhibits a bit of mischief.

Dickon has no problems moving. Kyle Kemph imbues him with optimism, energy and artfulness (think the Artful Dodger in Oliver!).

His sister, Martha, who serves as the maid at Archibald’s oversized mansion, is almost as peppy. Anne Chamberlain gives her a cheery personality. Equally as important, she conveys an indomitability that helps Mary navigate tough times. Martha is Mary’s rock, especially at the end.

Director/choreographer Patrick Fitzwater finds the right mix of humor and pathos. His staging is also top-notch. Particularly impressive are the ghosts, who serve as a Greek chorus, commenting on the action. They also rapidly circle dreaming characters. Such movement suggests a dizzying subconscious mind at work when, for example, Mary dreams about her youth and how people called her “Mistress Mary, quite contrary.” The chant builds in speed to a frenzy, mirroring a bad dream growing into a nightmare.

Ritualistic dances in the garden create a sense of serenity and that something magical is happening.

The Secret Garden may have started as a children’s novel, but this musical also places more emphasis on the adults and weightier topics.

Adults and children will relate to something in this enchanting, haunting, heartfelt and altogether satisfying musical.