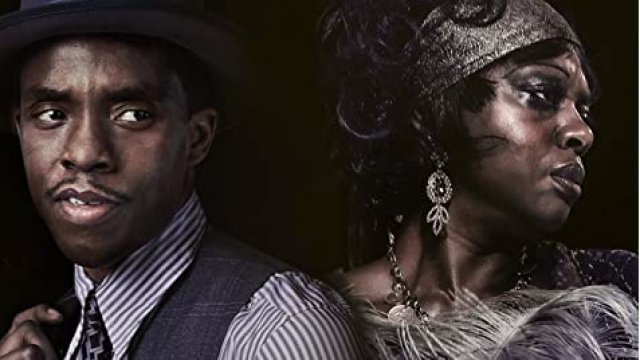 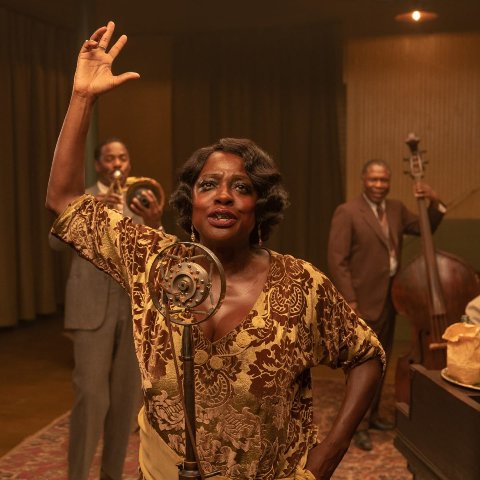 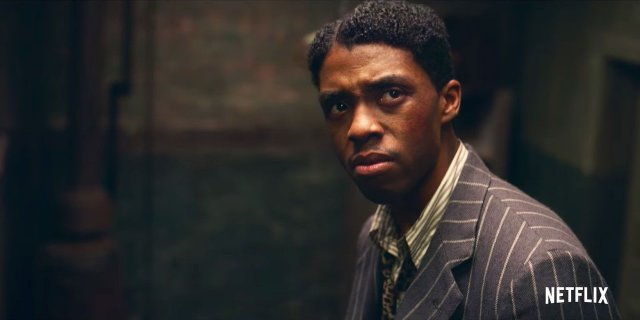 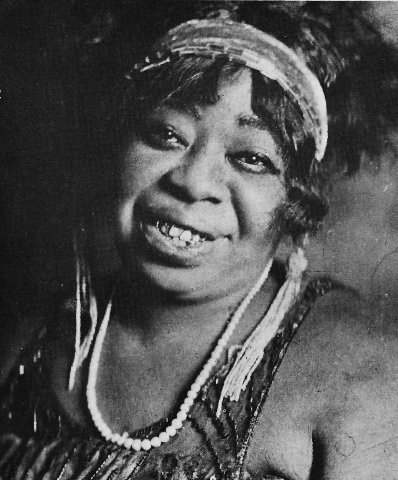 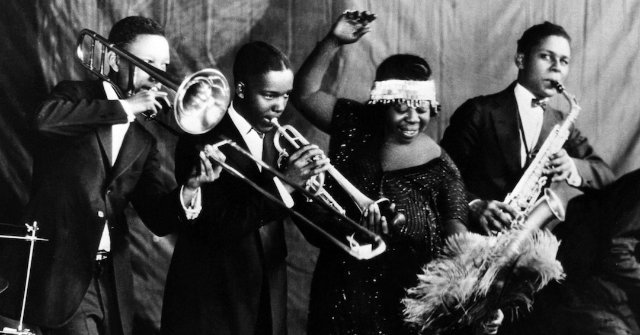 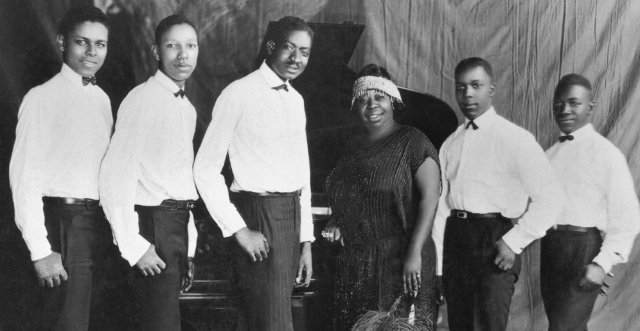 Ma with her band.

Some years ago we saw a production of the August Wilson 1982 play “Ma Rainey's Black Bottom”at the Huntington Theatre. Unlike the other works in his Century Cycle it was not set in Pittsburgh. Another difference was its framing around an historic figure the seminal blues singer Gertrude Ma Rainey (born Gertrude Pridgett, April 26, 1886 – December 22, 1939).

While Wilson wrote a play about a legendary singer he opted not to create a musical. Rather it’s a tense, finely-crafted drama about the circumstances of a recording session in Chicago in 1927. In theaters the staging is compressed into the rehearsal space and studio of Paramount Records.

By 1927 recording technology had improved somewhat with electronic microphones. Enough so to allow for picking up the bass. The original bands were limited to tuba and banjo while drummers primarily used the snare. Musicians huddled around a large cone that ended with a needle that "cut" a cylinder and later disc of wax. It was the ultimate analog approach to recording sound.

A star of the 1920s, Ma Rainey made some 100 recordings for Paramount which produced race records, or records for the race. They were marketed at a cheaper price in stores and barber shops in black communities.

As a part of social commentary, in Wilson’s revelation, we learn that artists were paid for the session and signed over the rights. The recordings, however, promoted their work and helped to draw audiences to live performances. Typically, audiences wanted to hear the “hits” they had heard like “See See Rider” Rainey's signature tune recorded in 1924 with Louis Armstrong (1901-1971).

The market for race records occurred somewhat serendipitously when the vaudeville star, Sophie Tucker “Last of the Red Hot Mamas,” failed to show up for a session. Not to waste studio time there was a scramble to find someone to fill the slot. That proved to me Mamie Smith and the record that day in 1920 was the hit “Going Crazy With the Blues.”

When numerous other women recorded Mamie soon faded. The range of style of these early female artists was at best eclectic. Many performed in the vaudeville circuit, and even when accompanied by Satchmo, there wasn’t always much blues or jazz flavor. What’s most interesting about that considerable body of work are the early riffs of Armstrong then in his 20s. Critics have largely ignored those recordings as gigs or session work. Critics, like biographer Terry Teachout, focus on his early recordings with King Oliver or his legendary Hot Five and Hot Seven sessions.

The era of the blues ladies was relatively brief. It was then popular music though now regarded as an art form. Taste changed and demanded a different style and approach. The music and instrumentation grew ever more sophisticated as jazz progressed. By the 1930s, "hot five" combos morphed into big bands and swing.

Wilson makes that transition palpable in the talented cornet player, Levee, in the riveting final performance of Chadwick Boseman. During the rehearsal for the session, he chafes at the old fashioned “Jug Band” arrangements. He has written a new arrangement for the paradigmatic “Ma Rainey’s Black Bottom” which features a virtuoso flourishing intro before the band kicks in.

He argues that the new urban black audience will respond to this updated and more sophisticated approach. The band leader won't have it and insists that they will play as Rainey expects and demands. They are hired to back her not to create new waves. Levee is intent on forming his own band to play the new more progressive music. That this doesn't happen is the grist of Wilson's drama.

In a subtle manner, no doubt lost on the vast Netflix audience, Wilson is commenting on aesthetic repercussions of massive migrations of blacks attracted to jobs and a better life in the big cities of Detroit, Chicago, and New York’s Harlem.

Henry Ford offered the then seductive salary of a dollar a day or “white man’s pay.” That was an attractive alternative to the indentured life of a share cropper in the Jim Crow, Deep South.

With that migration the music changed. The delta blues players, male singers accompanying themselves on guitar or in small combos, had earned their living through constant travel. They performed in the street for change, at bars on Saturday night, on back porches and for barbecues.

There are seminal acoustic recordings (1941-42) of Muddy Waters then a sharecropper on Stovall’s Plantation in Mississippi. In Chicago, Muddy went electric with the voltage to entertain larger audiences and overcome the din of performing in raucous bars. He recorded for the legendary Chess Records.  That new style, with a soupcon of Robert Johnson who flirted with but didn’t like the sound of electric guitar, in the 1960s would inspire the British Invasion of blues infused rock.

The Wilson play is a tragedy and rightly so. Perhaps a bit amped up in the strident acting out of Levee culminating in a catastrophic and riveting climax. While that works dramatically, the true story of Ma Rainey and dimming of her star was more of a slow burn. That’s a quibble but Wilson wrote a play and not a documentary. His historical insights, however, were uncanny. Combined with the raw language of the dialogue, he provides an authenticity to the zeitgeist of emerging and embattled black culture in the belly of the beast of systemic racism.

There is the frequent comment that ‘the white man stole our music.’ Here Wilson provides a compelling case history. At the end of the session Rainey got $200 and the side musicians some $25 each. In a horrific scene, the producer takes the sheet music “off the hands” of the brutalized Levee for some $5 a song. In the final scene, after the subsequent meltdown of Levee, we see the producer recording those songs with a watered down, corny, white big band. The white sweet bands, that were enormously popular, were creating a grim parody of black music

The brilliant Fletcher Henderson, who had limited commercial success, provided the book and arrangements for the superstar Benny Goodman “The King of Swing.”

When Paramount folded as the fad subsided, those hundred Rainey recordings went “out of print.” They were later reissued on LP with some remastering but are still difficult to listen to. We get only a glimmer of the real power of Ma Rainey.

In that regard, the legacy of her protégée, and possible lover, Bessie Smith fared better. She recorded for Okeh Records, which also recorded Armstrong’s Hot Five and Hot Seven. The catalogue was acquired by Columbia Records.

The Columbia producer George Avakian was the first to see the potential of recording jazz on LPs. He was a fan of early jazz or "trad." As was another Columbia associate, John Hammond. He found Bessie Smith, then down on her luck,  and produced her last recording session in 1933. In 1929 her blues anthem “Nobody Knows You When You’re Down and Out” foretold the pending Great Depression.

Smith died as the result of an automobile accident September 26, 1937 in Clarksdale, Mississippi. The circumstances of her death, and rejection of treatment by the nearest white only hospital, became the 1959 play “Death of Bessie Smith” by Edward Albee.

Expanding Wilson's play to a movie released by Netflix allowed writer Ruben Santiago-Hudson and director George C. Wolfe an opportunity for creative liberties while remaining faithful to the intent of Wilson.

Taking advantage of cinema their version opens with Ma Rainey performing to an enthusiastic rural audience in a tent. Viola Davis, a remarkable artist, has one of her finest performances as the legendary blues singer. Based on vintage images, she is made up grotesquely with thick greasy cosmetics and sweats profusely. She is bulked to resemble the hefty blues singer.

Technically, the style of Rainey was more about raucous, raunchy, down and dirty delivery than complex vocal pyrotechnics. Her legacy is more about feeling than style. That would develop later with the jazz singers from Billie Holiday to Ella Fitzgerald. Rainey’s delivery is well within the range of Davis who beats the hell out of several snippets of songs. It is unlikely that any actress will compete with her rendering of the seminal blues singer. Her performance is a voodoo, mojo-inflected seance of the soul and spirit of Ma Rainey.

Most importantly, the beginning of the film allows for the context of Rainey as a star of the rural circuit of Theater Owners Booking Agency (TOBA). The acronym was better known to the performers as Tough on Black Asses.

Further cinematic liberties allow us to experience Rainey as a diva chauffeured about Chicago accompanied by her nephew and her lover. There was an incident in Chicago when she was arrested for having sex with women dancers in her act. Legend has it that she was bailed out by Bessie Smith.

When Ma eventually enters the recording studio, confined to that space, the film most accurately conforms to the staging of Wilson's play. The sense is claustrophobic and stifling. She demands a fan and we, as viewers, require ventilation through the compressed action and intense dialogue. We get some breathing room through mobile use of the camera. The director, George C. Wolfe, pulls back to view the interaction of the band and at times pull in for intense closeups. Cinematic technique allows for greater impact of the story arc and its highlights. This is further enhanced by sound design and the more contemporary score of Branford Marsalis. His incongruous instrumentation is strikingly different from Rainey's simple "jug band" arrangements.

The story line is that Ma is taking her sweet time showing up at the recording studio. There are sharp interactions with her groveling white manager. It’s a stifling hot day and she refuses to sing a note until she is provided with several ice-cold cokes. She knows her power and milks it for all its worth.

The irony, richly underscored by Wilson, is that she earned a pittance for her work. The white music industry continues to make money on her music and that of generations of black recording artists. Now that she is more widely know, as a result of what will surely be an award winning Netflix production, there is more money to be made.

Hopefully, that will inspire a long overdue remastering of her primitive recordings. Columbia did that with the complete work of Bessie Smith in a series of lavish, double-album releases. Arguably, Rainey is at least as important and deserving as Smith. Hopefully, the Netflix production will create a new and younger audience for her genius.

In their day Rainey, Smith, and Satchmo were popular artists. Today, they are reconfigured as cornerstones and signifiers of America’s greatest indigenous art form.

We are great beneficiaries of the vision of August Wilson the greatest American playwright of his generation. There is serendipity that, for one of his ten paradigmatic plays, he took leave of Pittsburgh for a sweltering summer day in Chicago with the colossal character of Ma Rainey.

As a master of theatre, Wilson branched out to make a statement evoking a parallel creative universe.

Previously, Denzell Washington produced and co-starred with Viola Davis in Wilson’s “Fences.” We look forward to his commitment to film the eight other Wilson plays.

Yes, the language is harsh, earthy and authentic. It should be appreciated for what it is, loud and clear. As an “American Shakespeare” the plays of Wilson should be a solid part of secondary education curriculum. It urgently needs to be taught with appropriate background and well-honed lesson plans. Wilson’s dialogue is the very earth of the black experience in America. It’s the rich soil of real life from which great art and stunning theater grew. Generations will harvest the fruit of that labor.