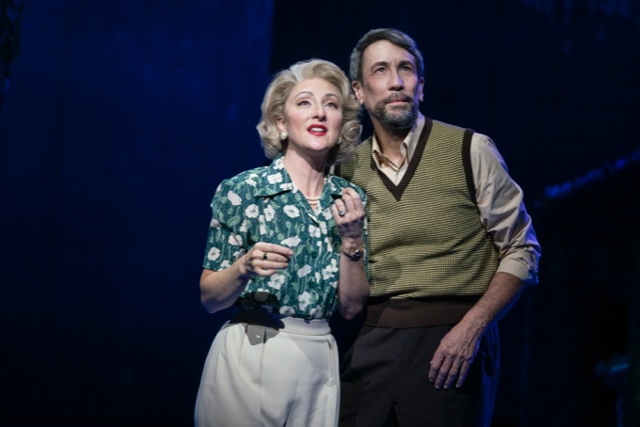 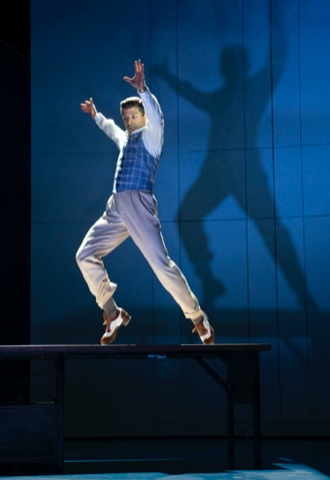 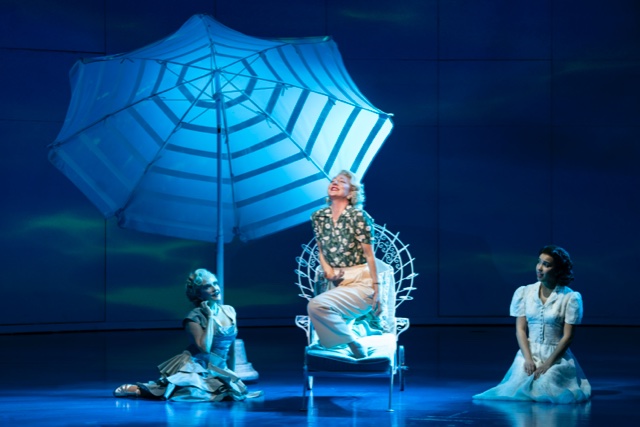 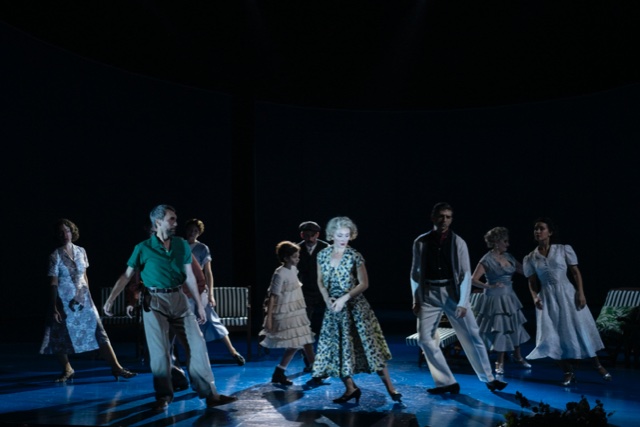 The company taps in Flying Over Sunset 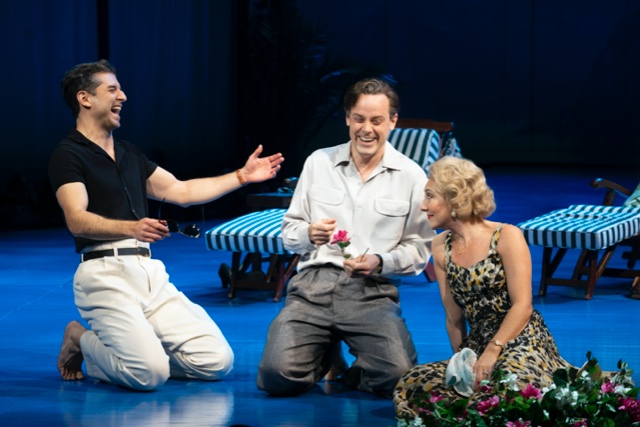 Flying Over Sunset, a new musical with book by James Lapine and music by Tom Kitt premieres at the Lincoln Center Theater. It features Aldous Huxley (Harry Hadden-Paton), Cary Grant (Tony Yazbeck) and Claire Boothe Luce (Carmen Cusack), who all experimented with LSD in the 1950s. Both Huxley and Luce wanted to expand their horizons. Grant went to a psychiatrist for a supervised dose of the drug at the recommendation of his then wife, Betsy Drake.  In Act II, they imbibe the drug together in a beach house Luce has rented in Malibu.

The characters discuss being in a bubble. The imaginative and surprising set by Beowulff Boritt is one.  A donut-shaped lighting device hovers above the stage like a space ship, containing the out-of-the-world goings on below. Curving walls from a Richard Serra-type sculpture  move to and fro.  On them lush visual images play. We are swept quickly into an otherworldly place. Who could imagine a Rexall drugstore seducing, with stacked lights on moving display cases? Aldous Huxley can’t resist them. (Neither can we). They inspire him to seek LSD.

While we all know that Cary Grant was Archie Leach (played by Atticus Ware) at the start of life and that the early boy remained close to Grant even as he zoomed to the Hollywood stratosphere, the parallel lives are exhibited at one of the show's high points in a dual tap dance.

Tapping threads through the show. When the entire cast moves across the stage, you hear nothing but the tap, tap, tapping of the toes of shoes. It’s quite wonderful.

The Malibu rented home has the feeling of a houseboat. Houseboat was the film that joined Grant with Sophia Loren. Grant and Loren together in a psychedelic dance could be Fred and Ginger (in your wildest highs). When moments that flash through the heads of the principles are physical--in dance and gesture, they work.

Clare Booth Luce is least served by the piece. She talks and has a nice song or two, but she displays none of the famous Luce wit.  She sinks into her memories, possessed by the deaths of her mother and daughter in automobile accidents. She finds her mother is in a tree hollow in heaven. The scene is literal and dull. Because Luce is central, the failure to show her acid wit and charm take the show down a notch. You yearn for husband Henry to show up, not just his swimming trunks borrowed by various male characters.

When the spotlight hits Huxley, he is mired in memories of his wife who has died.

Is the LSD experience really about memory?  Or is it about finding out who you are? Or treading new turf?

It is generally thought that you can’t write about psychedelic experience from the inside. The writing of Henri Michaux under the influence is mostly unreadable. Writing may have to be abandoned.

Yet in Flying Over Sunset the set, projections and lights do a good job of taking us out of ourselves as if we were drugged. The graphic collapses of Gerald Heard (Robert Sella), who knew Huxley and guided Luce on her trips, work well too. He writhes on the floor, contorted beyond normal extensions. A scene in which the three men are threatened by waves almost works. Here the sound is distorted to threaten.

Oddly enough, the music makes no effort whatsoever to give us a psychedelic thrill. It is hard to think that with the high caliber of artists involved, this was not considered. Yet you don’t hear even a whisper of wildness.  Instead we are reminded beat-by-beat of Lapine’s late partner, Stephen Sondheim.

The show in its current form feels like an opportunity wasted. Shortly after the time in which Flying Over Sunset takes place, Ken Kesey and the Merry Pranksters started on a bus trip teetering down the perilous coastline between Oregon and California high on LSD.

Kesey had said he was tired of waiting for an echo to his work. He wanted to be a lightning rod. He became one. Grant’s image of himself as a penile shaft in Flying had some of this feel. The characters in the musical already have celebrity and instead worry about reports of their drugging. Luce says she will take care of her friend Hedda (the gossip columnist).

Carolyn Adams, who had a daughter by Kesey and later married Jerry Garcia, was on an LSD bus trip. "For all the harsh realities – we didn't have any money, the bus was always breaking down, there was a lot of foolishness, and sometimes people would triple-dose and have a really hard time – I'd like people to recognize the unbridled, goofy joy of the times. We had a heck of a lot of fun."

It would be nice to say that Flying Over Sunset was a heck of a lot of fun. Yet it has its moments. It could use more of Koestler's Cosmic Schmaltz. Ending with a pitch for the human element, element 23 of the cocktail, is not quite enough.