The Perennial Woman in Black 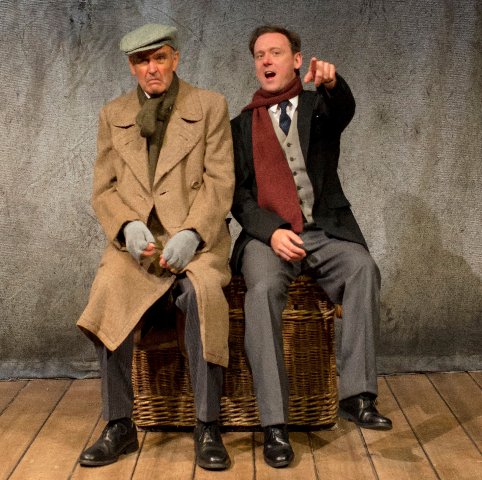 Why are people so attracted to horror in entertainment, when in real life, it is one of the last things that they would want to confront?  Perhaps that is for psychologists to explain.  However, one proof of the pudding is the play “The Woman in Black.”  Although not shock-a-minute, grim-and-gory Grand Guignol horror, the occasional unexpected scares and tingles will keep the viewer on edge, ever anticipating more.  The work has drawn sufficient audience to run on London’s West End for over 30 years – second in longevity only to Agatha Christie’s “The Mousetrap.”  It’s had productions around the world and has been translated into 14 languages.  Not bad bona fides.

More than a simple frightfest, the play is a master class in storytelling, using only two speaking actors on stage.  The conceit is quite clever.  An older gentleman named Arthur Kipps has written a tome on bizarre episodes that he experienced as a junior solicitor.  Despite a driving compulsion to exorcise his long-internalized torment by sharing it with an assemblage of family and friends, he lacks the confidence to read his manuscript before others and enlists a not-named theatrical director to train him.

In what follows, the men reenact the incidents as rehearsal for the ultimate presentation, with the Director portraying the younger Kipps, while Kipps himself provides narrative and performs the characters that he had interacted with.  The mainspring of the story is that Kipps had been dispatched by his firm in London to deal with the estate of a recently deceased widow, Mrs. Drablow.  The reclusive woman had lived on the marshy east coast of England in a dank and gloomy castle-like manor on its own island, accessible by land only at low tide (what a surprising venue for a horror story!).  Kipps’ Gothic encounters with the local community and tales unveiled from reading the papers of the deceased would live with him always.

The Director advises Kipps that when he reads the story to his gathering, he will have to draw upon their imagination to visualize the sweep of the narrative.  Indeed, the play itself calls on the viewers’ imaginations.  The single set by Michael Holt, who designed the West End production, cannot convey all of the locales in detail.  The play is full of soft humor, and much of it derives from the audience having to fill in the visual gaps.  A buggy ride is represented by the actors seated on a rattan chest and humorously bobbing in unison.  A dog is invisible, but the Director pets it, and the men’s heads and eyes follow its movement.

The unsettling disturbances come from sources other than the characters who the actors portray.  Sebastian Frost’s soundtrack resonates with sounds of nature and movement and with an occasional unexpected thunder or shriek to grab the audience’s attention.  Anshuman Bhatia’s lighting design is highly active, often with sharp contrast or total darkness to add another ominous element to the staging.  And then, of course, there is The Woman in Black.

So – fine story, set, sound, and lighting.  Appears like the only thing left for a successful production is fine acting.  It seems almost ridiculous that the elder Arthur Kipps and all of the other characters except his younger self are portrayed by Robin Herford.  Herford is diffident as Kipps; demonstrative as the head of Kipps’ law firm; a laconic rube as the buggy driver.  And by the way, he not only commissioned this adaptation in 1989 but has directed every West End cast change as well as productions in seven other countries, including this one.  You can’t ask for more experience with this property, but he was a little hard to hear at times.

Antony Eden portrays the Director and Young Kipps with a stentorial voice, bounding energy, and great confidence.  He has a massive West End brag sheet, and in addition, is quite familiar with this part, having played it over 1,000 times.

But what about The Woman in Black character?  You’ll have to see the play to sort that one out.

“The Woman in Black” from the novel of the same name by Susan Hill is adapted to the stage by Stephen Mallatratt; produced by American Conservatory Theater; and plays at ACT’s Strand Theater, 1127 Market St., San Francisco, CA through January 16, 2022.