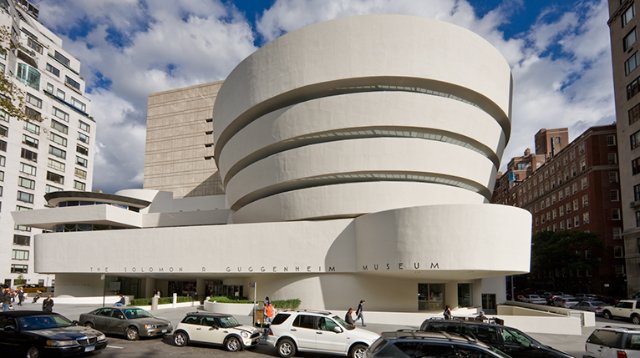 A major retrospective devoted to the work Gertrud of Gego, or Goldschmidt (b. 1912, Hamburg; d. 1994, Caracas) will be presented at the Solomon R. Guggenheim Museum. Across five ramps of the museum’s rotunda, Gego: Measuring Infinity will feature approximately 200 artworks from the early 1950s through the early 1990s, including sculptures, drawings, prints, textiles, and artist’s books, offering a fully integrated view of the influential German-Venezuelan artist and her distinctive approach to the language of abstraction. Examining the formal and conceptual contributions she made through her organic forms, linear structures, and systematic spatial investigations, this exhibition will ground her practice in the artistic contexts of Latin America that flourished over the course of her lengthy career. It will consider Gego’s intersections with—and departures from—key transnational art movements including geometric abstraction, Kinetic art, Minimalism, and Post-Minimalism, tracing a markedly individual artistic path. A selection of this retrospective will be presented at the Guggenheim Museum Bilbao in the fall of 2023.

The Solomon R. Guggenheim Museum will present a solo exhibition by Sarah Sze (b. 1969, Boston) featuring a series of site-specific installations from the acclaimed New York-based artist. Sarah Sze: Timelapse, which unravels a trail of discovery through multiple spaces of the iconic Frank Lloyd Wright building, offers Sze’s ongoing reflection on how our experience of time and place are continuously reshaped in relationship to the constant stream of objects, images, and information in today’s digitally and materially saturated world. The exhibition begins outside with two new video installations through which Sze reimagines the iconic UNESCO World Heritage architecture itself as a keeper of time for the public that can generate collective experience and memory. Inside the museum, quiet gestures, such as a single pendulum hovering above the fountain on the rotunda floor and a small sculptural installation tucked into an interstitial space, reveal a path to the sixth and uppermost level of the rotunda. Visitors will enter an immersive environment: a panoramic sequence of eight sections occupied by a new series of works comprising painting, sculpture, video, drawing, and sound. Bookending the new installation will be two key works from the Guggenheim’s collection, both on view for the first time in New York: Untitled (Media Lab, Casino Luxembourg) (1998), an early example of Sze’s incorporation of video in her practice, and Timekeeper (2016), a monumental multisensory multimedia installation that underscores how the ubiquitous nature of technology has inflected our understanding of temporality. Time, as it is shown unfolding in the ensemble of works gathered for this exhibition, is a collection of lived and remembered experiences. Sarah Sze: Timelapse is, as Sze puts it, “a contemplation on how we mark time and how time marks us.”

Pablo Picasso (b. 1881, Málaga, Spain; d. 1973, Mougins, France) arrived in Paris from Barcelona in autumn 1900, during the final weeks of the Universal Exhibition. As many before it, this major world’s fair was staged to amplify industrial, technological, and artistic innovations (the Spanish pavilion included Picasso’s own work), even as it simultaneously promoted ongoing colonial endeavors. The ville lumière, or “city of lights”, captivated the nineteen-year-old Spaniard. He absorbed everything the city had to offer over his two-month stay and after his return to Paris the following spring. Picasso patronized not only the art galleries, but also the bohemian cafés, nightclubs, and sensational dance halls that embodied the hilltop neighborhood of Montmartre. A concentrated exhibition, Young Picasso in Paris explores his early production from around the time of this artistic and personal transformation largely through his major painting of the eponymous dance hall, Le Moulin de la Galette (ca. November 1900). Among other notable features, this painting—one of his first executed in the French capital—represents the gender fluidity present in fin-de-siècle Paris, and also foreshadows the social disenfranchisement of the working classes that Picasso brought into sharper focus with his subsequent Blue Period (1901–04).

This exhibition is part of The Picasso Celebration 1973-2023 program, organized with the support of the Musée national Picasso, Paris.

Opening in September 2023, the Guggenheim Museum presents Experimental Art in South Korea, 1960s–70s. This is the first exhibition in North America to explore the influential art practices, often referred to as Experimental Art (silheom misul), that emerged in South Korea in the decades following the Korean War (1950–53). Spanning the 1960s and the ’70s, it examines a group of loosely affiliated artists whose artistic production reflected and responded to the rapidly changing, globalizing sociopolitical and material conditions that shaped South Korea. The Guggenheim’s show presents the artists’ pioneering approach to materials, process, and performance, and features major historic pieces across various mediums including painting, sculpture, ceramics, photography, video, installation, and film to illustrate how artists harnessed the power of contemporary languages of art to explore pressing sociohistorical and metaphysical issues.  Experimental Art in South Korea, 1960s–70s offers an unprecedented opportunity to experience the creativity and breadth of this remarkable generation of Korean artists.

The exhibition is the result of a collaborative research effort between the Solomon R. Guggenheim Museum, New York, and the National Museum of Modern and Contemporary Art, Korea (MMCA). It is co-organized by Kyung An, Associate Curator, Asian Art, Guggenheim Museum, and Soojung Kang, Senior Curator, MMCA.

Going Dark: The Contemporary Figure at the Edge of Visibility is a major exhibition that brings together a multigenerational group of artists who engage the “semi-visible” figure—representations that are partially obscured, including, in some cases, literally darkened. In its inherent tension between clarity and occlusion, the semi-visible figure is a site of great material complexity and experimentation. This exhibition suggests that the concept of “going dark” is a tool used by artists to reflect enduring and urgent questions surrounding both the potential and the discontents of social visibility. Across media—painting, photography, sculpture, video, and installation—Going Dark names, charts, and makes meaning of the semi-visible figure, arguing for its significance in contemporary art as a genre of unique conceptual and formal power. This exhibition will occupy the six ramps of the museum’s iconic rotunda space.

Going Dark: The Contemporary Figure at the Edge of Visibility is organized by Ashley James, Associate Curator, Contemporary Art.