And That's the Truth 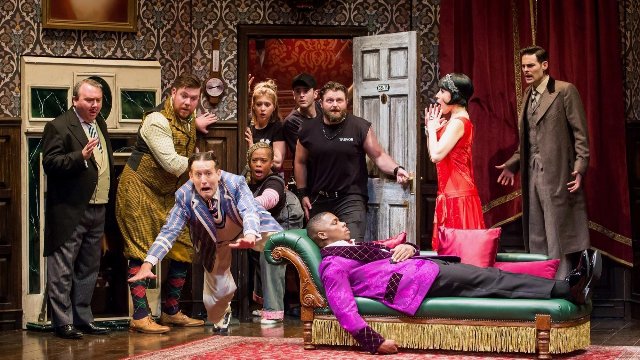 The Play That Goes Wrong opened Friday night at the Broadway Playhouse. By audience reaction, the play is a barrel of laughs; it’s a wannabe farce that doesn’t quite make it to the required level of wittiness. Directed by Matt Di Carlo, the production was created by Mischief Theatre, from London’s West End. The script is by three Mischief ensemble members: Henry Lewis, Jonathan Sayer and Henry Shields.

The set design by Nigel Hook is elegant (until it falls apart) and it’s that element that won the play a Tony award in 2017. Set design, not the play itself. To be fair, it also won the Broadway.com Audience Choice Award for Best Play. But it is repetitively, mindlessly silly and relies on old, wornout humor, both physical and verbal. (See my explainer below on my 2-star rating.)

The opening night audience roared with laughter at every line spoken. The laughter became even more uproarious as the play, the murders, scenery accidents and pratfalls progressed. The gentleman sitting behind me must have been exhausted by the time the play ended two-plus hours later. He was never silent. He clearly enjoyed the show. So did the rest of the audience.

The premise of the play that actually goes wrong is introduced by Chris Bean, president of the Cornley University Drama Society (played by Matt Mueller). The drama society is staging the play The Murder at Haversham Manor in the USA, a production made possible, the program notes, by the British-American Cultural Exchange Program. The cast has been rehearsing for weeks, as Bean explains in his introduction. He explains a lot more, which we need not go into. The playbill includes two sets of program credits, one for The Murder at Haversham Manor and one for TPTGW.

A brief plot description. The play opens with the murder victim (Charles Haversham, played by faux actor Jonathan Harris, who is actual actor Joseph Anthony Byrd) staggering in and dying on the chaise longue. From there on, we have discoveries of the murder, the tears of Charles’ fiancée Florence (Sandra Wilkinson/Kelly O’Sullivan) who is secretly having an affair with Charles’ brother Cecil (expert mugger and acrobat Max Bennett/Jarred Webb). Charles’ best friend Thomas (Robert Grove/Jonah D. Winston) is there to mourn as is the butler Perkins (Dennis Tyde/Michael Kurowski), master of mispronunciation. (Mispronunciations are a repeated laugh-getter.) Inspector Carter (Chris Beam/Matt Mueller) arrives to solve the crime, which turns into crimes. And the destruction begins. Crashing scenery. Misplaced props. Frequent tableaus.

Haversham Manor is set in the 1920s drawing room of an English country house. A loft area on one side of the stage is the library. The décor is elegant, featuring a large spaniel portrait above the fireplace. There are doors and windows for slamming and escaping and many items hung on the walls that may be in need of rehanging.

One of the many recurring gags is crew members rushing on stage to save or fix something. Stage manager Annie Twilloil (Ernaisia Curry) is especially engaging as the crew member who is responsible for keeping things together, then ends up substituting for Florence, first to her consternation and then her enjoyment. Lighting and sound operator Trevor (played by Colton Adams) has to dash down from his sound booth frequently to fix something or play someone.

Be sure to read the Haversham Manor credits. Chris Bean is listed as performing virtually all the tasks normally performed by a creative crew; he is everything from box office manager to fight choreographer.

The play is part of Broadway in Chicago’s series of touring productions. The show’s press release states that the cast is made up of local Chicago actors and indeed, all the cast members have local connections and some have many local credits. It is an Equity production, which means a great deal to these local actors, since the play is scheduled to run throughout January.

EXPLAINER. Because I’d like to see these actors be able to earn their Equity salaries until the end of the run, I’d love to give this a 4-star rating. However, that’s not going to happen. But I will offer a dual rating. For you, the theatergoer who heaven knows needs an evening of laughter after these almost-two pandemic years—for you, I’ll give TPTGW 3.5 or even 4 stars. However, for me, the theater critic who has to live with herself—I’ll give it 2 stars. (I’m being kinder than my fellow 3CR critic, who reviewed TPTGW on its 2018 visit and gave it 1 star.)

The Broadway production of The Play That Goes Wrong ran for 745 performances in 2017-19 at the Lyceum Theatre; it opened off-Broadway in February 2019 and then was suspended due to the pandemic. Performances resumed this October.

The Play That Goes Wrong continues at the Broadway Playhouse, 175 E. Chestnut at Water Tower Place, through January 30 with performances Tuesday through Sunday, including some matinees. Tickets are $35-$126. Running time is 130 minutes including one intermission. The usual Covid protocols are in place: proof of vaccination is required for entry and masks must be worn while in the theater building.