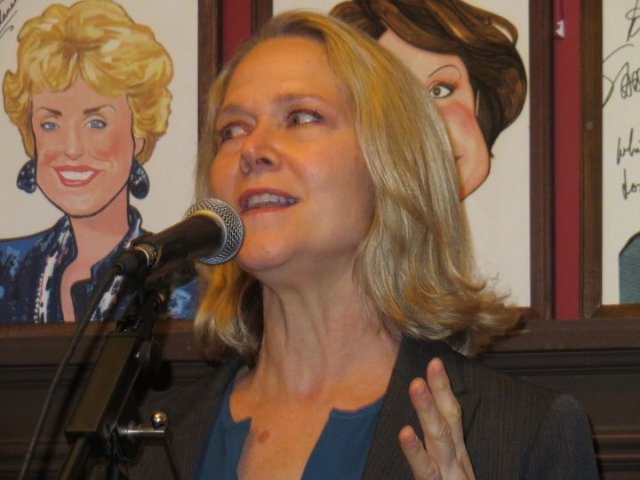 Rebecca Luker, a much-praised Broadway actress and singer who earned three Tony Award nominations during her 30-year career, died on Wednesday, Dec. 23 in a Manhattan hospital. She was 59.

Among those paying tribute to her on Twitter was Laura Benanti. She wrote: “Rebecca Luker was humble, loving and kind. So much so that you would sometimes forget her otherworldly talent, until she would sing, and her golden voice would wrap you in peace. She was an angel on earth, and now in Heaven. I will always love you, Becca.”

Luker, blessed with a crystal-clear operatic soprano, often played the ingenue in musical theater roles. They included Show Boat, The Sound of Music, and The Music Man.

In fact, Luker received her first Tony Award nomination for her work in Show Boat (1994). In that groundbreaking musical, she portrayed Magnolia, the captain’s teenage daughter, whose marriage to a riverboat gambler ruined her life.

Luker’s second Tony nomination honored her work in The Music Man (2000). In that show, she played Marian, the prim River City librarian who grows suspicious of a traveling conman.

In between Luker’s first and second Tony nominations, she won praise for playing against type in a 1997 Encores! production of The Boys From Syracuse. Specifically, Luker portrayed Adriana, a neglected wife. In his review for “The New York Times,” Ben Brantley wrote that Luker exuded “a disarmingly confectionary sexiness.”

By the end of 1998, Luker once again played an ingenue. This time it was Maria, a live-in governess of seven children in The Sound of Music.

Luker’s third Tony nomination, for best featured actress in a musical, recognized her work as Winifred Banks in Mary Poppins (2006).

While Luker achieved much success in musicals, she was “not a musical theater person,” she told “Playbill” magazine in 2003. Rather, “I love rock music and jazz. I love the 70s stuff I grew up with,” Luker noted.

Rebecca Joan Luker was born on April 17, 1961 in Birmingham, Ala. And she grew up in Helena, a small nearby town. Rebecca was one of four children born to Norse Doak Luker Jr. and Martha (Baggett) Luker. Her father was a construction worker, while her mother worked as a high school treasurer. Rebecca sang in the choir of her church, First Baptist of Alabaster). In addition, she played with the Thompson High marching band. Also, during high school, Luker entered a beauty pageant. In it, she sang “Much More” from The Fantastics. In the end, Luker won a college scholarship as first runner-up to Alabama’s Junior Miss.

Luker studied at the University of Montevallo, 14 miles from her parents’ home. She majored in music and graduated in 1984. Commencement came a year later than planned; Luker took time off to work with Michigan Opera Theater. There, she met her future New York agent. Five years after college, Luker was performing on Broadway. She took on the lead female role in The Phantom of the Opera. Specifically, she played Christine, the chorus girl who becomes the phantom’s obsession.

Luker made her Broadway debut in The Phantom of the Opera. At first, she served as original star Sarah Brightman’s understudy. Later, she became an alternate. Eventually, she took over as Christine in 1989, remaining in the show until 1991.

Immediately after, Luker played the dead Aunt Lilly in The Secret Garden.

In several of her later Broadway roles, Luker replaced the original actress in a long-running hit. For instance, she took over as Claudia in Nine in 2003; Marie in Cinderella in 2013, and Helen in Fun Home in 2016.

Off-Broadway, Luker played such roles as a Scottish lass in a 1996 revival of Brigadoon, and a droll Buffalo matron in the A.R. Gurney comedy-drama Indian Blood in 2006. Five years later, Luker played an Italian duchess mourning her son’s death in the musical Death Takes a Holiday.

In addition to her work on stage, Luker thrived in the cabaret scene. She performed at intimate venues such as Café Carlyle and Feinstein’s/54 Below.

Luker’s final stage role was a small-town minister’s narrow-minded wife in a 2019 Kennedy Center production of Footloose. And in March 2020, Luker performed in a concert honoring the lyricist Sheldon Harnick.

Although Luker was first and foremost a stage actress, she also appeared on screen. She made her screen acting debut while in her late 30s, appearing in Cupid and Cate in 2000. In the Hallmark Hall of Fame television movie, Luker played the heroine’s sister.

In between 2010 and 2020, Luker played guest roles on series. They included Boardwalk Empire and N.C.I.S. New Orleans. Also, Luker acted in three feature films. They included Not Fade Away (2012). It’s a drama about a teenage rock band.

Luker married actor Gregory Jbara in 1993; they divorced three years later. In 2000, Luker married the actor Danny Burstein. The two met when they starred together in Time and Again in San Diego.

In a 2016 “Theater People” podcast, Luker said that she was thankful for her roles. However, she added that she wished she’d studied acting more, appeared in more plays, and performed more comedy.

“I wish I had branched out a little more,” a cheery Luker said. “Maybe played a bitch or something.”