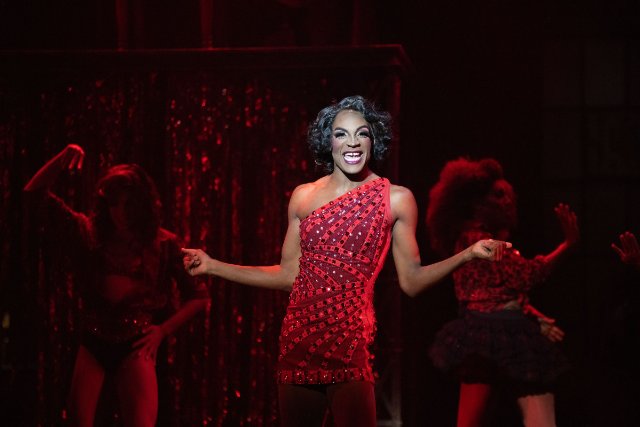 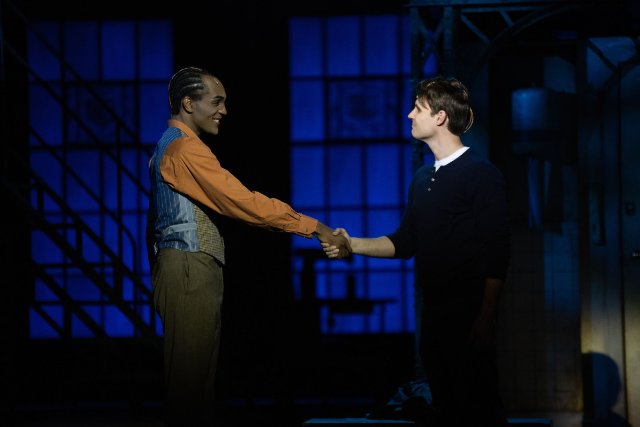 If ever there were a time that we needed a show to “raise us up,” surely it is now.

With a pandemic destroying lives and fierce division tearing us down and keeping us apart, we need a unifying show such as Kinky Boots, whose diverse songs include the energetic “Raise You Up/Just Be.”

Fortunately, the Ft. Lauderdale-based professional, nonprofit company, Slow Burn Theatre Co., is performing an invigorating production of Kinky Boots through Jan. 2.  Thanks, in part, to strong direction, performances, and the intimate confines of Broward Center for the Performing Arts’ Amaturo Theater, the production draws us in to the world of characters whom we do not want to leave.

The musical features a book by multi-Tony Award-winning theater artist Harvey Fierstein, as well as music and lyrics by Grammy Award-winning artist Cynthia Lauper. The show takes place around the present day in London and Northern England.

Kinky Boots is based on a film of the same name. Meanwhile, the movie’s basis is a true story. In the film and faithful stage musical adaptation, the Price & Sons shoe factory in Northern England is on the brink of bankruptcy. And so, the surviving son, Charlie Price, realizes he must enter a niche market if the business is to survive.

Enter Lola, a man whose real name is Simon. She is a cabaret performer and transvestite in need of footwear that will fit well on men. Ultimately, Lola’s need saves Price & Sons, as it transitions to permanently making red, high-heeled, thigh-high boots. They give this musical its title.

Kinky Boots brings together two people who, by looking at them and listening to them, you guess would go to their graves never knowing either existed. But when Charlie hires Lola to work in his company, the two realize they have more in common than they would ever imagine. The odd couple come to respect and admire each other. In a divisive society such as ours, we sorely need such an example.

Kinky Boots is a layered musical that touches on several themes without preaching, offering easy answers, or seeming over-stuffed. For example, the show asks what it means to be a “man.” In addition, the musical is about legacy, family, being true to oneself, respecting other people for who they are, the bridging of differences, and differing father-son expectations. In particular, Charlie’s father expected his son to carry on the family legacy by taking over the family business. At least, that is what Charlie thinks. Meanwhile, Simon/Lola’s father, himself a boxer, expected his son to also become a prizefighter.

In fact, Kinky Boots brings to mind the British coming-of-age film, Billy Elliot, as well as its stage musical adaptation, which carries the same title. Billy Elliot, which also takes place in northern England, features a boy acting against his father and their community’s wishes. Specifically, the lad wishes to become a ballet dancer, while the macho father and citizens wish for Billy to become a boxer.

Like Billy, Simon/Lola is an outsider who some might consider a “sissy.” Those folks include Price & Sons employee Don, an intimidating, macho man and Simon/Lola’s nemesis. Ironically, Lola ultimately shows that she is more of a man than Don, whose blue-collar, macho mentality cannot conceive of a transvestite being a real man.

While there are several rousing numbers, several ballads about parental expectations cut to the show’s emotional core. For instance, in “Not My Father’s Son,” Lola realizes that even though she tried to please her father, who wanted junior to win the boxing championship he never earned, a boxer is not who Lola is. Similarly, Price realizes he is not the person to carry on as the next generation of Price & Sons.

In Slow Burn’s production, a vibrant-sounding, eight-piece orchestra accompanies the performers when they sing without drowning them out.

The multi-threat performers boast clear, expressive singing voices. They emote well, and at least one performer shows he can hold a note for an impressive amount of time. If there is a knock on the musical performances, the act one closer, “Everybody Say Yeah” could be more energetic.

The lyrics are mostly serviceable. However, the number titled “The Most Beautiful Thing in the World,” is weak. The song, using the same melody, repeats the same lyrics over and over again. It does nothing to move the story forward or deepen characterization. Kinky Boots marked Lauper’s first time writing for musical theater, and it shows in some spots.

But Slow Burn’s production is mostly strong. As a matter of fact, during the reviewed performance, the cast deftly covered up an awkward moment, which did not in the least derail the performance.

Elijah Word presents an at-times flamboyant Lola, but the performer steers clear of stereotypes. Rather, he infuses Lola with a sexy confidence and an in-your-face assertiveness. Clearly, this character will not back down from any challenge, including a bullying bloke. Word’s commanding stage presence is impressive. Yet, he also deftly captures the character’s vulnerable side.

Meanwhile, Dominique Scott makes Charlie a likable, driven, and passionate young man who conveys a sense of urgency to make the boots in time for a fashion show.

Johnbarry Green invests Don with a macho demeanor, and speaks in a loud, coarse voice. To his credit, Green softens toward the end. Speaking of the ending, I wanted to see Don highlighted more when he actually wears the kinky boots. It’s a big, proud moment for the character, who has finally opened his heart to accept Lola…and likely many others.

Tory Vagasy is pushy as Charlie’s girlfriend, Nicola, who wants him to stay with her. A conflict that Charlie faces is whether to move to London with Nicola, or remain in Northern England to take over the family business following his father’s death.

A fine supporting cast lends energy and believability to the production. They, along with the actors playing leading roles, nail a British accent.

Under Patrick Fitzwater’s assured direction, the pacing is fluid and fast-paced, yet he leaves room for touching moments to land.

Scenic designer David Rockwell’s roomy, sturdy-looking set transitions seamlessly from the red brick, older looking factory to the glittering world of Lola’s nightclub and the runway of the fashion show. The set consists of two levels. The top level allows Fitzwater to, for instance, highlight performers.

Kinky Boots carries the kind of unifying spirit that our divisive world needs right now. More than once, a character says “Ladies, gentleman, and those who have yet to make up your minds.”

Surely, the phrase is pleasing to 21st century ears.