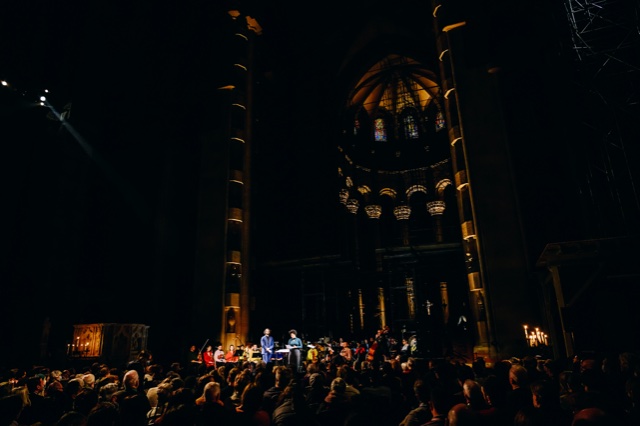 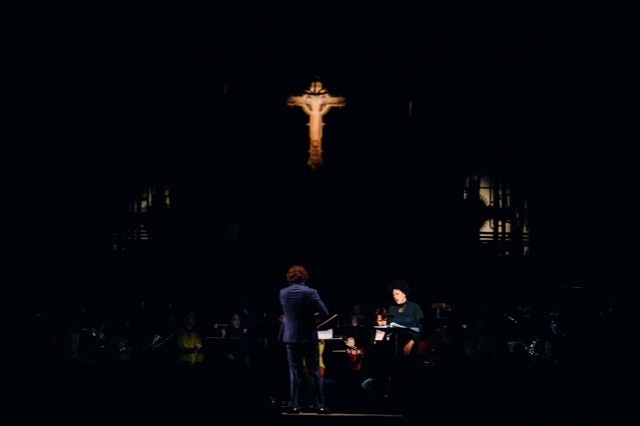 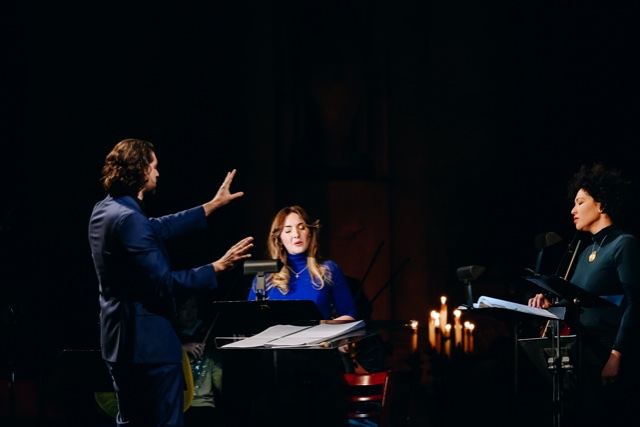 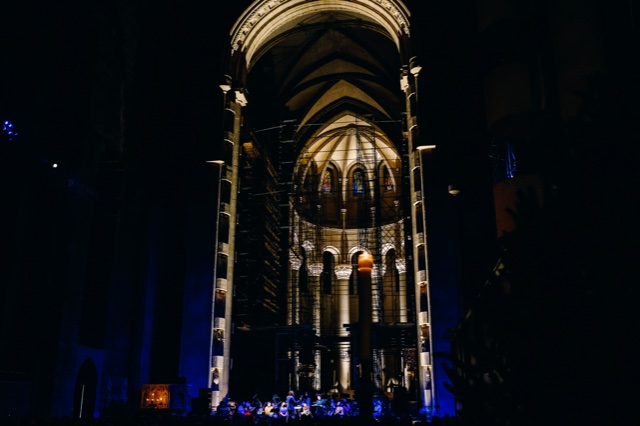 Lighting designer John Torres makes the most of the navies the Cathedral. 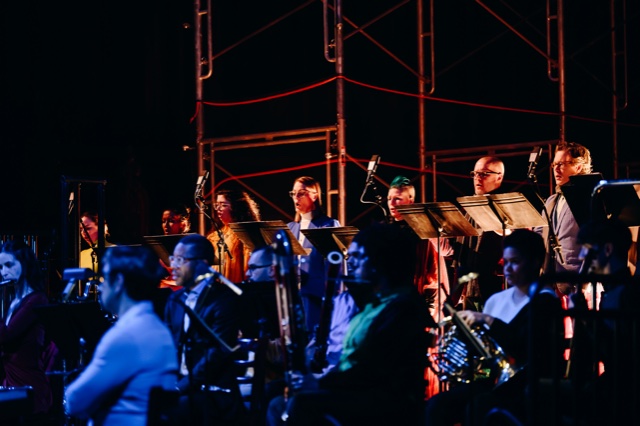 The orchestra with the Choir of Trinity of Wall Street in the background. 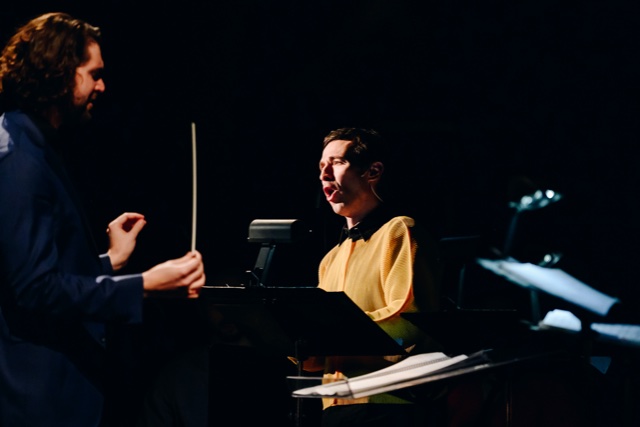 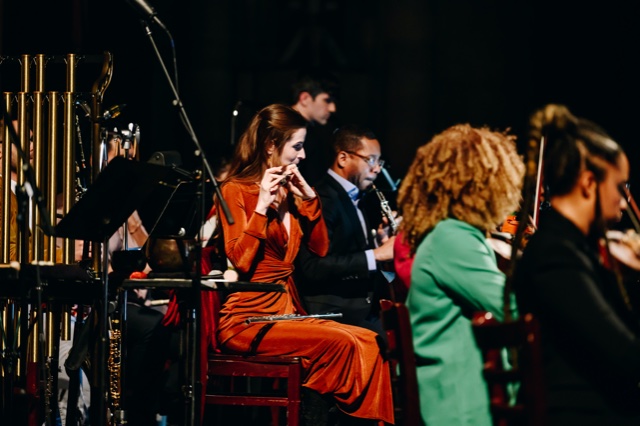 The orchestra for El Nino at St. John the Divine. 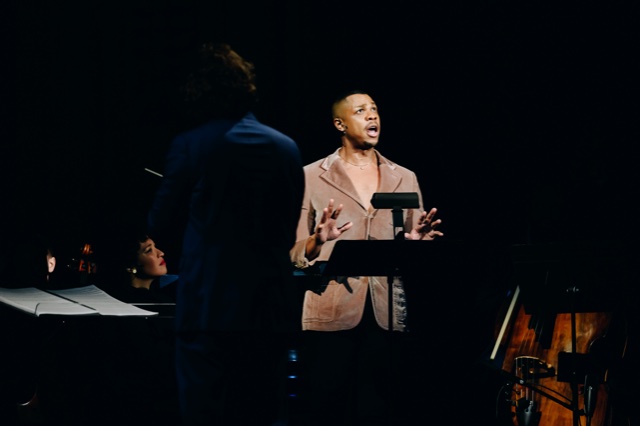 Davone Tines, a premier bass baritone, stole the show. Bad guys of course have an advantage. 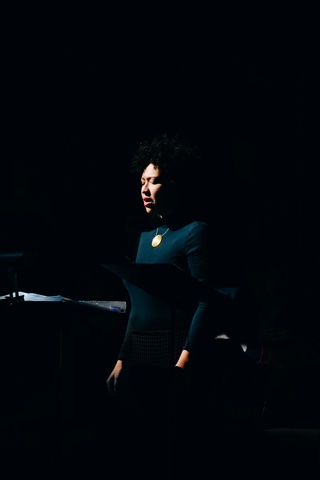 Julia Bullock and the American Modern Opera Project brought a new version of John Adams’ and Peter Sellars' El Nino to the Cathedral of St. John the Divine, known for its support of the arts and blessing of all animals.

The birth of every child is full of hope and thankfulness. Mothers are affected immediately. Mary, mother of Jesus, and Julia Bullock, the stunning soprano who gave birth to her first child this fall, are no exception. In the Christian faith, Christmas celebrates this moment.

Bullock’s version of El Nino is encouraged by her frequent artistic collaborators, John Adams and Peter Sellars, the original creators of the work. El Nino was first performed in Paris at the Théâtre du Châtelet in 2000. An orchestra of 45 instruments, choirs and women soloists Lorraine Hunt Lieberson and Dawn Upshaw, who mentored Bullock at Bard, gave a heralded  performance. The Three Kings were sung by three countertenors.

Now Bullock has done her own arrangement of the work, with the blessing of Adams and Sellars. She writes: “To present El Nino: Nativity Reconsidered in this distilled version and share it in a sacred space is meaningful because churches, in their conception, were designed as places for us to gather together, hear stories,  reflect on lessons from those narratives and witness each other in the process.”  As far as can be determined, this is the first time the work has been performed in a house of the Lord.

The Three Kings are one singer:  countertenor, Anthony Roth Costanzo. Bullock sings the soprano role. She is joined by Rachel Wilson, mezzo. Davone Tines, the commanding bass-baritone, sang in such rich low tones with diction so perfect that he might have been speaking. He ‘shakes the heavens’ in his King James’ language Tines is a born preacher as well as clearly one of the foremost bass-baritones of our times. The Choir of Trinity of Wall Street adds textural complexity and underlines dramatic moments.

The Cloisters in upper Manhattan was the setting for a smaller production in 2018. The Cloisters are made from medieval monasteries, but they are not sanctified. The Cathedral is. Yet the Cloisters provided a start for Bullock, who once lived in the neighborhood and was The Metropolitan Museum’s Artist of the Year.

For Bullock, the association with many of her most admired and respected mentors and colleagues must in part have inspired her English translation of the text, which, although it was originally in English, has been performed in a mix of Spanish and English  by this same group.

In the new version, Bullock starts with a beautiful translation of Mexican poet Rosaria Castellanos’ Annunciation. Eager and loving hope is abundant.

Yet this take on the birth of the Christ child is not all light.  Lighting director John Torres captures both light and darkness.  King Herod’s slaying of the children of Bethlehem is writ large in notes and song.

Christopher Reif, the conductor and also musical arranger, has a gritty take on the horrifying moments, performed with rhythmic instability and wild swings by the chamber orchestra assembled in the nave. Jagged rhythms and jolting musical lines were captured by the ensemble. Dramatic chimes sound like pealing church bells of a carillon. Conor Hanick played piano. The strings often bowed Adams' repeats, which were picked up from time to time by urgent repeats in the text.  A guitar gave an unusual Spanish flavor to this nativity setting.

Andrew Lulling, the sound designer for the evening, made musical sense of this difficult acoustical space. With a thousand listeners in attendance, it takes 10 seconds for the sound to travel from nave to the rear of the seating space. Voices echo.

All four singers joined to sing Sor Juana Ines' de la Cruz poem celebrating wonder as the child is born. Who will take care of this child?  Neither air nor fire. The Earth will.

This will become a tradition and we can relish thoughts of its reprisal in 2023 with stunning memories of the event this year. This group of artists from the American Modern Opera Company, with their guests, offered a new way to celebrate the season in a style that is perfect for the needs of now.