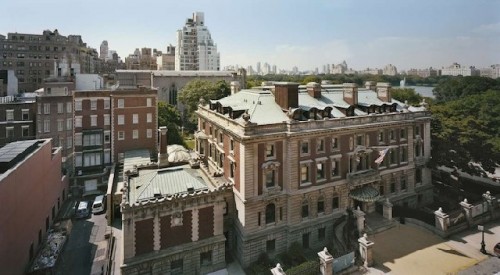 Cooper-Hewitt Museum from above. 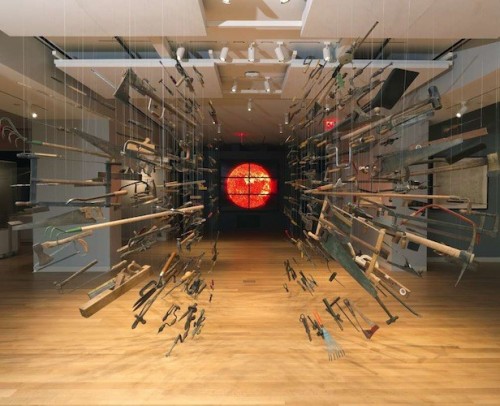 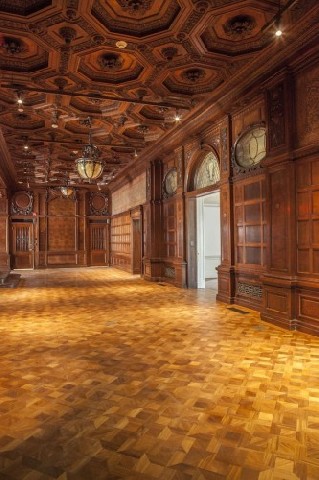 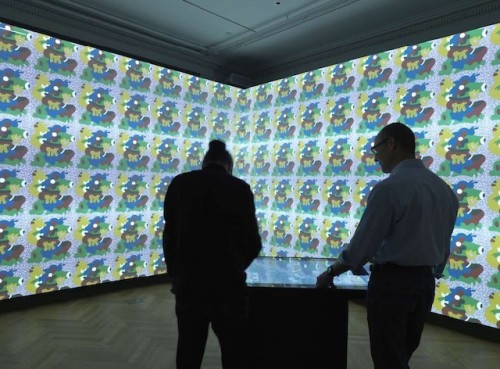 We go to a design museum to see the best of form and function.

Because design is the intersection of art and function, aesthetics and technology, its physical grace is underscored by its utility. In the last half-century, objects of design (in some cases objects of desire) have been showcased with care and scholarly intensity in design museums throughout Europe, Asia, and North America. Over the years, the enthusiasm for design has spread. Now corporations see the notion of good — even great design — as a goal. Design is not only fashionable and chic, but it has become mainstream.

In some cases, design exhibitions have not caught up with the news. The worst shows somehow take on the air of furniture showrooms or, for displays of more technical pieces, the exhibitions look too much like pedestrian science fairs or trade shows. The best design exhibitions rise above these limitations. New York’s Cooper-Hewitt attempts to set the exhibit bar very high. And when they succeed, the exhibitions at the museum explore the history and culture of design and decorative arts with transcendent panache.

Restored, renovated and expanded, the Cooper-Hewitt Museum, the Design Museum of the Smithsonian Institution, elegantly reopened at its location on East 91st in New York City on December 12, 2014. Located a few blocks from the Guggenheim, the Neue Museum, and the Metropolitan Museum of Art, and housed in the former Andrew Carnegie Mansion that was built between 1899 and 1902, the Cooper-Hewitt Museum collects and displays design and decorative arts from over the last 3000 years.

The dark and awkward previous space has been transformed into four appealing floors of state-of-the-art galleries that feature many hands-on aspects that stress accessibility. At times, the integration of stately mansion and cutting-edge contemporary museum is a bit awkward, but generally preservation has been made to work very well with innovation. The Cooper-Hewitt’s main exhibition space has been significantly expanded (by 60%) as were its other museum areas. Also part of the expansion: a new, more comfortable café and a larger museum shop. The museum’s makeover took about a decade to accomplish and involved twelve design teams. Additional parts of the museum, including the prominent garden, will be completed in the spring of 2015.

Not everything is visually new in the renovation. The newly restored Caen stone foyer in the Great Hall and its finely replaced filigreed teak and parquetry pay homage to the mansion’s Edwardian handmade beginnings. In this setting, the white boomerang shape of the new admissions desk provides an intriguing juxtaposition of the new with the old, much like a contemporary painting or sculpture adds texture and visual interest to an antique interior.

Many of the exhibitions effectively reflect an essential part of the Cooper-Hewitt’s mission: to address 21st Century design issues, such as evolving fabrication methods, materials, and products.
The “Process Lab” on the first floor invites the visitor to explore the process of design problem-solving. Along with various other cutting-edge tools, the show includes an industrial-strength 3-D printer. The “Beautiful Users” exhibit presents objects from daily life as a means to examine the development of user-oriented design. On the second floor, “Making Design” brings together an array of pieces from the permanent collection, while The “Hewitt Sisters Collect” focuses on historical context. It tells the story of founders Eleanor and Sarah Hewitt and their own personal collections, which included textiles, hatboxes, wall coverings, and decorative furniture.

Located on the third floor, the largest exhibition area covers 6000 square feet. Currently on view is “Tools: Extending Our Reach,” an encyclopedic exhibit that borrowed extensively from several other Smithsonian museum collections. The eye-catching center piece of this walk-through installation is a flotilla of hammers, saws and other hand tools that appear to be floating in the air. Astronaut suits, a delayed live feed of the Sun’s surface, satellites and telescopes are also included in the show, which might be more appropriate for a science museum. Still, each object or image’s physical beauty is not lost on the viewer.

Perhaps the strongest new feature of the new museum is that so much more of the museum’s vast holdings are now on view and/or are digitally accessible. Interactivity is also spotlighted: each visitor is given a returnable black 8” stylus that can be used to “design” on any of the multi-touch tables set throughout the museum. For example, by sketching a zigzag, objects with zigzags from the collection pop up on a monitor. Information about collection pieces is also easily downloadable. In addition, a unique app address on each ticket allows visitors to access supplementary information and images later as well.

Collecting the historical and significant elegance of various forms of technology has always been part of the Cooper-Hewitt mission. In the 21st Century, particular notice has gone to cyber-related elements as well as new materials and new design systems. The museum’s original collection included architecture, sculpture, painted architectural details, decorative arts, woodwork, metalwork, pottery and ceramics, costume, musical instruments and furniture. Examples of graphic design, sometimes referred to as peripherals, ranging from matchbooks to posters to shopping bags were also accumulated, as were tools.

Home to the National Design Awards, the museum also supports a masters degree program at New York’s Parsons: The New School for Design. The Cooper-Hewitt’s National Design Education Center assists educators in teaching students K-12 about design. This effort includes outreach programs that encourage students and teachers to think like designers, approach the world visually, and understand the role that design plays in our lives.

In its new, enlarged, and enhanced space, The Cooper-Hewitt Museum has increased its ability to present provocative and compelling perspectives on design. At its best, this museum pays homage to design as if it was great art: visitors are infused with delight and a sense of wonder by what design was, is, and what it means in our lives.