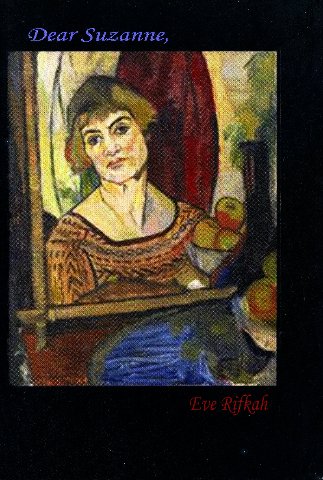 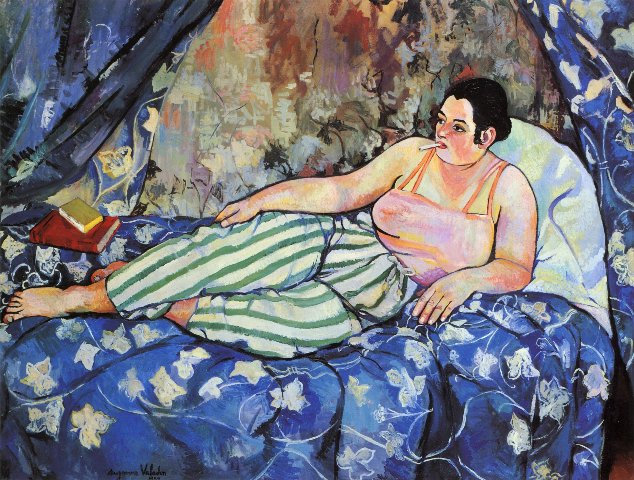 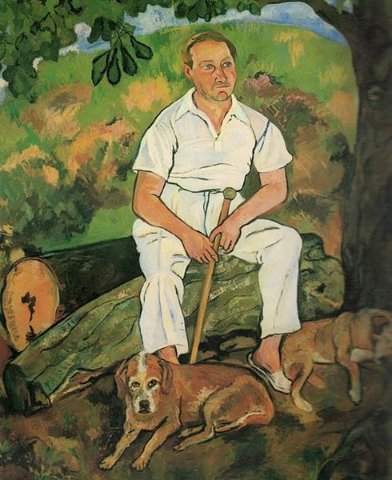 Her husband Andre Utter and his dogs. 1932 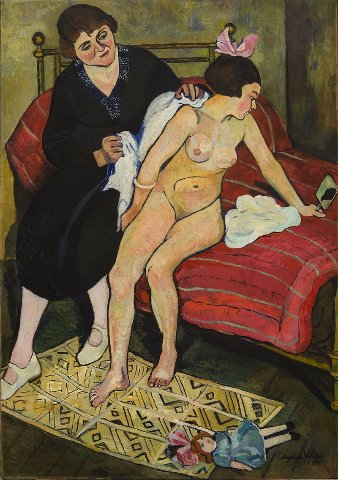 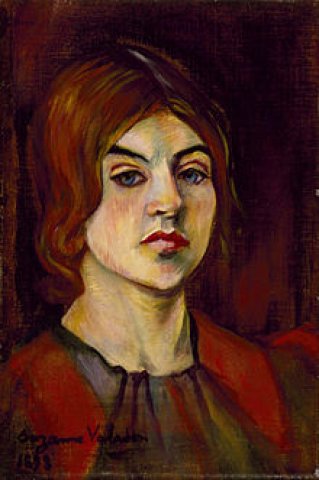 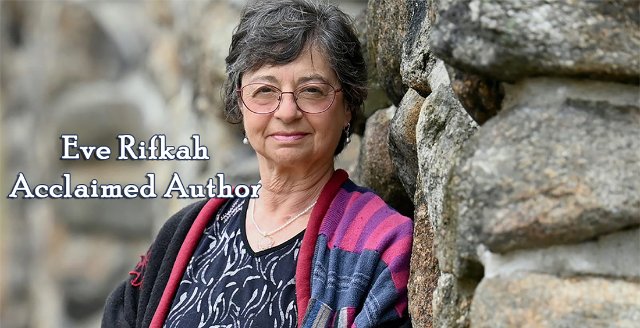 The first of 79 entries in Dear Suzanne by Eve Rifkah, is “My Father Explains The Dance at Bougival at the Museum of Fine Arts Boston.” The next “November 6, 1952” recounts an incident in a callous doctor’s office while held down by her mother. The third, “Birth Record,” introduces the artist and model, Suzanne Valadon in her own voice.

Like billiards we will careen back and forth, with bank shots and soft finesse between the personas of the artist telling her complex and compelling story as well as the poet interjecting aspects of her own.

The poems generally spaced on single pages explore a variety of forms. Some are short, three graph prose stories, while others explore different cadences and forms as the word like soft rain fall and congeal on the page. Even when reading to ourselves we strive to conform to the intended rhythm and form of the words.

We learn a lot about the artist, her lovers, collaborators, son Maurice, husbands and friends. There is somewhat equal time getting to know the background of the poet and signifiers of how she explores self through the persona and paradigms of other.

This is a book of verse which draws more from, than adds to, art history and biography.

It is best to know something of the artist and her bohemian milieu before reading the poetry.

As a teenager she was the favorite model of Pierre August Renoir including the charming woman in Bal a Bougival which Rifkah was so taken by at the MFA. She was the women in the other two paintings Dance in the City and Country Dance. When interrupted by his fiancé, following that encounter, the contrite artist rubbed out Suzanne and substituted the face of Aline Victorine Charigo.

The three dance painting were brought together in the MFA’s great Renoir exhibition. Eve, then living in Worcester, notes visiting.

Aline was not a great beauty like Suzanne but was a loyal wife, mother, model and care provider. Like men of his era Renoir was on the town Saturday night but home to join her for church on Sunday morning. His son Jean, a filmmaker, was as great an artist as his father.

With no formal training, from a young age, Valadon was in the studios and beds of remarkable artists. There was a two-year liaison with Henri de Toulouse Lautrec, and a shorter one with composer Eric Satie. She was accepted as a serious artist and Degas bought her work. In her lifetime, Valadon produced approximately 273 drawings, 478 paintings, and 31 etchings, excluding pieces given away or destroyed.

Rifkah highlights her remarkable evolution in pithy vignettes that weave in and out with her own work and exhibitions. Reading this volume of verse it is best to do so with well calibrated bi-focals. I did not so much read this slim volume as absorbed it. Mostly I appreciated being allowed into a private and intimate world.

The poet treads lightly on how the beautiful model of Renoir gazes unflinchingly at us through haggard self portraits. It would seem that la vie boheme ravaged this great beauty. Her paintings today are much admired for not being pretty confections of the male gaze. She was able to convey herself and other women with compelling honesty.

Her images are more mordant than the bon bons and confections of the impressionists she posed for as a girl.

Then there is the issue of her son Maurice (1883-1955). Valadon's friend Miquel Utrillo signed papers recognizing Maurice as his son but his paternity remains unknown. Given diluted wine as a child to calm him down, at a young age, he was addicted. He had a knack for making generic views of Montmartre copied from post cards. They sold well to tourists and funded binges.

We get glimpses and thumbnails of Maurice that make us hungry to know more. His work is both signifier and parody of bohemian Montmartre. When I went looking for it in the 1950s it had become a tourist trap. To this day I recall the ravaged beggar woman singing Edith Piaf’s “La Vie en rose” accompanied by a tramp on accordion.

Eve Rifkah was co-founder of Poetry Oasis, Inc. (1998-2012), a non-profit poetry association dedicated to education and promoting local poets. Founder, and editor DINER, a literary magazine with a 7-year run. She is the 2021 recipient of the Stanley Kunitz award.

She has run an ongoing writing workshop for 15 years and teaches workshops and classes at WISE (Worcester Institute for Senior Education). She lives in Worcester, MA with her husband, musician, artist, writer Michael Milligan and their cat.

Her current project entails gathering the stories of homeless people in Worcester.