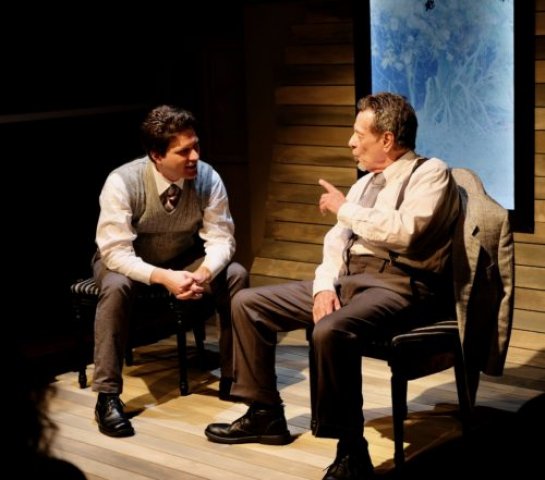 “But why did he come to Copenhagen?   What was he trying to tell you?”  This opening line by the deceased Margrethe Bohr is the entry point of Michael Frayn’s multilayered delight of a Tony-winning Best Play – equal parts science lesson, mystery, biographical drama, and morality play.  The question refers to the 1941 visit by German lead atomic physicist Werner Heisenberg to the home of his former mentor Niels Bohr and his wife, Margrethe.  By this point, both men were Nobel Laureates in physics, the Dane in 1922 and the German in 1932, but now, Denmark is occupied by Nazi Germany during World War II.  The crux of the matter goes beyond 1941, and its moral center asks what the two men did during the war.

The three-hander moves back and forth seamlessly among four time periods – 1924-27 when Heisenberg was Bohr’s assistant and the two spent endless hours in fertile speculation and investigation; 1941, the time of Heisenberg’s return visit; 1947, when the scientists meet after the war, each having played important roles on opposing sides; and finally, a post-mortem, when the three subjects of the drama seek a final reckoning.

Much of the play is about the evolution of modern physics, particularly the role of the protagonists and their colleagues leading toward the study of fission, essential to nuclear reactors and ultimately the atomic bomb.  Margarethe always insists that Niels describe his science in a manner that she, a lay person, could understand.  The scientific content presented is not only surprisingly understandable, but highly riveting.  Regrettably, it is sometimes delivered at too rapid a rate for the amateur to process fully, but nothing is lost in the overall understanding or appreciation.

Although the two had often clashed amiably over physics, war has created a political divide with associated suspicion.  Heisenberg claims to reject the Nazis, yet he is still dedicated to his homeland, which he sees as the center of Europe, and raises the question whether as a physicist he has the moral obligation to create weaponry for Germany.  After the war, he would argue that there was no blood on his hands from his work, but Bohr, who escaped Denmark, became a member of the Los Alamos project that designed the atomic bomb.

Interestingly, as Bohr defends his actions, his arguments lack power, and the playwright fails to arm him with Harry Truman’s reasoning.  As tragic as these massive deaths at Hiroshima and Nagasaki were, they ended the war and prevented what may have been even a greater number of American deaths had the war dragged on.  Truman insisted that it would have been a betrayal of his own people not to drop the bombs.

In addition to character and historical revelation, the play examines the randomness of existence from the smallest atom to all of civilization and how the outcomes at each level are suspended by a slender thread.  Consider that in a nuclear chain reaction, an atomic proton collides with an electron but its ensuing course and consequence are unknown.  Consider that when a traveler faces death because an SS officer is so exhausted that he would find it easier to pull the trigger than to read the man’s travel pass, yet the officer is placated instead by an offering from the traveler that the officer could have seized in any case.    Consider that but for a single, well-placed German humanitarian, 8,000 Danish Jews would be transported to concentration camps rather than spirited to freedom.  Consider that when a brilliant German scientist who always attacks assumptions makes one himself, his mistake (or is it?) overstates the difficulty of the task, setting back Germany’s quest for an atomic bomb.  Or consider that a madman decimates his trove of scientists and deflects funding away from theoretical science that can deliver the bomb.  What if? What if? What if?

This spectacularly thoughtful narrative plays out in perhaps the most intimate regular theater venue in the Bay Area, the perfect setting for the play.  The characters pace and circle, sometimes delicately sparring, other times passionately landing body blows.  Watching is like sitting ringside at a boxing match, but replacing the physical violence with the intellectual pyrotechnics of two world champion thinkers.  And let’s not forget Margrethe as the Greek chorus.  She narrates from time to time but also serves as a more reliable memory and  produces social and philosophical insights that escape the scientists.

Bruce Coughran directs, maintaining a high level of tension and anticipation throughout.  Robert Ernst portrays Niels Bohr, aptly displaying the great intelligence and uncommon leadership that motivates not just innovations, but breakthrough movements.  He bears the weight of tragedy but exalts in righteousness.  Aaron Wilton is the younger Werner Heisenberg.  He captures the anxiety that his character faces and the naïve self-assurance that he as an eminent scholar can determine the destiny of his science in the face of a political world that he can’t control.  Nancy Carlin exudes the self-confidence of Margrethe, who often possesses deeper understanding than the men.

There is much more to say, but too many words have already been written.  Copenhagen and this production have much more to offer and should been seen.