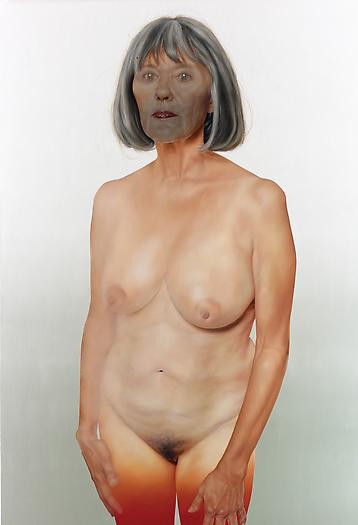 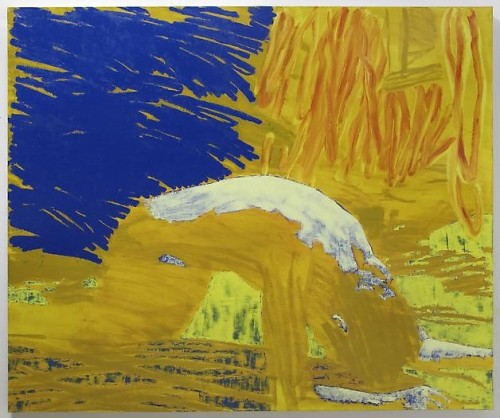 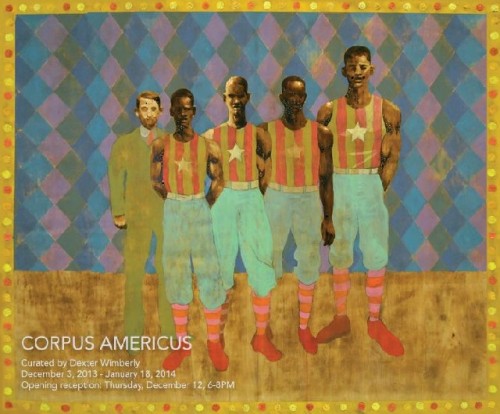 I’ve not been to a wax museum but I can imagine the Frankenstein on display might look something like Corpus Americus, the new group exhibition at Driscoll Babcock. Then again, the better analogy might be in the source material itself, in Shelly’s nameless creature who to this day stalks the starless wilds of our imaginations. For beneath the patchwork of skins stitched loosely into an ungainly whole, there is indeed something alive at the heart of Corpus Americus.

The animating strike is the question, “what does it mean to be an American today,” an idea that resides as much in abstract notions of America as in a chimeric Americana, in those fabled high periods of yore. America today is a country far downwind from those onetime peaks, and in the lowlands things have begun to smell a bit foul. The stench no doubt lifts from the Corpse Politicus, our national institution that’s been so supremely bungled by the very leaders we entrusted with its care. It should be noted, if we are to ground this exhibition in the current moment, that America is a nation assuredly polarized, and the rift is unflaggingly wrenched wide by “representatives” who insist on dividing our national oneness into a sumless, disunioned bunch.

To be gay in America, immigrant, pregnant, jobless, uneducated, uninsured, hungry, without heat; all speak to a political beyond the personal. Further pushing our private selves into the political sphere is the fact that we as citizens are now routinely surveilled: our phone calls, emails, online searches, purchases, our point-by-point movements throughout the day. All of which makes us, whether we like it or not, political beings who possess a certain anxiety-producing potential, a truth that terrorizes our government enough to warrant an obsessive homeland reconnaissance.

The press release for Corpus Americus acknowledges these tensions in citing Habeas Corpus as derivation for the exhibition’s title. Translating as “you shall have the body,” Habeas Corpus, the release states, “is an important, often-manipulated legal instrument safeguarding individual freedom from arbitrary state action.” The theme, then, offers a rich platform for raw, unchecked expression and, one would’ve hoped, fearless interpretations of what it means to be an American today. So it is curious how tepid some of the works in this exhibition are, or how unspecific they are to any experience uniquely American.

From another angle, namely curatorial, I puzzle at an allowance for artwork that fails to explore the implicit tensions in the show’s title and explicitly addressed in its stated theme. Certainly some do, but easily a third of the works do not. For instance, how does Margaret Bowland’s The Tea Party, a well-crafted painting of two children lazing in their party dresses amongst fine linens and a goose, articulate a “distinctly American” experience? The goose brings me straight to Europe, but that might be my own skewed reference points. Instead, I’ll drop my focus to the lower registers of the painting where an oily-milky substance pours down from on high and splashes in at the girls’ bottoms. Are we to infer something American in this? Might there be some veiled environmental commentary about, say, how current practices in the oil and agricultural industries are dirtying or endangering our children? Perhaps, but then the girls in the painting remain perfectly untouched.

More specific to the curator’s own citation of Habeas Corpus, one has to wonder how The Tea Party is anywhere in the same universe as “safeguarding individual freedom from arbitrary state action”?  The same questions arise when looking at Simon Leigh’s Cowrie #82, a glazed stoneware representation of, well, a cowrie. The piece feels so oddly out of context in an exhibition attempting to explore meaning in being a citizen of this land that it demands your full and considered attention for no other reason but to understand its placing. What is it about a sea shell, this sea shell, that speaks to the American experience? I walked away clueless. Still, there are a handful of strong representations in this intimate, twelve-piece show.

The standout is Doran Lanberg’s, On All Fours #3, a work of brute eloquence that communicates the full poundage of what it means to be an American in the first decades of the 21st Century. The painting sits just on the representational side of abstraction, an ambiguous medial that in itself speaks starkly to a now generalized American experience–that of alienation, isolation and despair, of feeling unseen, unrepresented, and permanently on the out.

The figure in the painting is a muddied totality of it all and his body no longer bears the weight. He is fallen to such an extent that it implicates each one of us, while as a society we are all the more culpable for allowing such wholesale slippage to occur in our midst. Few amongst us would note this one’s plight for he is so far sunken, more of soil than flesh, a mere mound of ochres and raw umbers that hint only minimally at a presence. While the forces dragging him low seem nearly gravitational, as if from the inward collapse of some existential black hole, what keeps him there is the crushing tide of the world around him which crashes-in at his back in broad and abrupt strokes of blue. America is not one for lifting its fallen, preferring they languish for the long, slow fade; on his own, the figure in On All Fours #3 will not be standing anytime soon.

A small delight in the exhibition is Mario Moore’s, Grisaille of Oshun.  Stylistically simple, with a palette straying little beyond the primaries, the painting is a gracefully understated study of an individual who is unmistakably American because she is so fiercely individual. Moore taps squarely into forces of womanhood that find equivalence in such natural phenomena as typhoons or earth-rending quakes. His heroine is all soldier, a panther in spirit who will tear the flesh from any fool who attempts a cross or any system that conspires to marginalize or estrange. It would be our error to believe she’s a sheltered thing come of age through shaded narrows of innocence, as might be inferred from the cover of an early issue of Jet magazine at her feet.

In its early years, Jet—belying their wholesome covers—steadily chronicled the grueling, often murderous struggle for civil rights. At the same time, the magazine offered a crucial, unchallenged voice to the nation-shaking ideologies of that movement’s towering leaders. Perhaps more relevant to the heroine of Grisaille of Oshun, Jet would later give prominent coverage to feminist/Black activist warriors such as Angela Davis and Kathleen Cleaver.

We’d be wiser, then, to assume the magazine at her feet is but one in a lineage of teachers in the art of war. Yet though her fist lies like a hammer at the ready, what allows her to lift into the highest representation of an American in this show is how open and easy she is, how ready to nurture and warm all who enter her care. To that end, she is as much an American archetype as a Woman for the ages.