Flashdance The Musical Near Ft. Lauderdale 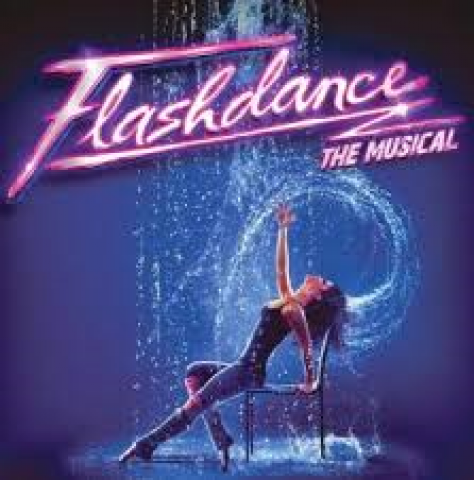 Alexandra “Alex” Owens, the heroine of Flashdance: The Musical, is supposed to shine in the spotlight during the stage show’s last scene.

She finally has the chance to wow the judges of the prestigious Shipley Dance Academy during her callback in a bid to become part of the academy. It’s a moment for her – alone.

Alas, that is not the case in Broward Stage Door Theatre’s uneven production of the musical, based on the 1983 movie set during that year in Pittsburgh. The mostly-faithful stage adaptation is set in the same city and during the same year.

During the scene, a chorus accompanies Owens to dance to one of the musical’s iconic, incredibly catchy songs, “What a Feeling.”

If you’ll recall from the movie, this is the moment after Owens slips up during her first try, resets the vinyl record, and is ready to show the judges all she’s got.

Instead, during Stage Door’s production, Owens is crowded out by the other dancers. She’s hardly the focus of attention, as she should be. After all, throughout the show, the welder/flashdancer has worked and wished her way to this moment. All the heretofore action has built up to this chance for Owens to triumph in front of the academy’s discerning judges.

Stranger yet, following what should have been Owens’ solo, the other dancers remain on stage. One of the judges addresses Owens. However, in this production, the judge appears to speak to the entire group. Director Paul O’Donnell, who is also credited with the musical staging, doesn’t even set Owens apart from the others. As a result, it’s not clear to whom the judge is speaking.

This awkwardly-staged scene is one of several problems with the production, which runs through Feb. 11 in one of the Margate venue’s two theaters. That’s not to say the production is a failure. There are several strong points in Stagedoor’s rendition of the theatrical musical adaptation, which has its own problems.

Perhaps one can chalk up the production’s issues to the fact that the reviewed performance was just the second one, a matinee following opening night.

The crew must work out the sound kinks, for starters. During the reviewed performance, the microphone belonging to Abby Perkins, who plays Owens, malfunctioned. The lights came up. Broward Stage Door’s executive producer/founder Derelle “Dee” Wilson Bunn stopped the show for about 10 minutes for technical staff members to repair the microphone.

As Bunn noted, such malfunctions can happen in live theater. One could hear feedback from the microphones throughout the performance.

The break in the show, which came just before intermission, occured during a scene between Owens and love interest Nick Hurley (Devon A.A. Norris).

To their credit, when Bunn stopped the show and the lights came up, neither performer broke character. It was as though they remained frozen in the moment, in character, and then simply went backstage so the technical staff could fix the problem. After they’d done so, the performers picked up from the beginning of the scene without indication that anything had happened. These are characteristics of mature, experienced actors. Norris and Perkins deserve commendations for not letting the interruption faze or distract them.

Perkins fares best during this sometimes tedious, sometimes exhilarating production. She invests Owens, a tomboyish woman ahead of her time, with an infectious, convincing swagger and a positive demeanor. Her performance is much stronger and more multi-faceted than Jennifer Beals’ too-often tentative take on the role in the movie.

She possesses a strong and expressive voice. Furthermore, her facial expressions deftly convey the emotions her character experiences throughout the course of the show. Whether Owens is assertive, determined, ambitious and confident, charming, down and blue, insecure, or emotionally hurt, Perkins conveys these emotions with seeming ease and sincerity.

The performer’s long, flowing hair sometimes gets in her face. However, the actress tosses her hair away so that we can see her vivid fexpressions. She moves her hair away without calling too much attention to the action, essentially making it part of her character.

Clad mostly in a sleeveless shirt and jeans,  she looks the part of a strong-willed, non-conformist working an unconventional job for women at the time. Her desire to succeed, despite any odds, makes it easy to root for her. Flashdance: The Musical, at its core, is a simple story about determination and having the right attitude while pursuing a career in the performing arts.

Unfortunately, the stage show is hampered by subplots which take the focus away from Owens (“Alex,” as she’s known in the show, further reinforcing her tomboyish ways).

The plight of a wanna-be comedian with no talent named Jimmy (a hapless Steddy Amory) and his strained relationship with a dancer adds little to the story. Jimmy doesn’t even seem committed to perfecting his comic timing, so it’s hard to care about the man. That’s no knock on Amory, who convincingly makes the character seem so pathetic as to be laughable. Another unnecessary subplot involving his strained relationship with a dancer named Gloria (an attitude-filled Emily Senn) also comes across as a distraction.

Hurley’s predicament at the Hurley Steel company is more central to the show. The higher-ups have ordered Nick to lay-off a number of employees; company officials are outsourcing their jobs. Perkins isn’t immune from the pink slip and neither are some of her friends. The young Hurley is torn between his allegiance to Perkins and company directives, creating conflict.

Norris could inject more charm into Hurley, making it easier for us to understand why Owens wishes to have a relationship with him. Norris tries to act tender and charming, but his Hurley is a bit too stiff and aloof. As a result, the chemistry between the pair is less than convincing.

When Owens isn’t working at Hurley’s company, she’s a flashdancer at a bar. This form of dance is sexy and highly physical. The flash dance look “celebrated a new kind of woman, independent, down-to-earth, athletic and sexy” according to encycolopedia.com.

Some of the flashdance sequences pack more heat than others. During the more sultry scenes, the dancers exhibit impressive stage presence, giving the sense that they “own” the stage. Lighting designer Ardean Landhuis’ use of red to convey passion is appropriate during these scenes. However, Landhuis needs to employ much brighter lighting during a scene in which Owens learns Shipley Academy staff have accepted her. This is an extremely bright moment for her.

The show’s heroine may exhibit low self-esteem at times. However, in the end, a little set-back is no match for “Alex’s” toughness, ambition and indomitability. Watching Perkins perform the role, you want to shout out “You go girl!”

A similar feeling of exhilaration envelops you as you listen to the cast sing with vibrancy the two recognizable, incredibly upbeat songs: “What a Feeling” and “She’s a Maniac.”

For the most part, the other songs feature pedestrian lyrics and forgettable tunes. But it’s impossible to forget the showstoppers. It’s not an exaggeration to say they’ll remain forever etched in your mind.

“What a Feeling,” in particular, beautifully expresses our heroine’s situation.

Well, I hear the music
Close my eyes, feel the rhythm
Wrap around
Take a hold of my heart

Flashdance: The Musical continues through Feb. 11 at Broward Stage Door Theatre, 8036 W. Sample Road in Margate. Tickets are $48. Student prices are available with a valid ID. Showtimes are 2 p.m. Wednesdays, Saturdays and Sundays, as well as 8 p.m. Fridays and Saturdays. For tickets, visit www./www.stagedoorfl.org or call (954) 344-7765.