Part of the Dickie Brennan Franchise 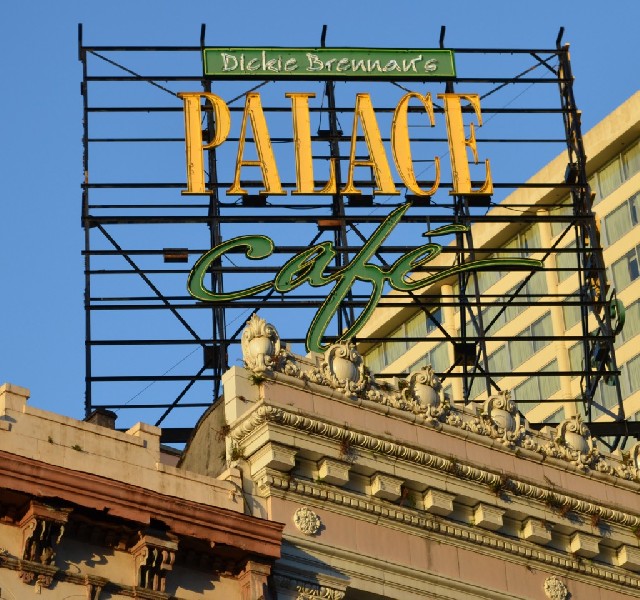 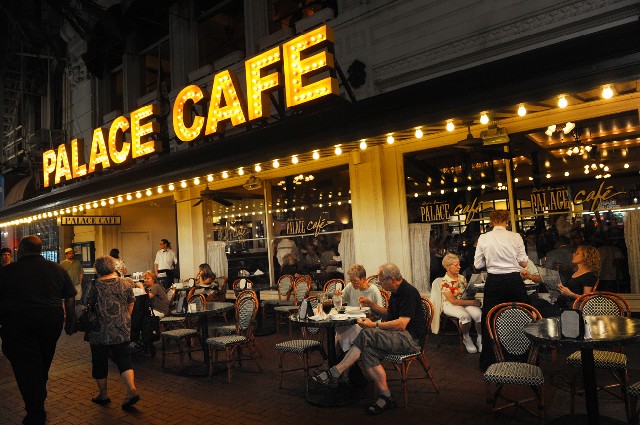 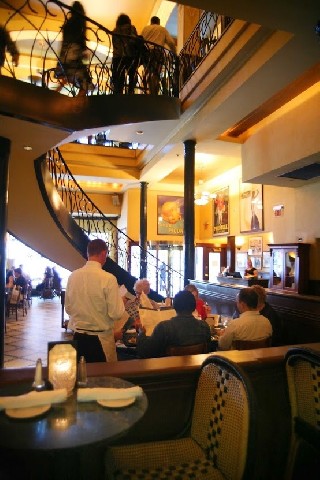 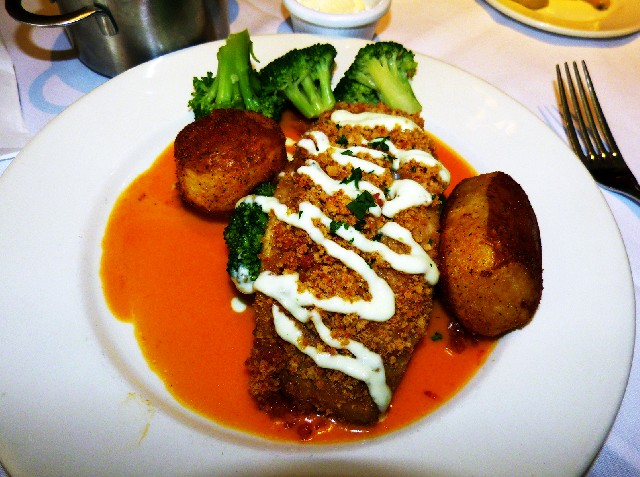 The fish dish was attractively plated and satisfactory. 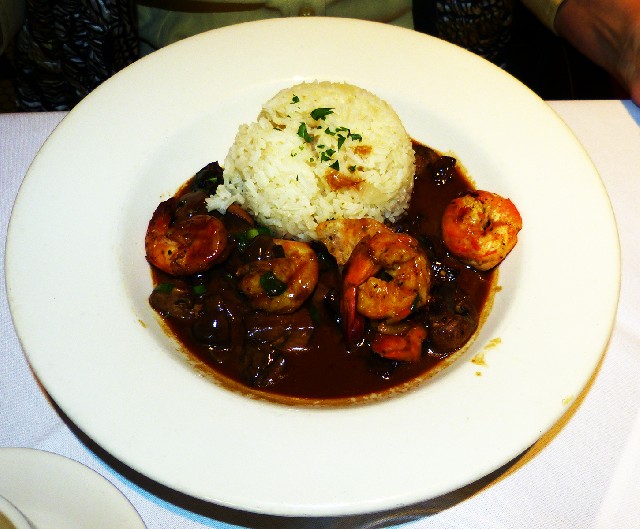 The Gulf shrimp plate was an utter disappointment. 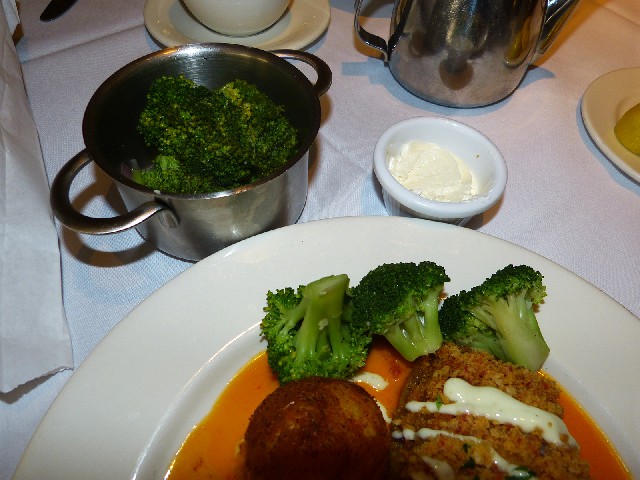 There was nothing special about the side dish of steamed broccoli. 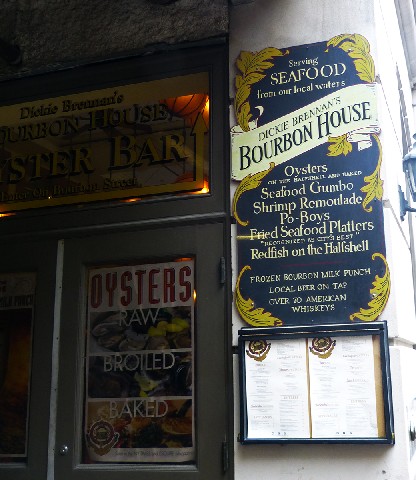 Another of the Dickie Brennan restaurants.

On our first night of exploring the French Quarter we headed back to the Crowne Plaza on Canal Street during prime time for dinner.

We were tired and hungry but not willing to endure the long lines at most popular restaurants.

Not far from the hotel on Canal Street the Palace Cafe was an option. There was an area for diners on the sidewalk. That seemed enticing although with a view of a busy commercial street rather than the eccentricities of the quarter.

We inquired but opted against the hour wait.

By now pretty much exhausted and famished we settled for a fast food restaurant.

Given the tight schedule of events for our theatre conference there was a generally narrow window for dinner before hoofing to a performance.

Setting out early enough, and not willing to take our chances with lines in the Quarter, we decided on the convenience of Palace Cafe.

Although outdoor dining was available in early Spring the evening was a bit too chilly.

Inside there was immediate seating in a large but undistinguished space. The most dramatic design feature was a winding free standing staircase to an upper level.

It was fun to see a group of kids dining on prom night.

The waiter was attentive and helpful.

After some questions we ordered.

We both focused on Gulf seafood.

I asked the waiter about Covey Rise Farms Vegetables, Chef’s daily selection of seasonal, local vegetables ($7). It proved to be a portion of steamed broccoli. Overall I like broccoli but this was no different than what we routinely prepare at home.

Palace Cafe appears to be the most generic of the several NOLA restaurants operated by the Dickie Brennan franchise. We had already tried and been utterly disappointed with the high end Tableau. The Cafe, with a more moderately priced menu, had none of that restaurant's pretensions.

With Brennan branding, one of the most renowned family names for NOLA cuisine, however, there is a certain expectation of quality regardless of the price.

My fish dish was perfectly fine if unexceptional. The presentation was attractive.

When the waiter came to clear and asked how the meal had been Astrid gave him an unanticipated but honest answer.

"Coming to New Orleans I expect to enjoy fresh and tasty Gulf shrimp. These shrimps are definitely not fresh. They taste thawed and lack flavor and texture. I am not convinced that they come from the Gulf."

After a week of spending a lot of money for too often mediocre food, as she later explained, Astrid was more fed up than well fed.

In New Orleans it should be safe to order seafood.

Truth is that we have had better and cheaper meals at Red Lobster and even Olive Garden. The national chain restaurants maintain standards of quality control and understand the price vs. cuisine levels that keep customers coming back. In the Dickie Brennan franchise it's a one off. A disappointed tourist will pay the bill, perhaps post something on Yelp or Trip Advisor, and not be back any time soon. There is always the next uninformed tourist looking for fine dining.

Leaning forward in something of a shocked bow the waiter just gasped "Really." He whirled about and hastily retreated.

We absorbed the shock of the encounter and waited for the check.

After an interval the manager Jake McLaughlin appeared. In a rather pleasant manner he assured us that the shrimp was fresh. He offered to bring some from the kitchen to show us.

I countered by stating "If you order seafood in Gloucester you know for sure that it is fresh and tasty."

Surprisingly he revealed growing up in Gloucester.

So did I during summers in Annisquam.

It was fun to compare notes and banter.

The exchange was cordial. But it didn't improve the product.

Significantly there was no effort by the manager to compensate an unhappy customer.

Politely I informed him that we would be writing this review.

In this instance yet again the Dickie Brennan franchise struck out big time with the media.

If you plan to dine in the French Quarter caveat emptor.

Or bite the bullet and pony up for the famous old restaurants.

Perhaps that's what we'll do the next time.