At Home with Photographer Matuschka 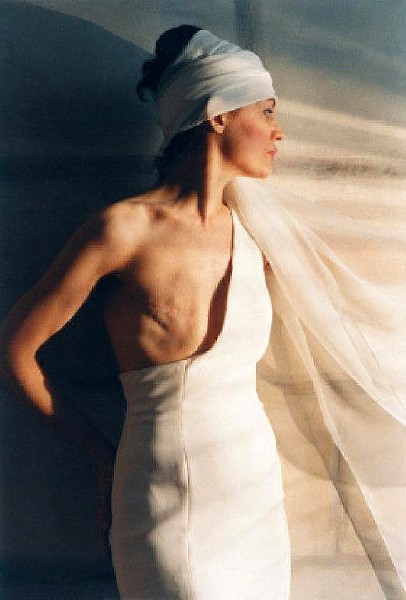 Matuschka set up, posed for, and shot this iconic 1993 image in her New York apartment. 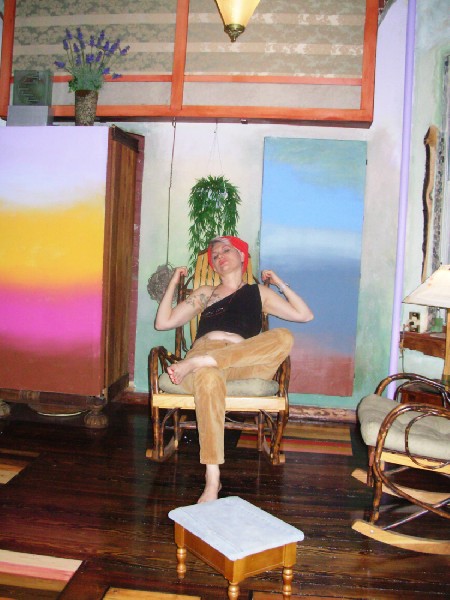 Matuschka at home in her private paradise. Giuliano images 2007. 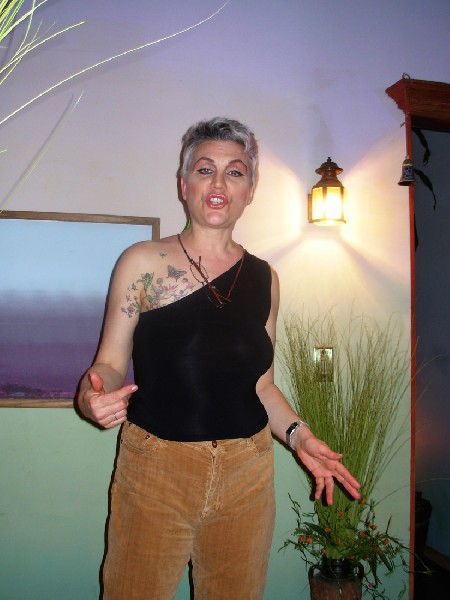 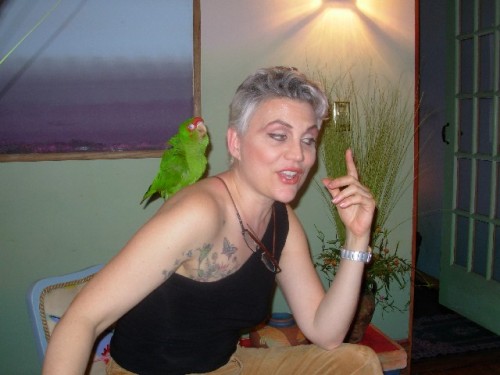 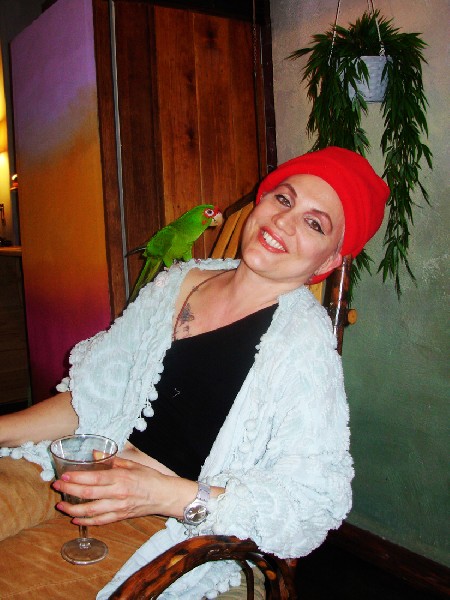 (During her opening at Sohn Fine Art, 6 Elm Street, Stockbridge yesterday Matuschka asked what happend to that piece I wrote in 2007? Back then there was a falling out. At the time I was too busy for the high maintenance of dealing with an interesting but strong willed artist and her crazy fucking parrot. She now has three. Good grief. Things change. So here is a bit of flashback. In another piece I will review her current show and update how she is back in the news because of the elective surgeries of Angelina Jolie.)

I knew of her before I knew her. Perhaps that's true for you as well.

The image on the cover of the New York Times Sunday Magazine. Frontal with an amputated breast. The story of Matuschka a former model. The iconic self portrait now included in an exhibition that will tour the world. In the company of other photographs viewed as among the best of an era.

Our paths crossed later. It turns out we had mutual acquaintances in the Berkshires.

There was some flirtation as she liked my writing and I was drawn to her celebrity. Then that expanded into her current work.

She was a bag lady.

That requires some explanation.

A New York thing for ladies to titubate around town, hopping in and out of cabs, with shopping bags. Glossy trophies of credit card freak outs  at Victoria’s Secret, Bloomingdale’s, Saks, Versace, Anne Taylor that kind of thing.

Really, I don’t know much about this and can’t relate. Charlie don’t surf. Or shop.

Like I’m not a frail and don’t live in New York.

Mostly I buy stuff at outlets when it’s on sale. Like a bunch of cowboy shirts from our 6,500 miles road trip a while back.

Perhaps why she lives in New York. All that shopping. Must be heavenly.

Dragging the loot back to an uptown pad she has brilliantly transformed into her private paradise. With the Mini Cooper, the perfect compact but powerful, car parked outside. You can always find just enough space for a Cooper.

Matuschka has the city thing down pat.

We met in her NY digs to talk about her life, work, and survival of the planet.

It went well. I was getting to know her. As much as you can ever know anyone. There were a lot of e mails in between. Talk about a possible book project and how I might help. Perhaps even ghost writing an auto bio. She sketched out scenes from a fascinating life. From tough childhood as Joanne to metamorphosis into celebrity. The malpractice lawsuits and conflicts with feminists claiming that she was exploiting her mastectomy.

The settlement gave her options for other things. To live and create with some independence. We talked about investment strategies. That was before the market crashed and tossed us into the air. She says she did OK.

There was a publisher, an interesting guy from the Berkshires, John Gams. (now deceased) He was putting out some ambitious books with Hard Press Editions. I reviewed one and we got to talking. For a time pretty lively discussion about possible projects.

She showed me those shopping bags. Used all the times like a handbag or purse. But she didn’t like the logos.

Which is what most women covet actually. So Sexy in the City.

It always struck me as funny. Those ordinary women on the subway with their Victoria’s Secret bags. I definitely did not want to fantasize about them in their skimpies. Those models on TV are so hot but these women mostly are not.

The beauty thing. So competitive. Imagine going through life as a Plain Jane?

For a guy no big deal. You can make money or be famous some other way. Some real doggy guys are chick magnets.

But a woman. She has to be beautiful. Though J Geils sang “First I look at the purse.”

Me, first check the face, then the rack, from there to the butt.

Matuschka got famous for a half rack. Isn’t that weird. Hey, whatever it takes.

She would alter the bags. Collage them. Still functional but under cover.

That morphed into bag art. She showed me some. They were beautiful and intriguing. How she took something that signified glamour, commerce and branding. With a few twists turned it into compelling art. Working with artists, printers, designers and publishers. Trying to get everyone on board to make her more famous.

But not as Matuschka. She talked about some other name. A handle for the new work not to be confused with Matuschka who is old work.

Again, a chick thing. Switching identities like changing clothes or putting on makeup. A snake slithering out of an old skin. Guess you don’t get very far being Joanne. That was a few identities ago pushing a hack around the city during tough times.

Sure, I was willing to help. Still am I guess.

Things were getting serious. Planned another sit down. Started with pizza around the corner. Then back to her pad for some serious chin wagging and strategic planning.

The parrot changed that.

She had been away and the parrot boarded with a family member.

Have you ever tried to reason with a parrot?

It was a flippin’ nightmare. There was no way I could take notes. She cried and had a melt down. Seems the parrot is a lesbian.

After that things fell apart. Blame it on parrot fever.

The book came out. I saw a copy in the bookstore at Mass MoCA. I e-mailed for a reviewer’s copy. She said buy one and help the cause. I didn’t.

Then the publisher croaked. It seems, get this, Swine Flu. He’d had a string of bad luck.

Now a new book project. Who knows what will happen this time.