Michael Feinstein and Friends at Tanglewood

Pops and The Great American Songbook 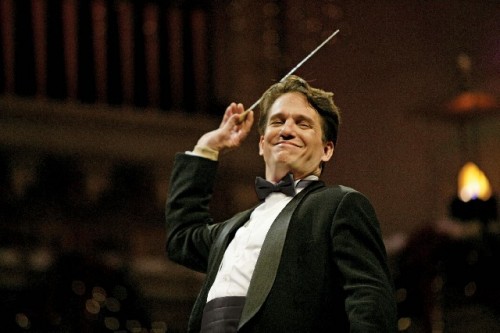 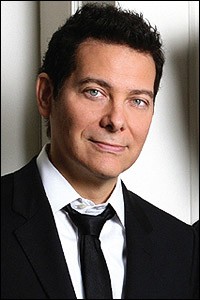 Michael Feinstein is an advocate for the Great American Songbook. 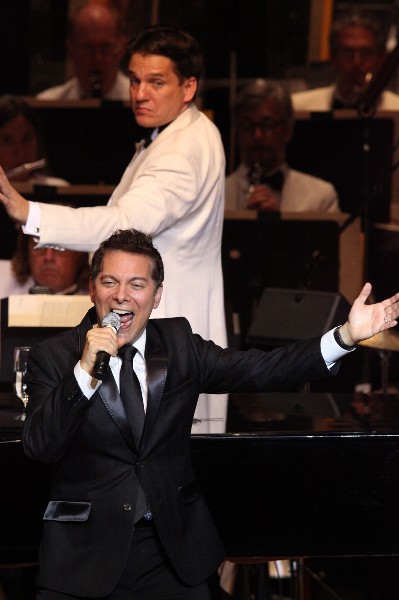 Feinstein and Lockhart at Tanglewood. BSO photos by Hilary Scott. 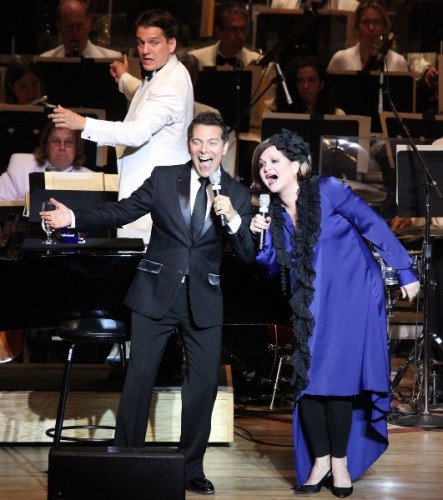 A duet with Faith Prince. 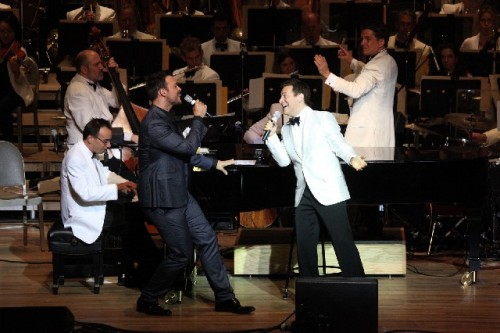 Squaring off in song. 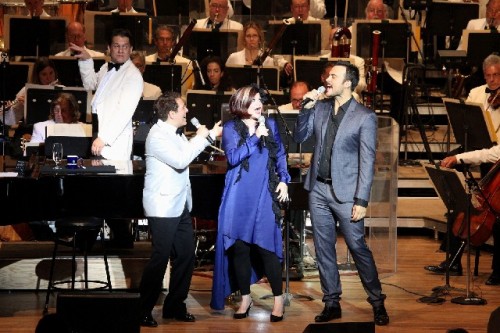 A rousing finale Under the Yum Yum Tree.

It was a chilly August evening in the Shed, with hints of Fall in the air, for a performance by Keith Lockhart and Pops. In a stunning return to Tanglewood Michael Feinstein and his special friends Broadway stars Faith Prince and Cheyenne Jackson brought their A game, Great American Songbook to an appreciative audience.

The program featured two sets each divided by half between Lockhart leading the orchestra through medleys then Feinstein and one of his two guests. For the finale the three singers combined for the Sammy Cahn/ Jimmy Van Heusen song “Under the Yum Yum Tree.”

Underscoring the theme of American Songbook the Pops performed a tribute to the movies as a source of so much great American music. It was an interesting precursor to the annual John Williams Film Night slated for August 24 with Tony winner Audra McDonald as featured guest artist.

It was actually a John Williams arrangement of the iconic “Hooray for Hollywood” by Whiting/ Mercer which launched the concert. That was followed by the familiar score to, as Lockhart put it,  “The longest film ever to win an Academy Award as Best Picture Gone with the Wind.”

In a running commentary with the audience we learned that “Unchained Melody” by North/ Zaret, arranged by Holbridge came from one of the first Broadway shows with an integrated cast Ghost. Audiences weren’t ready for that and it closed in a month. The song became a hit for the Righteous Brothers in the 1960s.

The percussion section dominated in the throbbingly exciting theme for the film Lawrence of Arabia by Jarre. If memory serves the exotic score accompanied a battle scene in the desert.

Over the orchestra playing “Strike Up the Band” we first heard but did not see Michael Feinstein. After an introduction by Lockhart he entered singing and took over at the piano. He would return to the piano several more times during the evening alternating with his accompanist Tedd Firth.

“I am so pleased, thrilled and honored to be here again at Tangelewood” he said “It is such a joy to work with Keith Lockhart and the Pops.”

Back in April, during a meeting of the American Theatre Critics Association, we attended a performance by Feinstein and Barbara Cook at the magnificent new Performing Arts Center in Carmel, Indiana for which he serves as its artistic director. The complex also houses his every growing archive and research center. After the performance he and Cook met with the ATCA group and engaged in a lively dialogue. We learned details of his diverse commitment and strategies to preserve a great and endangered cultural legacy.

PBS has invited him to make another program in addition to his previous broadcasts. Feinstein has an encyclopedic memory of the American Songbook. The Carmel based foundation sponsors an annual competition to discover and develop young singers to continue the tradition.

He discussed his six years of working with Ira Gershwin (December 6, 1896 – August 17, 1983). On the 100th anniversary of his birth Feinstein paid tribute to lyricist Sammy Cahn who often partnered with composer Jimmy Van Heusen. He was nominated for 23 Academy Awards and won four times.

Feinstein performed their “Hell Hath No Fury Like a Woman Scorned” and the Frank Sinatra standard a torchy “All My Tomorrows Belong to You.” He followed with another of their songs for Sinatra “All the Way” from the film The Joker. For this he accompanied himself on piano with the addition of bass.

Introducing Faith Prince she dedicated her appearance to Eydie Gorme who passed away on August 10. She sang “What Did I Have That I Don’t Have” set to lyrics by Barbra Streisand. She is currently on Broadway appearing in a revival of Annie. She won a Tony and other awards for Miss Adelaide in a revival of Guys and Dolls.

Although they have been friends for years joining her for a duet “Side by Side” he commented that it was their first time working together.

While an advocate of American Song he acknowledged that some great work from “The Other Side of the Pond” had made its way to Broadway and become a part of the canon. He changed the gender of “As Long as He Needs Me” from the 1960 musical Oliver.

Inevitably the set included a song by Cole Porter “It Was Just One of Those Things.” The familiar standard was included in the 1935 musical Jubilee. The show was trashed by critics who reported that it contained “nothing memorable.”

Oh critics. What do they know.

Here Feinsitein hit his sweet spot really swinging the tune and playing above and below the mid line maintained by Lockhart getting the best out of the Pops orchestra.

Following intermission the orchestra played a medley of songs made famous by Fred Astaire “Top Hat, White Tie and Tails” “I Won’t Dance” “Dancing in the Dark” “The Continental” “Change Partners” and “The Carioca.”

Feinstein returned with “Without a Song” then by Jerome Kern and Dorothy Fields a song for Astaire “The Way You Look Tonight.”

Introducing Cheyenne Jackson he sang the improbable “Mad Girl’s Love Song” based on a poem by Sylvia Plath.

They performed a lively duet of “Me and My Shadow.”

Thanking the audience and announcing one more he sang “For Once in My Life.”

Then they all came back for “Under the Yum Tree.”

As is traditional for a Pops concert the encores ended with “Stars and Stripes Forever” as the audience rushed to beat the traffic in Lenox.