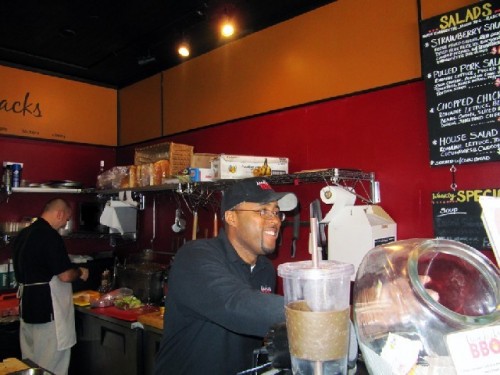 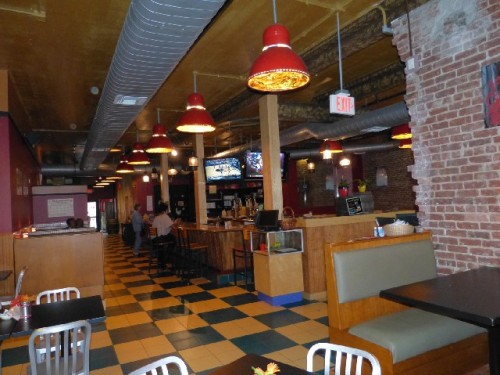 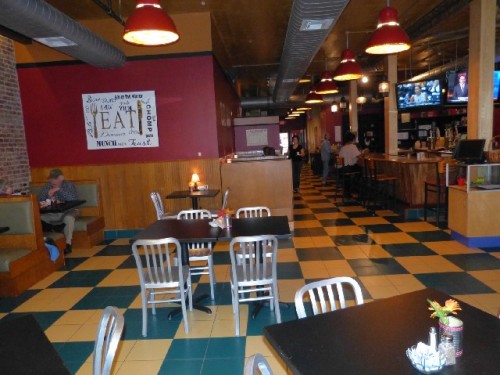 Another view of the new restaurant. 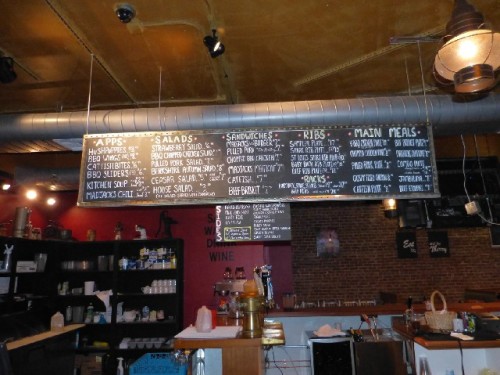 The blackboard menu is suspended over the bar. 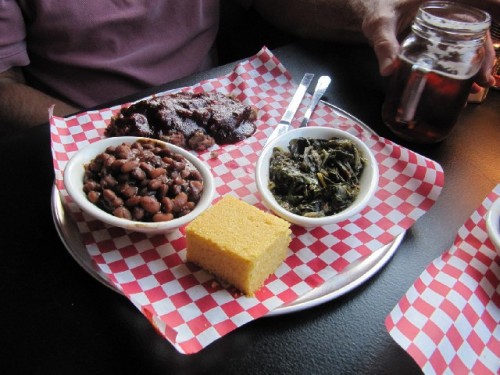 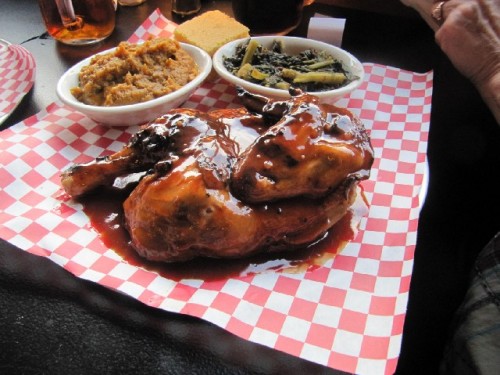 The barbecue chicken plate with a sweet and tangy sauce. 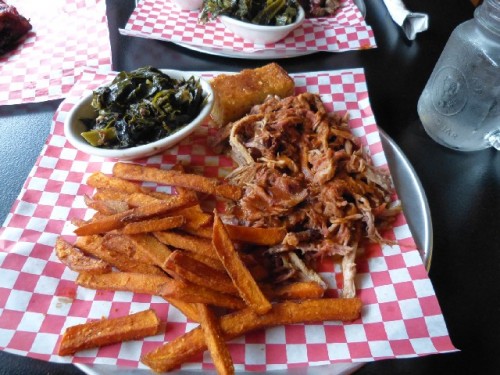 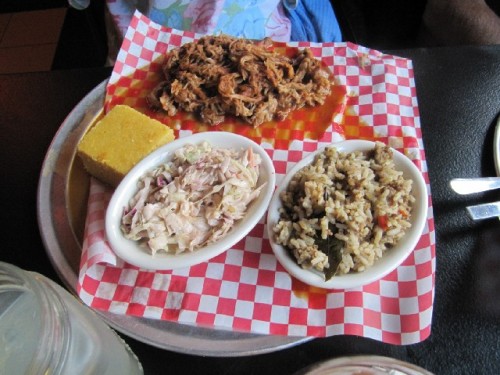 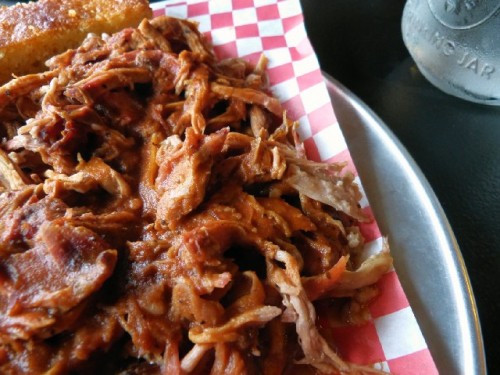 A detail of the pulled pork. 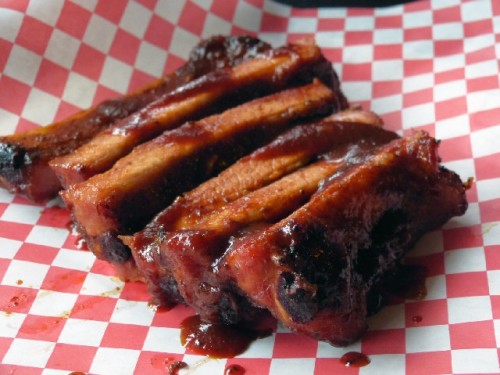 A half rack of St. Louis style ribs. 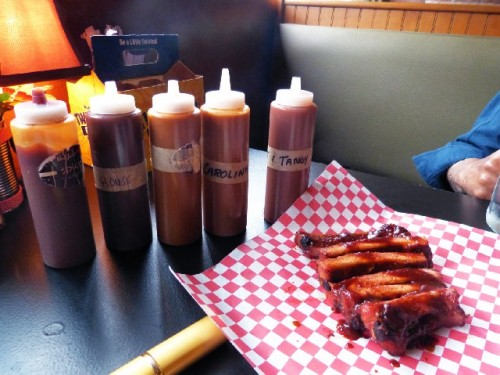 Five sauces to choose from. 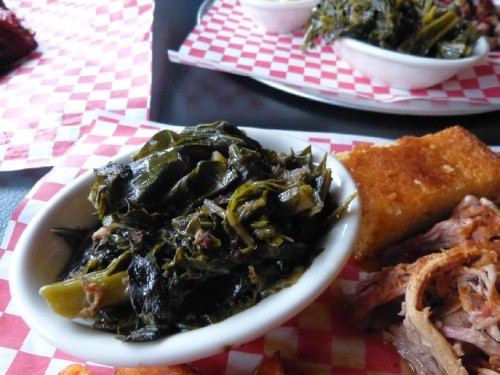 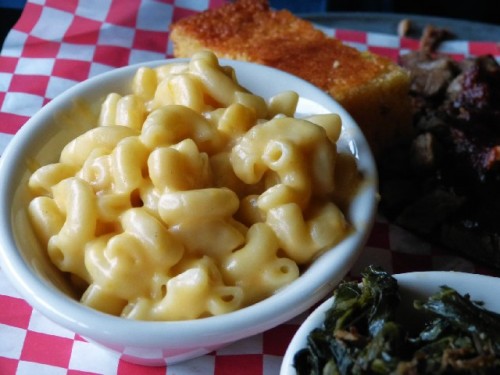 A year ago The Pit Bulls, Pancho and Cisco, launched their Berkshire barbecue project which was later expanded to embrace a broader range of cuisine.

It started with Jack Jack, which proved to be a disaster, and the more promising Mad Jack’s then a hole in the wall joint on Fenn Street. Overall, it proved to be the most promising barbecue in the Berkshires. There was an ambitious but out of its depth Rub, in North Adams. which we both tried. It closed before we could visit for a review.

Several months ago Mad Jack’s moved to a large, prime space on North Street in the heart of downtown Pittsfield. We each visited separately with our sweetypies and friends.

During a dinner for four Cisco found the jambalaya ($9.50) no where close to an authentic New Orleans version. It paled by comparison to the jambalaya served by The Hub in North Adams which has just the right spice and heat. Its chef had spent significant years in the bayou.

Our friends on that occasion enjoyed the brisket and pulled pork. The BBQ chicken plate ($8.50 for a quarter and $10.25 for a half) was generous and smothered in a sweet tangy sauce.

The service on a busy weekend night was slow. Overall, we had a good, but not great, dining experience with friends who are barbecue fans.

Yesterday, the Pit Bulls arrived at a nearly empty restaurant at 1 PM for lunch. One table was leaving and there was a single customer at the bar. While we dined there was a table for four.

When we seated ourselves the single wait person took ten minutes to bring menus. Then was lost serving bar, on the phone for takeout, in and out of the kitchen. She appeared to be in perpetual movement but inattentive. We were low on her list of priorities.

Eventually, we had to track her down that we wanted to order. She acknowledged us followed by another delay.

We ordered the beef brisket plate ($9.75) and the pulled pork plate ($8.99). Both came with two sides. We each ordered the collard greens (superb), sweet potato fries (ok when served fresh which was not the case) and mac and cheese.

In order to write an adequate review we ordered a half rack of St. Louis style ribs ($9.00)

Pancho The change from a hole in the wall on Frenn Street to a prime location on North Street, next to Spice Dragon, is cosmic. The Dragon clan is culinary nobility. They know their stuff. Their son won Top Chef.

This is my third or fourth visit to this venue and there is a disconnect, engaging something beyond reach. Larger space, more tables, bigger overhead, full bar, all of that comes into play.

Often restaurateurs do not fully understand the mechanics. The technology. What it takes to run a restaurant.  There is a difference between cooks, you and I. You’re a chef when you run a kitchen. From my first visit to the new venue I realized that was a concept which was not grasped.

Cisco What we experienced with the original rib joint on Frenn street was a total focus on the food. There were just a few tables and the emphasis was on takeout. We reviewed a talented and interesting young cook (Jabari L. Powell). The food was a success and had a following. It sparked the ambition to make the move to a bigger space and become a full restaurant. But that upgrade comes with a new set of challenges and what we are feeling is less focus on the primary goal; control of the quality of food leaving the kitchen. The chef in charge of the kitchen is also trying to manage front of the house and that’s where the breakdown is happening.

In a successful restaurant of this scale and ambition there needs to be a chef in charge of the kitchen and a maître d’hôtel, head waiter, or hostess running front of house. A chef can’t manage the dining room from the kitchen. It has to be one or the other. That’s why service is so poor because there is no oversight.

Pancho My problem is the way it was presented. The food came cold. That is inexcusable. We sent it back and it was microwaved. It’s gone. That whole structure is gone. When it’s zapped it’s gone. It’s like the next day’s food. I’m not in that mood. I’m in a lunch mood.

For me this is absolute blasphemy. The lunch was cold which is inexcusable.

It’s not working for me. It may be my last visit. It’s my third visit (on North Street) and let me tell you every one of them missed. I may come back for dinner and if I do it will be my default beef ribs. Maybe one day I’ll try the baby back ribs.

The pulled pork was regular. Nothing special. Most pulled porks are. When I think barbecue the paradigm is Virgil’s in New York City. Why? Because Virgil’s is one of the three or four restaurants grandfathered for open pit. They are not illegal in New York but Virgil predates that ordinance. Or Sylvia’s in Harlem for soul food. Ask Bill Clinton about Sylvia’s. She died recently.

The ribs that we had today I wouldn’t even compare to what we had at Fenn Street. Again, leftover, next day food, served cold. The entire lunch, for me, was a next day lunch.

Cisco The ribs were trimmed not full ribs. Which is why I asked the waitress if they were the St. Louis style? She said they were.

(St. Louis Style ribs are trimmed to make a more uniform rectangular rack. The cartilage near the ends of the ribs are trimmed and are known as rib tips which may be prepared separately. The tough membrane is also removed.)

The (untrimmed) ribs we had at Frenn Street were big and meaty. A full meal. This was more like an appetizer (half rack $9). The preparation was different. Previously, the ribs were parboiled or steamed in foil for tenderness. That was not the case this time. The ribs were dry but lacked smoke. They were very generic compared to other barbecue restaurants. I liked them better at The 99. This was a major disappointment. You rate a rib joint on its ribs and these were C+ at best. On Frenn street they were a B. Which is perhaps as good as you can hope for in the Berkshires.

There were five sauces to choose from: House, Hot, Spicy, Sweet and North Carolina. Since they were all home made Mad Jack's gets extra points. For me the most enjoyable was the North Carolina with a vinegar base. I also liked the Sweet. The other three- House, Spicy and Hot- were fairly generic. None of the sauces sent me to barbecue heaven. But good to have options and variety. The pulled pork, in particular, needed this flavor boost.

I sampled all of the sauces on the tip of my finger, on the food, and applied to the dry,  uneventful corn bread.

Pancho This is culinary soul food. Soul is missing here. The food is an after thought. I’m very disappointed.